Editor's Note: DTN analysts Darin Newsom and Todd Hultman took shifts through Election Day -- and through the night -- to give readers a stream of market commentary on the latest developments in the election and market reactions.

The following is the commentary on the markets through the night, from most recent to early Tuesday evening.

One more and I am out of here! Financial markets remain relatively stable following a volatile post-election overnight session. DJIA futures are still down about 300 points while European equity markets are slowly extending gains. The US dollar index is down 0.575 as gold pushes its rally back to $30. Crude oil has turned higher, posting small gains after losing almost $2.00 Tuesday night. Grains remain under pressure Wednesday morning with soybeans down 8 cents, corn down 4 cents, and Chicago wheat off 5 cents. This brings to an end DTN's round-the-clock coverage of the election and markets. Thank you for joining us as the night's historic events unfolded. We now return you to your regularly scheduled program.

There's not much stirring in the markets at this point as the election driven wave of panic has subsided. However, European stock markets have stabilized, with most now down less than 1%. Meanwhile DJIA futures are off 280 points while the U.S. dollar index continues to show a loss of 0.250. Gold is still $27 higher, well off its earlier gain of $64. Grains are lower with soybeans down 9 cents, and corn and wheat both off 4 cents.

You don't have to let your mind wander far to imagine a reversal in some global financial markets Wednesday morning. DJIA futures have whittled the once 800-point plus loss to less than 300 points, while gold is holding onto only $26 of its early $64 rally. The US dollar index was once down almost 2.000, now showing a loss of 0.600. Things could get interesting as the morning progresses. As for overseas equities, Asian markets closed lower and European markets are trading lower early Wednesday. Grains are also still lower, though soybeans have erased some of the early sell-off, down about 9 cents. Corn and wheat are both 4 cents lower.

DJIA futures have cut loss by more than half, down 390 points. Gold still up $35, US dollar index down 0.550. All are moving quickly in the opposite direction of what was seen earlier Tuesday night. Grains still down with soybeans off 9 cents, corn off 5 cents, and wheat down 4 cents.

President-elect Trump: Sorry to keep you waiting, complicated business. Now is the time for America to bind the wounds of division. I pledge that I will be president for all Americans. Work together to unify our great country. Rebuild our infrastructure, put millions to work to rebuild it. We will double our growth and have strongest economy in the world. We will get along with all countries who want to get along with us.

Interesting to note that markets are recovering slightly as the band plays President-elect Trump to stage.

According to CNN, reportedly, Clinton called Trump and conceded. I have seen no confirmation of this. Markets aren't reacting to the potential news with DJIA futures still down 500 points, the US dollar index is off 1.250, and gold is up $43.

CNBC saying Mr. Trump is in the building and will likely make a speech, subject unknown given he doesn't have the 270 electoral votes yet. Markets have calmed, but are still nervous. Analysts saying he has to understand the enormity of the job and the task at hand.

CNBC asking if markets NEED to hear from one of the candidates tonight. As mentioned above, things have finally calmed down with DJIA futures off only 500 points, gold holding a $40 gain.

It's late in the game, literally, with some media outlets giving Pennsylvania to Trump. If so, that puts him at 267 electoral votes and leading in most of the states still in question. Markets have quieted, for now, with DJIA futures down 630 points, Japan's Nikkei off 920 points, the US dollar index falling 1.300 points, and gold up $47. You'll notice that most of these markets have moved well off session highs/lows. As for grains, there hasn't been much change over the last hour. Soybeans are down 12 cents, corn is off 6 cents, and wheat continues to show a 4-cent loss. Talk among some analysts has already turned to the likelihood of global trade wars, with most discounting the bulk of the threat at this point. But it is still early, the day after Election Day.

As the clock tolls midnight across the U.S. Midwest, CNN has the electoral vote at 238 for Trump and 215 for Clinton. Three states -- Wisconsin, Michigan, and Pennsylvania -- with 46 electoral votes combined are being hotly contested. DJIA futures have recovered some of the earlier losses but are still down 690 points. The ripple effects are also being felt overseas with Japan's Nikkei off 928 points. The U.S. dollar index is down 1.760 and gold is up $51.00. Grains remain under pressure, though off session lows. Jan soybeans are down 12 cents, Dec corn is off 5 cents, and Dec Chicago wheat has fallen 4 cents.

CNN has Trump leading the electoral vote at 232 to 209. Trump is also leading in key remaining states and the mood is reported as somber at the Clinton camp. Dow Jones futures are down 803 points, the US dollar index is down 1.8%, and Dec. gold is up $59.60. Grains remain lower with Dec. corn and wheat down 6 cents and Jan. soybeans down 14 1/2 cents.

CNN has the electoral count at 190-186 in favor of Clinton and commentators are saying it will come down to Wisconsin and Michigan -- both states where Trump is currently leading. This race may go deep into the night, but clearly, many are surprised that Trump is doing better than expected and the stock market is reflecting panic among investors which is partially spilling over to grains.

With Trump still doing better than many national polls indicated, Dow Jones futures are down 618 points, the US dollar index is down 1.1%, Dec. gold is up $37.50, and Mexican peso futures are down 7.4%. Grains are lower, but not as panicked as financial markets. Dec. corn is down 3 3/4 cents, Jan. soybeans are down 9 cents, and Dec. Chicago wheat is down 2 1/2 cents.

Technically, CNN shows Clinton with more electoral votes, but races are tight in key states and the financial markets are showing a strong Trump-friendly response. Dow Jones futures are down 206 points and Dec. gold is up $16.50. Grains are steady to lower with Dec. corn down 2 3/4 cents, Jan. soybeans down 3 3/4 cents and Dec. Chicago wheat down 3/4 cent.

Dec. corn is down 1 1/2 cents, Jan. soybeans are down 1/4 cent and Dec. Chicago wheat is up 1/2 cent. This is a quiet start and not unexpected, given Tuesday's higher closes. Dow Jones futures are up 73 points after CNN rewarded more electoral votes to Clinton after 7 p.m. CST.

The early pattern has been that gold futures go up when Trump votes come in and Dow Jones futures go up when Clinton votes come in. Currently, Dow Jones futures are up 34 points and Dec. gold is down 80 cents an ounce. Clinton leading in Florida, reports CNN with 72% of the vote in. Also leads in North Carolina with 28% of the vote in. Grains will be opening at 7 p.m. CST.

As we wait for polls to close, it may help to note that the Dow Jones Industrial Average closed up 73.14 Tuesday at 18,332.74. Dow Jones futures are up 35 points early Tuesday evening. Grains closed higher Tuesday and will re-open at 7 p.m. CST. 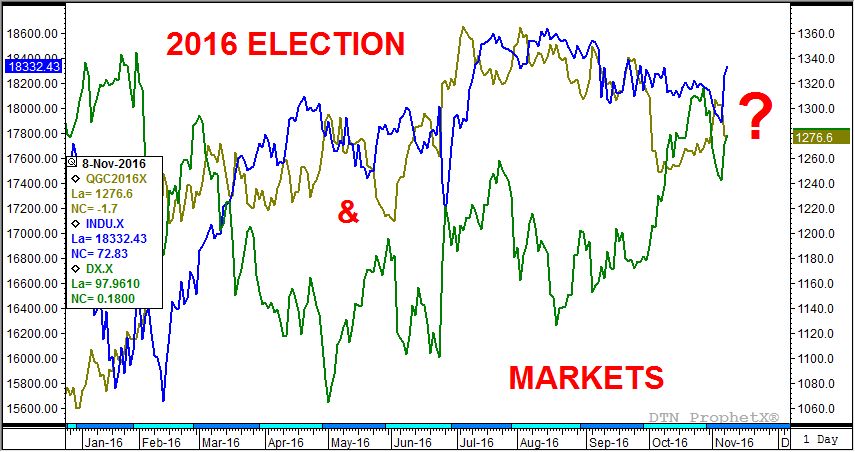