While various trucking and transportation-related industries have congratulated President-elect Donald Trump on his election victory, some people are wondering if recent regulations may be reversed and others are concerned if the poor state of the nation's infrastructure problems will be addressed by the new admiration.

Lane Kidd, managing director of the carrier coalition the Trucking Alliance, told DTN that he doubts Congress will reverse regulations it initiated, especially the most recent decision on electronic logging devices (ELDs) in interstate trucks.

"To roll back Congressional actions -- that would be farfetched," he said. The ELD mandate rule, presented in December 2015, requires most truckers currently using paper logs to transition to an ELD by Dec. 18, 2017. The rule will not apply to drivers in vehicles made before the year 2000.

On Nov.2, the Trucking Alliance, a coalition of freight transportation companies and other businesses that support safety reforms in the freight transportation industry, released a statement on its website applauding the 7th Circuit U.S. Court of Appeals Oct. 31 ruling. The ruling upholds a 2012 congressional mandate to require electronic logging devices (ELDs) in interstate trucks, after one of the largest truck driver groups had appealed to the court to overturn the ruling as unconstitutional. ELDs automatically record the hours that truck drivers are behind the wheel; monitoring and limiting the hours helps reduce truck driver fatigue and improve highway safety.

The news release said that court ruling was unanimous, and quoted Judge David Hamilton saying that with logbooks, it "is easy to insert an error ... whether intentionally or not" and that logbooks "have been ongoing sources of concern because they are easy to falsify." This ruling virtually assures that all interstate freight carriers must install ELDs in their trucks by December 2017, giving law enforcement a more accurate way to verify compliance with drivers' on-duty driving time.

The three-judge panel frequently cited the importance it gave to Congress and its mandate of ELDs in 2012, and wrote that "requiring ELDs was not left to the discretion of the agency; Congress mandated it" and later emphasized that "Congress did not instruct the Agency to consider requiring electronic monitoring, as it had in the Interstate Commerce Commission Termination Act of 1995. In 2012, Congress simply ordered the agency to require ELDs."

"The fact that Congress mandated ELDs, rather than relying on the FMCSA to simply promulgate a rule making, gave this issue much more weight," said Kidd. "Congress mandating ELDs will prove to be the pivotal point that changed the trucking industry for the better and a new era of safety and compliance."

He added, "The Trucking Alliance is making progress in promoting safety reforms in the freight transportation industry that can reduce the number of large truck accidents. We will be vigilant to maintain that progress and to continue to achieve even more reforms that can improve the safety for commercial truck drivers."

Kidd did mention that newly decided regulations for tractor-trailer emissions may end up becoming a target for the new administration. Phase 2 emissions regulations were finalized this past year by U.S. Environmental Protection Agency (EPA) and U.S. Department of Transportation's National Highway Traffic Safety Administration (NHTSA) and not mandated by Congress. "I can see where Congress could roll back or stall regulations initiated at the agency level," Kidd said. "There's a chance, but whether there's probability -- that's the big question."

Mike Steenhoek, Executive Director Soy Transportation Coalition (STC) told DTN that, "It will be important for the Trump Administration to present a tangible "win" in the initial days of the new presidency to assure the American public it has the capacity to govern effectively. So many of the other issues featured throughout his campaign -- immigration, Obamacare repeal, Supreme Court appointments, tax reform, etc. -- are highly divisive and will encounter strong opposition from Congressional Democrats."

Transportation issues may be less divisive for the politicians.

"Transportation infrastructure enjoys considerably more bipartisan support and may be an area in which the new president and Congress are able to get something done. In contrast to other issues, the benefits of transportation infrastructure investment are more tangible and less hypothetical to the American public. Once the investment has occurred, one can point to the physical asset that will provide benefit for years to come as an example of success. Transportation investment can also be distributed throughout the country -- allowing both urban and rural areas to enjoy its benefits."

Steenhoek noted that that President Elect Trump included the following statement in his acceptance speech: "We are going to fix our inner cities and rebuild our highways, bridges, tunnels, airports, schools, hospitals. We're going to rebuild our infrastructure, which will become, by the way, second to none. And we will put millions of our people to work as we rebuild it."

Steenhoek said he expects preparations will be made by Trump officials to develop an aggressive infrastructure plan that will be unveiled in the early stages of his presidency. "Of course," added Steenhoek, "the beguiling question will be how to pay for new investment. President-Elect Trump throughout the campaign offered little insight into the potential sources of funding. The willingness, or lack thereof, of Congress to collaborate with him remains to be seen."

I have spoken to various farmers and we agree that our nation's roads need to be maintained and improved because those roads are the gateway to agriculture commerce and farmers' ability to market their crops. It's not just our roads that need attention. Our waterways are in dire need of repair as the aging lock and dam system needs an overhaul and not just a Band-aid. Farmers near the river depend on barge shipments because it is another choice and sometimes better choice for them to market their grain.

The agricultural products and the agribusiness industry that has developed in the Mississippi basin produce 92% of the nation's agricultural exports, 78% of the world's exports in feed grains and soybeans, and most of the livestock and hogs produced nationally. Sixty percent of all grain exported from the U.S. is shipped on the Mississippi River through the Port of New Orleans and the Port of South Louisiana.

On Sept. 28, the House of Representatives passed the Water Resources Development Act (WRDA) of 2016 by a vote of 399 to 25. The Senate passed its version of WRDA on Sept. 15 by a vote of 95 to 3. The bill authorizes $9 billion dollars for inland navigation and water projects administered by the Army Corps of Engineers. According to various transportation groups, it is expected that Congress will entertain and pass the conference report during a lame duck session following the November election. Passing this important piece of legislation will be key to repairing and then keeping our waterways healthy. 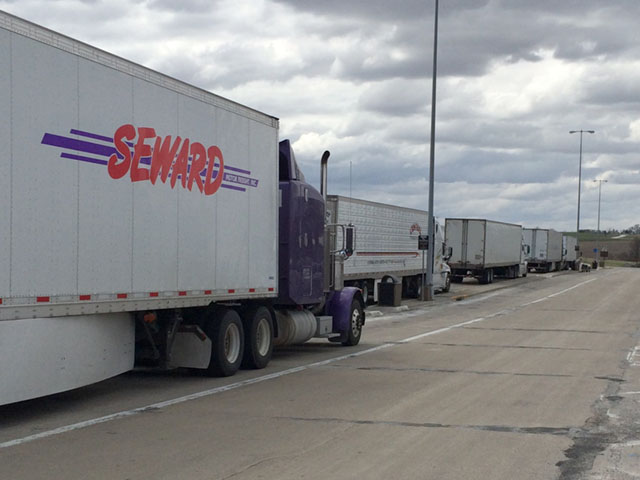