It's an annual ritual for attendees to climb in combine and high-horsepower tractor cabs and chat with specialists about equipment capabilities.

Some producers will spend hundreds of thousands of dollars this year on the latest Lexion harvester by CLAAS or John Deere's 8RX four-track tractor, which were both on display. Others may opt for cheaper, used big-ticket machinery.

A learning session -- "Economic Factors Impacting Your Machinery Purchases: Is Your Equipment an Asset or Liability?" -- at the event provided information to help make equipment decisions. Commodity Classic, held in San Antonio in February, is the largest farmer-led agricultural and education show in the United States.

Cameron Hurnard, director of data services for Iron Solutions, provided recent and historical prices on new and used combines and large tractors, along with depreciation figures. The company, based in Franklin, Tennessee, provides data and insights to help lenders and insurance companies guide their clients' equipment purchasing decisions.

Daryl Theis, head of marketing with CLAAS, mostly talked about how cost of ownership and technology play a role in buying machinery. The German company makes tractors, forage choppers and other equipment, but is best known for its combines.

"You get hit very hard on deprecation costs in the first year now," Hurnard said. "It's a pretty significant gap."

The price disparity started to widen during the commodity price boom in the early 2010s. Selling corn for $6 to more than $7 per bushel for a couple of years allowed farmers who typically bought used equipment to buy new, Hurnard surmised.

When commodity prices dropped, though, the price gap between new and one-year-old Class 7 combines didn't shrink. Depreciation between a one- and two-year-old machines is far less dramatic at only $25,000. Class 8 combine, 375 to 425 hp, price trends are similar.

"It's an unprecedented pattern," Hurnard added. "I don't think it will change going forward. The only way to make money (grain farming) is to be really good and efficient."

The desire to have the latest technology is a primary driver of new combine and tractor sales, especially high-horsepower units, Hurnard believes. Both have remained fairly strong despite the down ag economy. Large grain stocks, weak exports and now COVID-19 continue to put downward pressure on commodity prices.

In October 2019, the opposite occurred. AEM stats indicate new combine sales grew 8.1% compared to the previous year, while two-wheel and four-wheel-drive tractor acquisitions dipped 3.5% and 2.8%, respectively. However, 100-plus hp tractor sales grew 1.9%.

For combines, Theis contends horsepower has increased 6% the past 10 years and productivity has improved 10%.

"When you think about holding onto a combine, you have to consider the cost of the machine not performing as well (as a newer one)," Theis said.

CLAAS collected data on non-warranty parts and maintenance on 384 combines over a five-year period from its dealer network. Both cost $1,500, on average, for one-year-old combines. Year two was $2,500. By year five, the average cost was $7,500.

Machinery, particularly harvesters and high-horsepower tractors, continue to be one of the largest capital expenses for farmers. Understanding the economics and efficiency gains before purchasing is crucial to a producer's bottom line, officials said.

"Maintenance costs increase each year ... and every year you hold on to a machine, you fall %1 behind (in productivity)," Theis said. "You need to think about how long does it make sense before you trade for a new or newer machine." 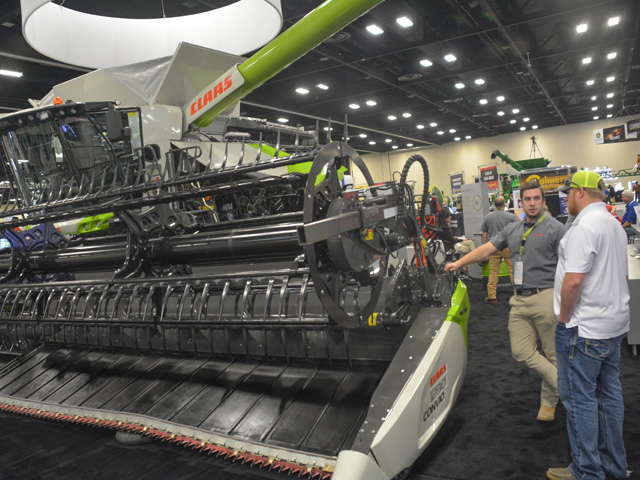