Soon the market will turn its attention away from how much corn was put in the ground to the fate of those acres that were actually seeded.

Given the lateness of plantings, it appears the 2019 U.S. corn crop will be behind the eight ball all growing season.

While USDA has been releasing corn crop progress markers such as percent planted, percent silking, and percent mature since the early 1980's, they only started recording the percent emerged since 1999.

With the 2019 crop planted at the slowest pace ever, we were curious what this mean in terms of the crop emerging from the ground, putting out silks ahead of its critical reproductive process and the percent that was mature or at "black layer" ahead of the first fall freeze.

This past week's USDA weekly crop progress and condition report indicated that 46% of the U.S. corn crop had emerged as of June 2.

We assume that the 50% market was hit the following day on June 3 so if this year's crop develops on average 50% of this year's corn crop will be silking by August 2 and 50% will be mature by October 4.

This means that the crop will be silking and maturing much later than normal, immediately bringing into question what impact this will have on yields when the corp is pollinating during a much hotter part of the summer than is usually the case, and over half the crop will be maturing past the normal first fall freeze date.

Note that forecasts for next week usher in much below temperatures for a large portion of the Corn Belt, hardly what a crop that is already far behind on growing degree day accumulation needs. 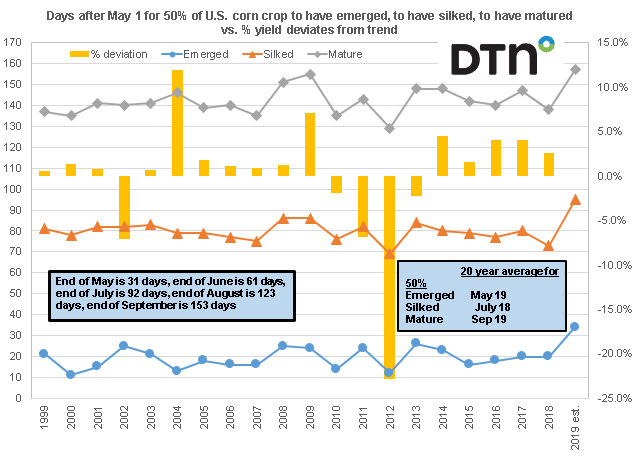