While the staggering delay in corn plantings is a nationwide problem, perhaps no state is as far behind as Illinois, the number two producing state in the nation.

In late March, USDA indicated in its prospective planting report Illinois farmers intended to seed 11.20 million acres of corn, but with the latest crop progress report indicating that a mere 35% of the crop was planted by May 26, this means that 7.28 million acres of ground have not been seeded.

This graphic shows the percent of the Illinois corn crop planted by May 26 going back over 40 years to 1979 on the left hand axis with the percent change in planted acreage from the March intentions to the final crop production report and the percent that final yields deviated from the 40 year (1979-2018) trend on the right hand axis.

We also plot the combined April-May precipitation in inches.

The data shows that corn seedings in Illinois are record slow with just 35% seeded by May 26, by far the lowest percent ever for this date and much tardier than seen in 1995 which was the second slowest season with 48% in the ground by 5/26/95.

Just focusing on these seasons, 1995 does stand out and may provide the closest analogy to what is being experienced this season.

Combined April-May 1995 Illinois precipitation was 13.36 inches which is the highest for these 40 seasons and that contributed to a 6.4% or 0.7 million acre decline in planted area from the March intentions to the final crop report and yields 17.4% below trend.

We should also mention 1996, which had the second highest amount of precipitation at 12.77 inches with acreage down 5.2% and yields off 1.8%.

Given how far behind Illinois is on plantings, we can assume both a drop in actual planted area and yields, though the near $1.00 rally in corn prices over the past month could keep Illinois farmers seeding corn for another 7-10 days given a final planting date of June 5 and forecasts for clearing weather in the Eastern Corn Belt.

Mother Nature, who has been prominent so far this season, will also have something to say about summer growing conditions and when the first killing fall freeze will occur.

Note that Illinis only recorded 4.48 inches of rain in April, just 0.46 inches above average. 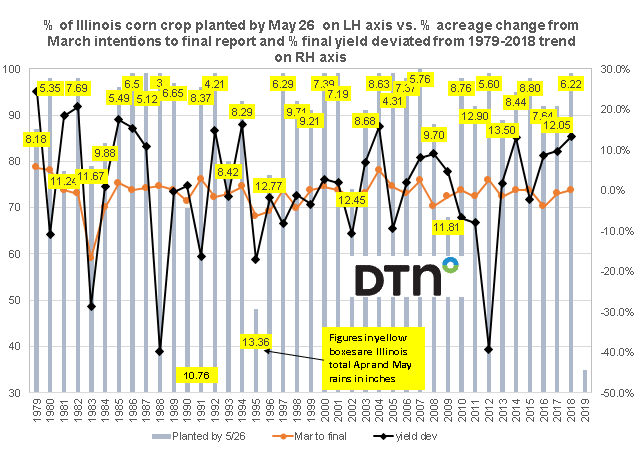 Unknown
6/4/2019 | 9:11 AM CDT
Following up on previous post: With today's rains, 25% of my intended corn acres are headed to prevent plant as final planting date is tomorrow. I am not planting beans on beans. No nitrogen applied to that 25%, not cash rented, no market incentive at $4.47 futures.
Unknown
6/4/2019 | 6:09 AM CDT
a $1.00 rally does not cover the reduction in yield and sure increase in drying costs, not to mention possible discounts. Dec corn needs to be at or above $4.75 to offset these and break even. Above $5 could provide some profit, as long as the government does not take that away in loss trade.