It appears that U.S. corn seedings the first two weeks of May will be a slow affair with Midwest weather calling for above average precipitation and below average temperatures, which has been a feature all spring.

The market, which so far has been rather blasé about this situation, seems to be changing as the trade contemplates the possibility of late plantings on yields and the impact on the balance sheet from less acreage being seeded.

As we have noted in the past, a delayed start to corn plantings can result in corn planted later in the year subjecting the plants to hotter temperatures during the critical pollination phase while also causing the crop to mature later in the season and perhaps resulting in damage from an early or even normal fall freeze.

Should seedings be seriously delayed, there is always the probability that some intended corn acreage will not get planted with perhaps another crop seeded to that ground.

Keep in mind that the actual planting dates are secondary to weather conditions during the growing season in terms of temperatures and precipitation and when the first fall freeze arrives.

This graphic shows the deviations from the 20-year trend for Illinois corn yields on the right hand axis vs. the percentage of the crop that was planted on April 30 and May 15 plotted on the left hand axis with the trends for both dates also recorded.

One of the slowest pace of seedings actually occurred in 2009 when a mere 5% of the crop was in the ground by April 30 and two weeks later the pace had hardly picked up with 17% seeded by May 15, yet state yields that year were just 2 bushels per acre (bpa) below the 2004 record and 3.6% above trend.

A similar situation was seen in 2013 with 3% of the Illinois corn crop planted by April 30 and 41% in the ground by May 15 yet yields that season still attained trend.

In fact, some of the fastest seeding paces occurred in years when yields come in well below trend and this appears to be linked to dry soil conditions in April and May that allowed for a rapid rate of seedings, yet the dry soils continued into the summer resulting in well below trend yields as seen in 2005, 2010 and of course 2012. 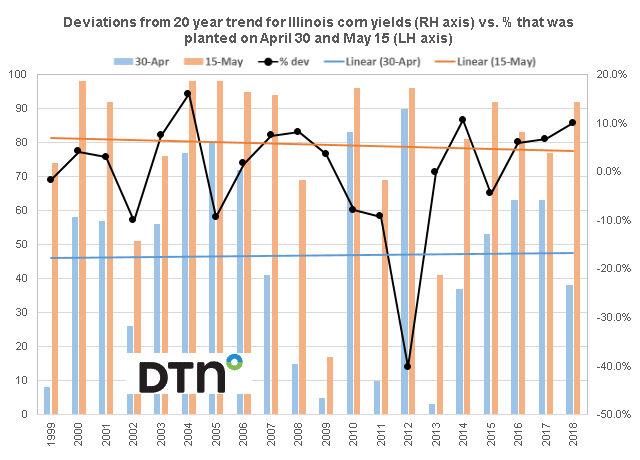