USDA will release its quarterly grain stocks report as of March 1 the last day of the month and here is yet another reason why the grain and oilseeds complex may be hard pressed to stage any rally.

While there is some well-justified concern about the impact of spring flooding on the timeliness of plantings, the ample soil moisture reserves along with almost burdensome stocks suggest plenty of tolerance for yield adversity for the major crops this coming season.

The attached graphic also plots the percent of these March 1 stocks stored on farm and for all three markets, the trend is distinctly lower, especially for wheat.

We do find it interesting that since 2013 however, the percent of corn stored on farm has actually increased from 49% to 56% as strong revenues from the 2008 to 2013 period allowed farmers to construct additional grain bins, which ostensibly would give them more flexibility in their marketing options. 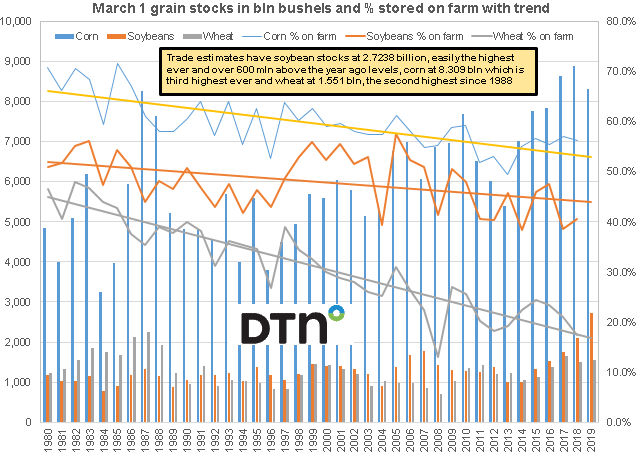