There were some bullish figures for corn when the USDA released a slew of reports on the 8th of this month, but not enough to propel prices out of their rather narrow trading range that values have been in since September.

Of note was a lower than expected December 1 quarterly stock figure and smaller than anticipated final 2018 production number linked to a small reduction in harvested acreage and a final 2018 yield of 176.4 bushels per acre (bpa).

Note that the last 2018 yield estimate given in November was 178.9 bpa so this 2.5 bpa drop is the largest ever between the November and January USDA crop production reports.

As part of its briefing, USDA usually provides a graphic showing the 10 state corn objective yield plotting the ears per acre vs. the implied ear weight but did not do so for the February report.

No problem as we updated our data and our chart on this, which is presented here.

As we have noted in prior pieces, corn yields have improved by about 2 bpa per year for the past 30 years based on technological advancements linked to enhanced seed genetics, more accurate plantings with regard to seed dispersal and soil depths, and better machinery among other factors.

One constant has been the upward trend in plants per acre, whereas 15 years ago the average plant population per acre for the 10 state objective model was around 26,200 plants per acre.

What really changes year to year is the average ear weight, which is a direct function of weather during the growing season, specifically temperature and precipitation.

A good year with ample moisture and cooler than normal temperatures generally produces large ears such as seen in 2004, 2009 and 2014, while stressful conditions including heat and drought results in lighter weight ears with 2012 a perfect example.

This year's implied ten-state objective ear weight was 0.3497 pounds per ear, the third highest ever, but below the past two years and this may be attributable to high nighttime temperatures seen this past summer.

We calculate the ten-state implied yield at 183.5 bpa which is an all-time high but back in August we had calculated that figure to be 189.5, so falling yields, not only in the ten objective states but other states, resulted in a national corn yield actually below the year ago record of 176.6 bpa. 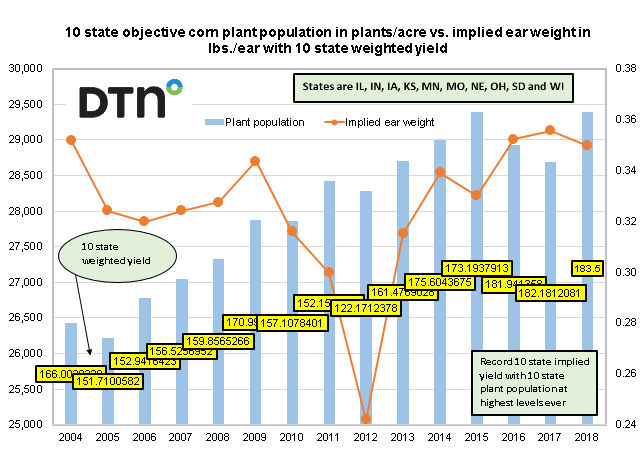