The USDA will release a slew of reports this Friday and one of the more awaited figures will be the updated soybean production estimates out of South America.

Since the December 2018 WASDE report was issued, heat and dryness has impacted a large part of northern Brazil, especially in the Parana and Mato Grosso du Sol regions.

Consequently, the average trade guess for the 2018/19 Brazilian soybean crop has fallen to 116.5 million metric tons (mmt) vs. the 122.5 mmt USDA projection back then.

Note that some estimates are as low as 112.0 million tonnes with stress seen in other producing states.

Argentina has had the opposite problem with excess precipitation in some areas, but the impact is thought to be less severe with the average trade guess at 55.2 mmt vs. USDA's December 2019 projection of 55.5 mmt.

This still represents a combined 5.8 mmt decline from what was anticipated two months ago.

On the right-hand axis are the grey bars which is the percent that combined Argentine and Brazilian soybean production accounts for the global output total.

That trend shows how these two countries are increasingly accounting for a larger share of world soybean production and this would imply a greater impact on the direction of futures prices.

As one would expect, a drop in combined soybean production should have a positive impact on futures prices and vice-versa, especially if the percent decline or increase is relatively large.

Note that the correlation between the two is a decent negative 58.2% suggesting other factors are at play including U.S. production prospects and more recently the ongoing trade war with China. 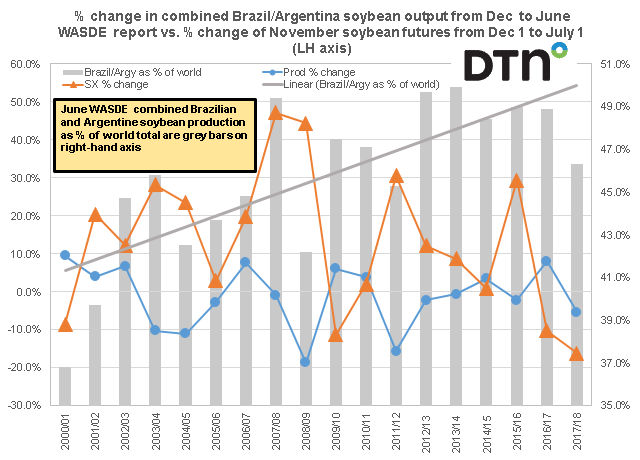