This would still be a record amount shipped overseas, topping the prior peak set a year ago at 2.438 billion and prior to that the 2.437 billion exported in the 2007/08 season.

Keep in mind that the 25 mb reduction followed up on a 75 mb increase in the October 2018 WASDE.

This chart shows U.S. export sales and shipments of corn as of third week in November in million bushels and those as a percent of the USDA November WASDE export projection.

494 mb have actually been shipped, which is the highest since 529 mb were shipped at this point in the marketing year back in the 2007/08 season and the third highest since 1990/91 as a diminished soybean export program has allowed more corn to be transported overseas.

Looking at these sales and shipment figures as a percent of the November WASDE report, sales are only 39.1% of the 2.450 bb export projection and that is the second lowest figure since the 2009/10 season and is well under the ten-year average of 46.2%.

Shipments are better at 20.2% of the November WASDE projection, which is the highest percent since the 2011/12 season and above the 17.6% ten-year average.

The relatively low sales as a percent of the November WASDE is a bit disconcerting and suggests that the USDA may be forced to lower their export projection again in subsequent WASDE reports.

For now they will most likely monitor the pace of sales over the next few months and how the South American corn crop develops before making any further revisions. 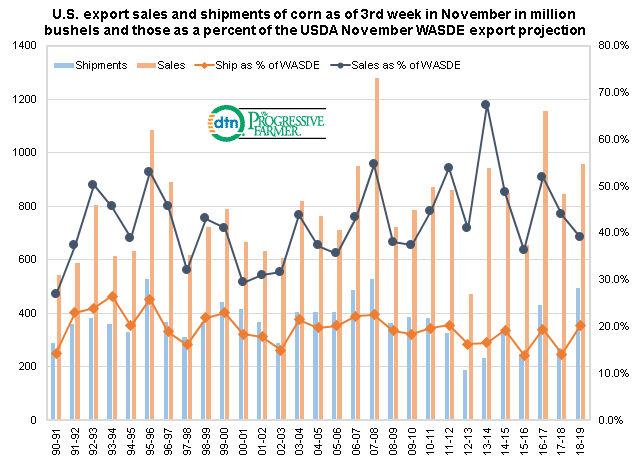