Similar to what we did with corn, this graphic shows the USDA soybean yield changes from August to September, September to October and then October to final report in bushels per acre.

A budget-imposed government shutdown in 2013 that resulted in no October 2013 USDA reports being released led to the exclusion of that year.

Just focusing on those years where the USDA's soybean yield increased from the August to the September report and then increased again in the October report, there are 12 years since 1980 that this has happened including this season.

History does suggest that further yield increases are in the cards but this may not be the case this season as the trade is worried about a large part of the nation's soybean crop, especially in the Midwest and Southeast, that may have been damaged from heavy rains due to ongoing precipitation and recent hurricanes down south.

Reports indicate that sprouting, splitting and mold issues are rather commonplace so in addition to quality deterioration there may also be quantity losses. 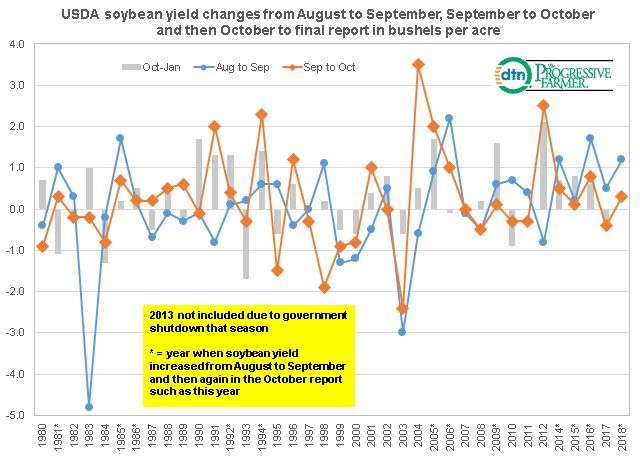