Perhaps the only bullish element of Thursday's USDA WASDE and October crop production reports was a surprise decline in the 2018 corn yield estimate of 0.6 bushels per acre (bpa) to 180.7 bpa from the September projection of 181.3 and trade expectations that a 0.5 bpa increase would be seen to 181.8.

A look at the USDA crop production briefing notes improvement in the Eastern Corn Belt with IN, OH and KY seeing record yields but IA and IL, even though still having 2018 yields at all-time highs, are 2 bpa lower than projected the prior month.

It appears that ear weights are heavier than last month though the ear population was lowered though both are record as is the national yield which is still significantly above the prior peak of 176.6 bpa seen in 2017.

The question is where do we go from here and the positive corn market action seen last week is perhaps not so much linked to the September to October yield drop but rather expectations that further yield declines will be seen in subsequent crop reports.

Along these lines, this graphic shows the USDA corn yield changes from August to September, September to October and then October to final report in bushels per acre.

1983 is not included as its 14.8 bpa drop from the August to the September report is a huge outlier.

A budget-imposed government shutdown in 2013 that resulted in no October 2013 USDA reports being released also led to the exclusion of that year.

Just focusing on those years where the USDA's corn yield increased from the August to September report and then declined in the October report the only years since that happened was in 1990, 2006, 2007 and this season (marked with asterisks).

The following year a 3.0 increase in yield from the August to September report was followed by a 1.1 drop in October and another 3.6 bpa decline into the January report.

The average Oct-final decline for these three years is then 3.3 bpa.

Just focusing on the Sep to Oct change there have been nine times since 1988 when the yield fell between these two moths and seven times additional yield declines were seen though the past two years of that in 2012 and 2016 the yield increased.

Based on this history and fears that heavy if not record rains in much of the Corn Belt over the past 30 days resulted in some quality and quantity losses for corn it seems likely that further downward yield revisions will be seen. 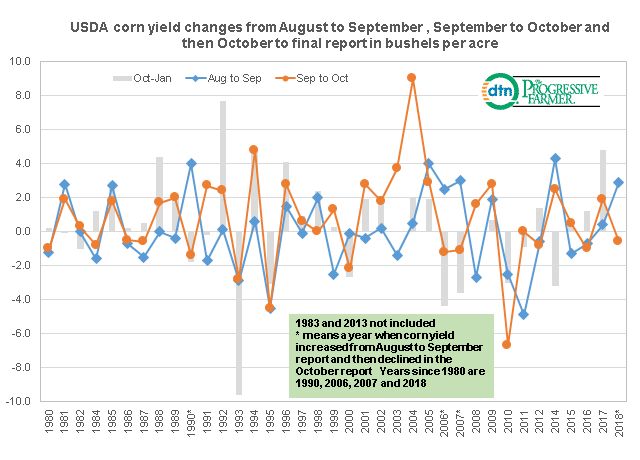