A closer look at USDA's record national corn yield projection at 176.6 bushels per acre (bpa) (which is 1.2 bpa higher than its December estimate and 2.0 above the old record set just the prior year) shows despite rainfall well below average in a number of the top ten objective states, the 2018 implied average ear weight is the highest ever; even better than the prior peak set in 2004.

This graphic shows the ten state objective corn plant population in plants per acre vs. the implied corn ear weight in pounds per ear.

We also report the ten state weighted yield in the yellow boxes.

Note that plant populations continue to increase over time contributing to the ongoing increase in trend yields, which for corn, has averaged about two bushels per year for the past 25 years.

Corn ear weights, the other part of the equation, along with plant populations for determining yields are based more on weather conditions, particularly precipitation and temperatures.

While readings were quite reasonable and in fact below average in a number of states, precipitation was lacking in many areas, yet this did not prevent the implied 10 state ear weight from moving to a new all-time high of 0.3556 pounds per acre eclipsing the old record set back in 2004 of 0.3518 pounds per ear.

A final observation is this year's ten-state weighted yield of 182.2 bpa is a mere 0.16% above the prior record set a year ago of 181.9 bpa, yet the U.S. yield of 176.6 bpa is 1.1% above the 2016 national yield of 174.6 bpa, suggesting that states outside the traditional Midwest producing region may be more responsible for the new all-time U.S. yield more so than these ten objective states. 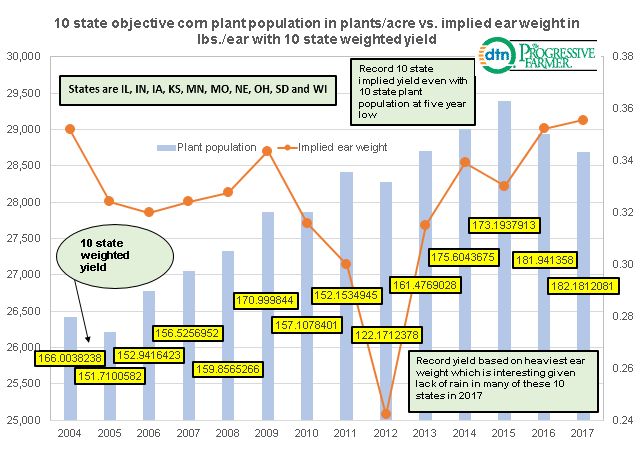