As the soybean harvest moves past its halfway point, yield reports which for the first 50% were generally coming in above expectations are now more two sided, perhaps reflecting the very dry finish to the growing season, especially in the Eastern Corn Belt. This seems to confirm the USDA’s decision to lower the national soybean yield by 0.4 bushels per acre (bpa) to 49.5 bpa in the October crop production report. The fact that the late season soybean weekly condition reports have not improved like those in corn along with historical precedent for the USDA to post a lower yield in the January crop report vs. its October estimate suggests to the trade that the final 2017 yield will come in below their October projection.

We do note however that since 1965 there has been nine of the 21 times that the USDA first increased its soybean yield from the first crop report of the year in August to the September report and then reversed course and subsequently lowered the U.S. soybean yield in its October report and these years are denoted by an asterisk. Of these nine years, six times the USDA then lowered its yield from the October to the January report though by a mere 0.1 bushels per acre.

Based on these results, soybean yield reports that are now coming in below expectations and no late season improvement in soybean conditions amidst a very dry September it is expected that the USDA will lower its 2017 soybean yield estimate again though this is against a backdrop of U.S. soybean stocks and those supplies as a percent of consumption at their highest levels since the 2006/07 season. 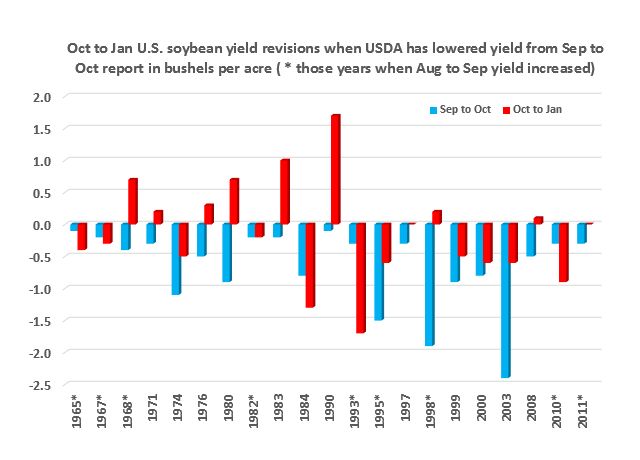