The corn market has just about fallen off the cliff ever since the USDA's August crop production report was released for even with a smaller 2017 domestic crop, production and stocks will still be more than ample, both here and abroad.

Similar to what we did with soybeans in a recent post, this graphic shows the new crop U.S. corn sales in million bushels as of the third week in August, just before the new crop season starts.

The latest export sales report showed U.S. new crop corn sales at 242.6 million bushels and this is the lowest level of exports as of the third week of August since the 2006-07 season.

With the latest WASDE export projection at 1.850 billion bushels the current sales pace is a mere 13.1% of new crop sales, the lowest figure in this regard also since the 2006/07 marketing year when they were 9.7 %.

Other than the 30.0% level seen in the 2013/14 season, this is the lowest U.S. share of the world corn export market going back at least to 1990 and we would not be surprised to see this as the lowest percent ever.

Even more than soybeans, where we noted the new crop sales pace for this commodity is very low also compared to recent seasons, the emergence of Brazil, Argentina, Russia and Ukraine as major corn producers have really curtailed our overseas sales activity especially since 2010. 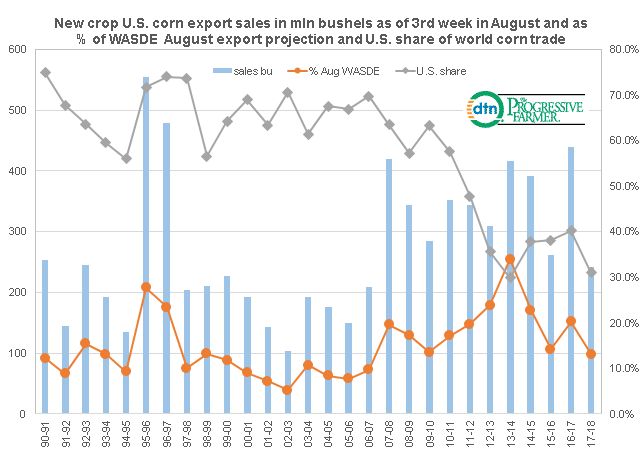