2016 will go down as one of the best U.S. corn yielding years but soybeans fared even better and in fact this past growing season appears to be the best ever.

For now, the 12th time in the 13 occasions since 1970 when the USDA hiked the national soybean yield in both the September and October crop production reports, another yield increase was seen in the November report.

The yield, already projected at a record was boosted a further 1.1 bushels per acre (bpa) to 52.5 bpa resulting in a 92-million bushel increase in output which is also an all-time high.

We have updated the chart that shows the USDA soybean yield estimates for the top producing states and the U.S. in bushels per acre, that yield as a percent of the 1989-2015 trend and where that 2016 yield ranks for each state in the 1989-2015 range.

For soybeans, the November yield is a whopping 15.3% above trend as depicted in the graphic and going back at least to 1960 this is the highest yield ever in terms of bushels per acre and the magnitude above trend topping 1994's 14.4% above trend figure.

It may be a while before we see conditions quite like the past few months were soybean plantings proceeded at a very quick pace, summer weather featured reasonable temperatures and ample rains in most areas and a fall where even the northern Midwest states have yet to experience a first freeze allowing all soybeans to reach full maturity. 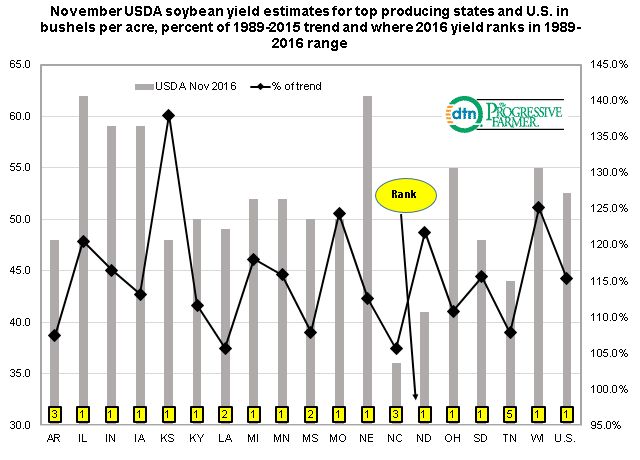