Soybean oil has been the stellar performer of the CME agricultural markets over the past few months, with last week’s high of 36.23 (cents per pound) the loftiest level since July 2014. Lower palm oil production out of Malaysia and Indonesia, the resurgence in crude oil futures enhancing the profitability of bio-diesel production, and long soybean oil/soybean meal spreading have been some of the reasons cited for this upturn in values.

Looking at the global world vegetable oil situation, palm oil is the one that has the highest production accounting for about 35% of the 186 million metric tons of vegetable oil produced in the 2016-2017 season. Next is soybean oil at 29%, rapeseed or canola oil at 14%, and sunflower oil at 9%. The other five vegetable oils that are tracked by the USDA include coconut oil, olive oil, palm kernel oil, cottonseed oil, and peanut oil; but in the aggregate they only make up 13% of the total combined.

Despite record vegetable oil production this year, and essentially over the past three years, consumption has been just as strong. As a consequence world vegetable oil stocks, calculated at 18.0 million metric tons, have been drawn down for four consecutive years and are now at the lowest levels since the 2011-2012 season. 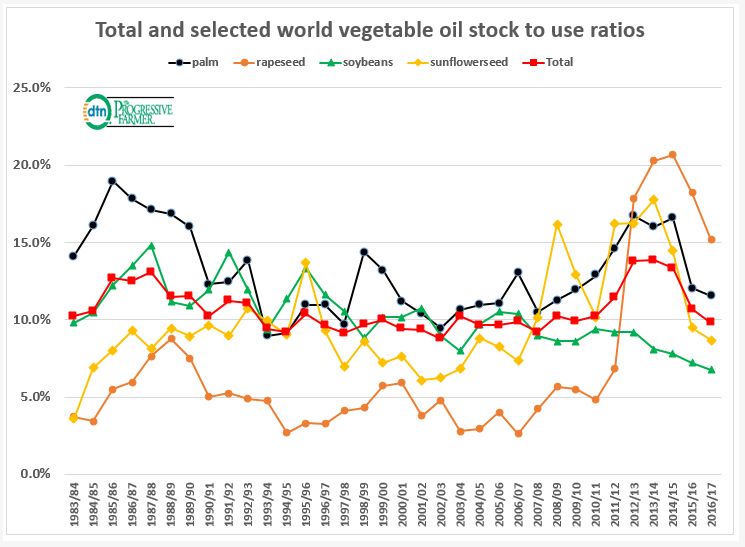