Tuesday's report from the Ag Transport Coalition, an industry group whose data covers 90% of the grain originating in Western Canada, shows week 18 demand for hopper cars totaling 10,742 cars, 1,381 cars higher than the same week last year. The year-to-date demand is reported at 161,260 cars which is just 1,422 cars less than reported in the same 18-week period in 2015.

Weekly performance based on cars spotted saw CN achieve its best performance in four weeks, with 94% of the cars in demand spotted in the country for loading, according to the Ag Transport Coalition's data. CN's Update on Western Canadian Grain for week 18 points to 6,020 cars waybilled for shipping during the week, which will include cars spotted from prior weeks and difficult to compare against industry data.

CP's performance, on the other hand, slipped to the lowest level seen so far this crop year, supplying 67% of cars in demand for week 18, as seen on the attached chart. When one compares this industry perspective to CP Rail's Grain Performance scorecard for week 18, as found on the company's website, we see 506,400 metric tons reported to move during the week, although no indication of which week those cars were requested. This points to a significantly higher volume than reported by industry, although will include volumes spotted from previous weeks. CP points to the weather-related harvest delays this fall, low crop quality and reduced supply chain efficiencies and tight space at some West Coast terminals.

Movement is set to deteriorate further as we move into later weeks. Week 19 and 20 comments from the two railroads show the many impacts from the frigid prairie temperatures and even delays due to snow on the West Coast. CN's week 19 notes point to their maximum sustainable supply chain capacity falling from 5,500 cars to 4,000 cars weekly, while CP's weekly comments shows a 1.4% reduction in cars moved in week 19 and a further 8% in week 20.

This week's poll asks what percentage of your 2016 production has been priced. You can respond to this poll which is found at the lower-right of your DTN Home Page. We thank you for your input! 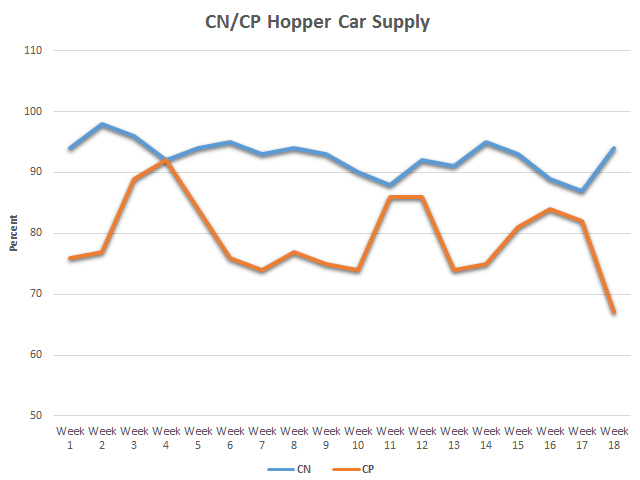