Just in time for corn pollination, periods of showers and thunderstorms moved across the Midwest during the weekend of July 11-12. A swath from approximately central Minnesota southeast to the lower Ohio Valley took in estimated amounts of 0.5 to 1.5 inches, with some locally heavier amounts. Severe storm features also occurred, with damage from strong winds and hail.

But in a large-scale crop sense, the impact of thunderstorms was favorable. Rainfall certainly is useful for soil moisture. In addition, an easing of temperatures from stressfully hot levels in the first full week of July is also noteworthy. Early-week temperature levels in the mid-July week were noted in the upper 70s to mid-80s Fahrenheit. That level is more than 5 degrees F and close to 10 degrees F lower than the daytime temperatures during the past week. Such a change offers much improved conditions for pollinating corn; timely, as many corn acres had tasseling and silking get underway during the past week.

Upper air configuration is playing the lead role in this rainfall development. Instead of a hot core of upper level high pressure making its way toward the Mississippi Valley, the upper air center has moved farther west and allowed better chances of thunderstorms to form in the eastern Plains and the Midwest. Forecast charts on July 13 point to that upper air center maintaining its location in the southwestern U.S., suggesting a lower probability of threatening hot and dry conditions to spread over most of the Midwest.

Meanwhile, much of the southwestern Plains continue under the influence of extreme heat and dryness. Record high temperatures of 100-113 F were featured in the forecast for the entire Texas Panhandle on July 13. In areas with the heat and dryness, corn pollination efficiency can be notably lowered. Drought can slow the growth of corn silks as they lengthen under the husks. And second, the corn silk can dry and inhibit pollination. That means smaller ears and fewer kernels. In a broad sense, however, the general character of the interior U.S. pattern is indicating a favorable impact both for corn pollination and soybean blooming. 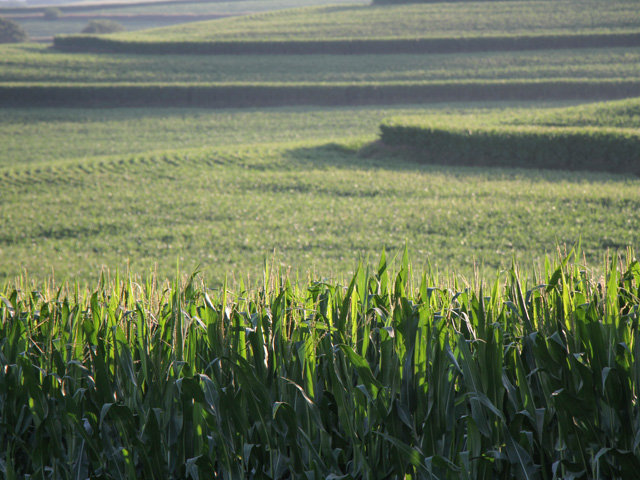