It sounds odd this year, 2019, to put the words "Midwest" and "Dryness" in the same phrase. Nevertheless, that's the situation heading into the month of August. From Iowa east to Ohio, and Michigan south to the Ohio River, the past 30 days have brought widespread rainfall of 50% or more below average. In the Mississippi Valley, that rainfall deficit is as much as 90% below average. For the month of July, Springfield, Illinois, precipitation amounted to just .52 inches. That's 3.42 inches below average -- only 13% of the average amount.

Field and crop conditions are showing the effects of this lack of midsummer precipitation. In west-central Illinois' Schuyler County, Adam Bauer noted that a field which two years ago, in 2017, produced 260 bushels of corn per acre, is likely this year to produce no more than half that amount. Planting was extensively delayed by heavy rain during the spring. And now, the recently dry July has further hindered progress and development. "Compaction and dryness is coming through right now," he told me in an exchange on Twitter. "(The) Same field 2 years ago was over 260 (bushels per acre). This year we will be lucky to have half that with perfect conditions the rest of the season ... Generalizing [about] corn in my area, we have easily knocked 80 bu off of top end at a minimum."

Circumstances are just as concerning in east-central Illinois, where producer Ron Haase has soybeans struggling in dry ground laced with big cracks from the recently dry pattern. "The cracks in the soil continue to widen as it continues to stay dry in our area!" Haase proclaimed in describing how concerning the parched ground looks.

The upper air pattern forecast over the next ten days does not offer a change in this dry Midwest trend. The primary direction of the upper-air flow is from northwest to southeast, which limits the inflow of moisture out of the Gulf of Mexico.

"The southern branch of the jet will feature a ridge in the western Gulf of Alaska, a trough over southwest Canada and along the west coast of the U.S., a ridge over the interior western U.S., a trough over southeast Canada extending southward into the eastern U.S, and a ridge in the western Atlantic Ocean," wrote DTN Senior Ag Meteorologist Mike Palmerino in a forecast discussion Friday afternoon. "This will be a limited rainfall pattern for the Midwest between the ridge to the west and trough to the east. The trough in the eastern U.S. is still expected to be strong enough and far enough to the west to support near to below normal temperatures in the Midwest and Northern Plains through the outlook period." 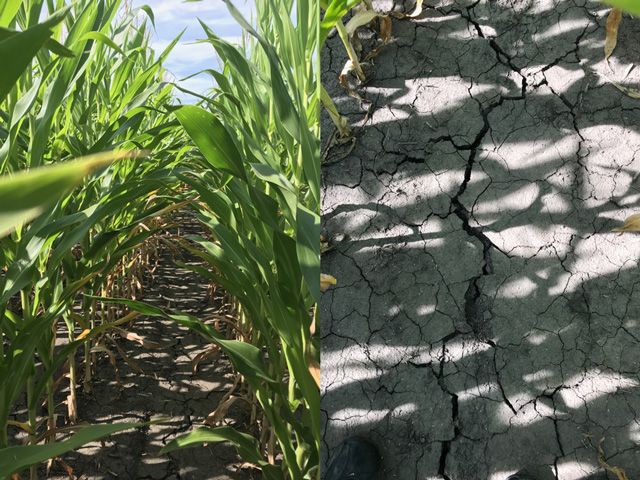