Flooding along the Red River in Manitoba is still of concern as we head into the middle of April. Spring fieldwork elsewhere in the Canadian Prairies region might be of some interest as well.

The included graphic today shows the water equivalent of the snow cover still in place from eastern North Dakota and northern Minnesota to Manitoba and Ontario. Snow water equivalent looks to be about 2-4 inches east of the Red River in northern Minnesota, but somewhat less to the west of the river. The current outlook suggests that the river will crest in Fargo, North Dakota within the next week and probably about two weeks after that in Winnipeg, Manitoba. The flood risk has diminished some from what we were looking at a couple weeks ago. Flooding is still expected, but so long as the weather continues to cooperate, this flooding will not be as severe as earlier forecasts.

The weather patterns that I am looking at for the next two weeks suggests that precipitation in the eastern Dakotas, northwest Minnesota and Manitoba will average near to below normal during the next five days and then mostly below normal after that. This means that the expected weather will not be adding to the problem to a significant degree, especially after the next five days. Temperatures during the next five to six days or so are expected to increase significantly. This could hasten the snowmelt in the indicated areas, but without added rain to the situation this should not be of a major concern. There are indications beyond the six-day time frame that it will turn colder again, although this is not certain. If it does turn colder and the drier weather pattern also holds, then the snowmelt should once again slow.

While this is not the best-case scenario, it is about as good as can be expected in the area at this time of the year. We expect to see flooding move north along the Red River into Manitoba this month, but floods are not expected to be as severe as we might have thought a couple of weeks ago.

Another benefit of the drier-than-normal weather pattern during April is that many areas will be free of snow and fields will dry out to allow some fieldwork later this month or early in May.

There are a few areas of exception to this, most notably in northwest, north-central and southwest areas where precipitation has averaged near to above normal during the past 90 days.

However, in many areas the prospects for favorable conditions for early spring fieldwork look good. 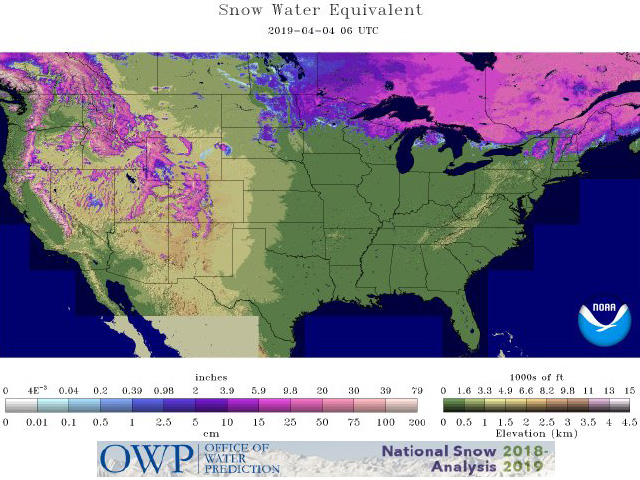