The headline in a social media post from the NOAA Weather Prediction Center said: "An amazingly wet CONUS for 2018!" (CONUS stands for contiguous U.S. -- the lower 48, so to speak.) The post went on to note how 2018 was over the prior record at many locations, with some locations breaking their records by over 20 inches.

All that is true: veteran weather-tracker Daryl Obermeyer, from Nemaha county, Nebraska, noted that "Mason City, Iowa received 50.01 inches of moisture in 2018, 14.81 inches above normal. Several locations in northern Iowa recorded the wettest year on record." Another example, from Jerry Oster, news director at WNAX radio in Yankton, South Dakota, has this detail: "We (Yankton) got 41.86 inches of precip in 2018. Normal is just under 24 inches." There are many more, but you get the idea. In many areas east of the Rockies, the year 2018 was a record year by a long way for precipitation.

But, as used to be said on ESPN's college football show, "Not so fast, my friend." There's another side to the very-wet-year coin, and that points to the entire western U.S. Basically, if you were west of the Continental Divide, 2018 was dry -- bereft of moisture. It didn't get talked about much in the commodity trade news of the day, but this pattern was in effect for much of the year. East of the Divide, generally speaking, turned out to be wet -- especially from August on. West of the Divide, it was a dry year throughout.

Another striking feature of the have and have-not year 2018 -- again, looking at the entire year -- is how the precipitation trends matched up with the descriptions and predictions made in the Fourth National Climate Assessment issued in late November. Here is an excerpt from that report on precipitation:

"Annual average precipitation has increased by 4% since 1901 across the entire United States, with strong regional differences: increases over the Northeast, Midwest, and Great Plains and decreases over parts of the Southwest and Southeast, consistent with the human-induced expansion of the tropics. In the future, the greatest precipitation changes are projected to occur in winter and spring, with similar geographic patterns to observed changes: increases across the Northern Great Plains, the Midwest, and the Northeast and decreases in the Southwest."

This is not the first such event that we have seen with these out-of-bounds characteristics, either: 2013 had similar features; so did 2015. And, one more general atmospheric characteristic comes to mind in looking at what happened precipitation-wise in 2018: the idea of stalled-out weather patterns as a result of general warming, especially in the northern latitudes, and the impact on jet stream speed and configuration, appears to be elbowing its way into this conversation as well.

In summary, things keep happening that reinforce the findings and predictions of climate scientists when it comes to climate change impact. The precipitation pattern in 2018 adds to that array. 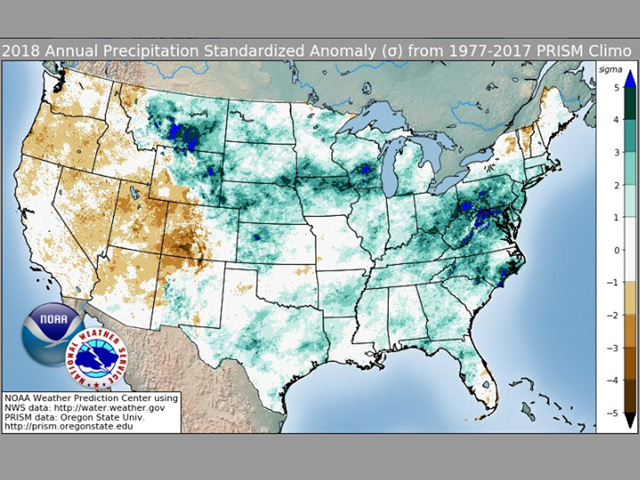