High pressure aloft has continued to limit rainfall in southern Brazil accompanied by some hot weather. In a normal year, this would be rather early in the growing season and have limited impact on the crop.

However, this growing season featured an early start to the rainy season. Producers took full advantage of this by planting early and planting shorter-season varieties in Parana to take advantage of an early harvest.

This has not worked out well, as the early-planted crop has experienced hot and dry weather right in the middle of pod fill. This is leading to some significant crop losses in the major growing areas of western Parana.

The situation has not been as concerning in Rio Grande do Sul because the crop was planted later and they have not been as dry as Parana.

The weather outlook calls for some moderate-to-heavy showers and thunderstorms from late this week through early next week accompanied by cooler conditions. This will ease stress to pod-filling soybeans.

A period of hot and dry weather late in December likely had some impact on pod-filling soybeans in central Brazil. However, the weather pattern has featured episodes of scattered showers and thunderstorms and lower temperature in recent days easing crop stress. The weather has turned hot and dry in northeast Brazil (Bahia) depleting soil moisture and increasing crop stress.

A pattern of moderate temperatures along with episodes of scattered showers and thunderstorms has become established over central Argentina. This is favorable for developing corn and soybeans.

Wet weather in the Delta and southeast United States, extending at times into the southern and eastern Midwest, has led to saturated soils and episodes of flooding. With El Nino conditions continuing, we see little change in this pattern through at least mid-January.

The sea surface temperature departure in the eastern equatorial Pacific Ocean for the month of December was plus 1.5. This is down from the plus 1.8 observed during the month of November, but still within El Nino levels. 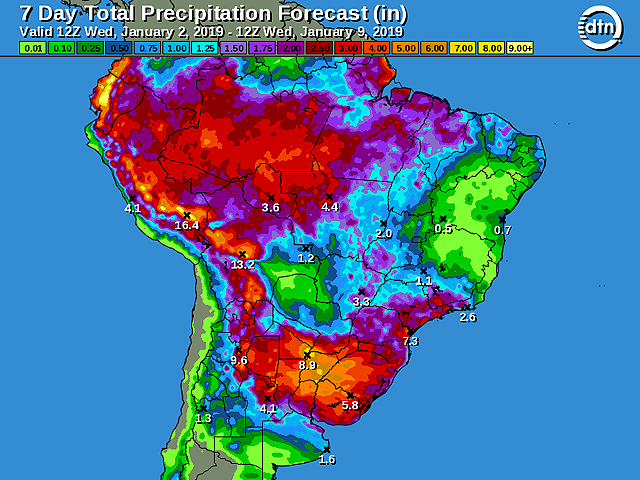