It's the time of year when Americans give thanks, eat turkey and watch football. Oh, and give to charities.

Thanksgiving's arrival means Dec. 31 is not far away. If Americans want the tax break, they have to stop procrastinating and send the check. By one estimate, 31% of annual giving occurs in December and 12% in the year's last three days. (https://neonone.com/…)

Knowing this, every November and December the "development" departments of non-profit organizations flood potential donors' mailboxes with begging letters. My wife and I are getting five, six, sometimes seven or eight a day.

We get come-ons from groups battling climate change and groups protecting biodiversity.

Our mail is full of free calendars and notepads and return address labels. And with promises of free umbrellas and tote bags. All we have to do is give.

Some of this mail comes from charities we have previously supported. Some comes from organizations we've never heard of. Direct mail, which is what the marketers call it, has a response rate between 1% and 5%, high enough and dependable enough that charities eagerly buy mailing lists from other charities. We don't know who some of these groups are, but they know who we are.

Junk mail is what the recipients call it, and I admit my wife and I discard some of what we get unopened. And yet I write today not to deplore junk mail but to praise the organizations that send it.

My perverse contention is that they're something to be thankful for. Not only do many of them do good work. They're a manifestation of one of our country's continuing strengths: voluntarism. Americans don't wait for the government to do everything. We roll up our sleeves and do some of it ourselves.

Alexis de Tocqueville, a French aristocrat who visited the U.S. in 1831, pointed this out in his famous book Democracy in America: "I have frequently admired the endless skill with which the inhabitants of the United States manage to set a common aim to the efforts of a great number of men and to persuade them to pursue it voluntarily."

Perhaps our fondness for voluntary do-goodism stems from our national suspicion of concentrated power. Our founding fathers designed a government with limited powers and lots of checks and balances.

As a corollary to limited government, citizens who wanted something done were free to organize themselves to achieve it. And organize we have.

Our government is much larger and more powerful than the founders dreamed of -- but it's far from all powerful. Some Americans would like a smaller government, some a larger one. But it's hard to imagine any American wanting to live under a government with anywhere near the power of China's.

And even as our government has grown, so have countervailing private sources of power: companies, unions and churches, to name but a few -- and, yes, all those nonprofit organizations that send us junk mail.

Congress has encouraged the nonprofits by giving them favorable tax treatment. Today, under section 501(c)(3) of the Internal Revenue Code, nonprofits that meet certain conditions are tax exempt and their donors get a tax deduction. Hence the hustling to give before the tax year ends.

The profusion of philanthropic organizations in today's America has its critics. They complain that big philanthropic foundations like the ones set up by billionaires Bill Gates and Jeff Bezos are unaccountable and lack transparency, among other alleged failings.

Any power, public or private, can be abused and all power needs to be scrutinized. But don't forget that the big foundations fund an enormous body of good deeds by smaller nonprofits, scholars and others. The number and diversity of nonprofits is a further protection against any one of them becoming too powerful.

On balance, it is good to live in a country where power is dispersed. If junk mail is how charities support themselves, I can accept that even as I throw some of the mail in the trash. I only donate to a few of them, but this Thanksgiving I'm thankful that there are so many nonprofits working for social betterment. 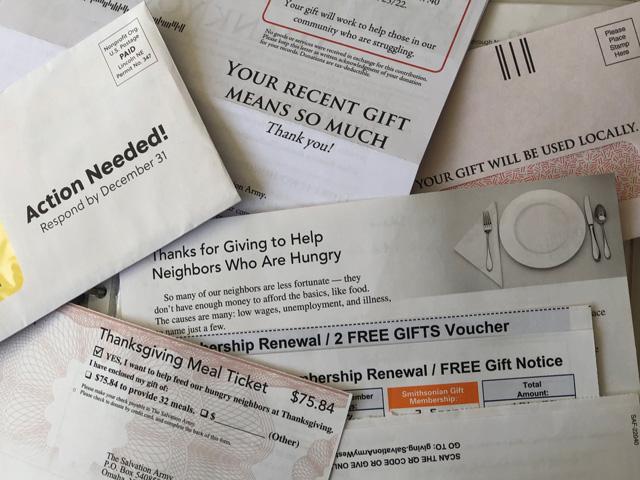