ITHACA, Neb. (DTN) -- Many farmers face some sort of financial distress due to a mixture of tight profit margins and uncooperative weather. Learning the signs of stress and talking with farmers who may not be coping with stress effectively are important skills to possess, according to experts.

In a presentation titled "Communicating With Farmers Under Stress" last week, University of Nebraska-Lincoln (UNL) Extension educators tried to bring awareness to the stressful conditions farmers are under, as well as teach techniques for dealing with people under stress. Attendees also learned where to go for additional help for those struggling with mental health.

UNL Extension Educator Susan Harris-Broomfield, whose work is on rural health, wellness and safety out of Minden, Nebraska, said stress affects the human body and chronic stress has a long-term negative impact. Stress affects all organs, shortens lifespans and generally plays havoc in the body.

Harris-Broomfield said signs of stress can come in many forms: It can be physical, emotional, behavioral or cognitive. Everyone reacts to stress differently, she added.

Common signs of chronic, prolonged stress in farmers could be a change in routine, the care of livestock declines, increase in illnesses, increase in farm accidents and the appearance of the farmstead declines. Things that used to matter to them don't seem to matter anymore, she said.

There are steps to handling stress, Harris-Broomfield said. These include deep-breathing; positive self-talk to build up your confidence; meditating; correct levels of exercise, food and sleep; connecting with people in a social setting; and even speaking with a mental health professional.

Harris-Broomfield told DTN the UNL presentation utilizes information from a program originally put together by Michigan State University. With the increasing amount of stress in agriculture, especially after the widespread March flooding hit Nebraska, UNL Extension decided to have a series of workshops across the state, she said.

At the meetings, typically representatives from local banks, insurance companies, government agencies, extension and other ag businesses attended to learn more about stress, she said.

"We have had pretty positive feedback," Harris-Broomfield said. "We have evaluation forms and we have never had one come back saying no to the question about learning something they will be able to use."

When approaching a person under stress, there are four main steps to follow, according to UNL Extension Educator Jean Ann Fischer, based in Lincoln. These are preparing for a discussion, active listening, what to do or don't do, and preparing an action plan.

Fischer said thinking and planning ahead can help in these often heavy discussions. You should have the proper mindset when having these discussions such as feeling empathy -- not sympathy -- towards the person and that person's situation, she said.

"The goal should be preserve the relationship, create safety in listening and then develop a shared purpose in resolving," Fischer said.

Fischer said preparing an action plan would be if the person is suicidal. The correct question to ask is "Are you having thoughts of suicide?" in a calm, low voice free of judgement.

"Asking directly doesn't increase risk of suicide and may provide the person with relief that someone sees their struggles," she said.

Fischer said warning signs of suicide are many. These could include writing or talking about suicide, feeling hopeless, giving away prized processions, making a plan, saying goodbyes or apologizing, isolation from others, loss of interest and mood changes.

If the person says yes to the question, do not leave that person alone. Call for help and/or take the person to a hospital or healthcare provider, she said.

In Nebraska, Bryan Medical Center helped develop the state's first Local Outreach to Suicide Survivor's (LOSS) team in Lincoln in 2009. This volunteer group provides support to individuals as soon as possible after the death of a loved one to suicide.

Today there are eight other LOSS Teams in the state of Nebraska with several more teams being developed.

For more information regarding LOSS teams and how to access them, visit http://www.nelossteam.nebraska.edu/…

There are many resources available for those considering suicide.

The National Suicide Prevention Lifeline is 1-800-273-TALK (8255) and the website is https://suicidepreventionlifeline.org/….

Editor's note: Look for DTN's continuing coverage in the next few months on surviving the stress facing farmers. We also welcome your feedback at talk@dtn.com

To read more DTN coverage on farm stress, go to the following links: 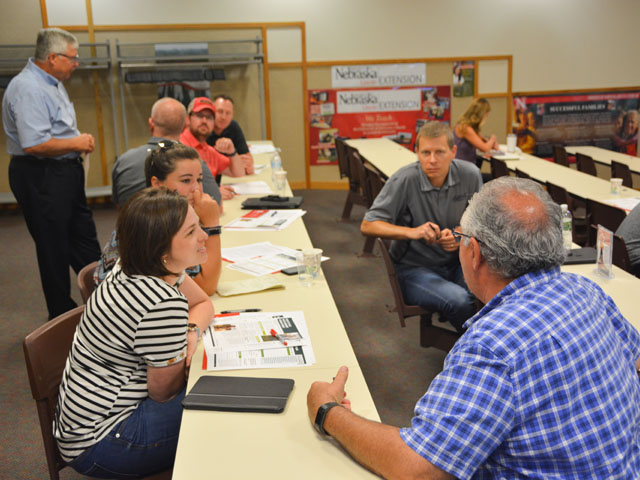