OMAHA (DTN) -- As people clean up after floodwater recedes in some Midwest locations, health care professionals remind people they still need to protect themselves even though the water is gone. This includes both physical and mental health care during the long road of cleanup and rebuilding in many rural areas.

In areas where the floods came through and water receded, people are working hard to clean up homes and buildings. Workers need to use personal protective equipment (PPE), according to Chad Roy, professor of Microbiology and Immunology at the Tulane School of Medicine in New Orleans. He spoke at a webinar put on by the AgriSafe Network last week.

PPE can be protective clothing, helmets, goggles or other garments or equipment designed to protect the wearer's body from injury or infection. Roy stressed using this equipment at all times while helping to clean up from a flood is important.

"Contaminants from flood water is a witch's brew," Roy said.

Floodwaters in rural areas can contain many different contaminants from various sources. This includes ag chemicals, fuels, animal and human waste, and even decomposing livestock.

E. coli, for instance, can be liberated when animals die and can be in the floodwaters.

Repeated exposure without protective equipment could lead to issues with infections, Roy said.

Roy said one major problem after the floodwaters are gone is microbial growth on surfaces in buildings. This can lead to various human issues including general discomfort, irritated mucous membranes and irritation to the nervous system.

The good news is only a small percentage of microbial growth can lead to human disease, but it is best to still protect yourself while cleaning up after a flood, he said.

Aaron Yoder, associate professor of Environmental, Agricultural and Occupational Health for the University of Nebraska Medical Center (UNMC) and University of Nebraska-Lincoln (UNL) Extension, said other precautious should be taken when cleaning up after floods. Kids, pets and people with weakened immune systems should not help since they are more prone to infections.

Yoder said there are many hazards on the farm after a flood.

Utilities need to be disconnected and inspected afterwards. Workers need to be aware of debris. Slips and falls can occur as the debris is removed, he said.

Structures need to be examined to see if the rushing waters damaged foundations. Any damage should be documented for insurance purposes, he said.

Yoder said those working around livestock need to be cautious when handling these animals because they have just gone through a traumatic event, and they may still be panicking. Get the scene stabilized, feed the animals and keep everyone safe.

"Many times in flood cleanup, farm machinery is being used," Yoder said. "People need to remember the basics, like tractor rollovers, runovers and being caught in equipment."

Yoder said people also need to inspect the farm equipment before using it to make sure it isn't damaged. Operators also need to watch for unstable ground caused by the running water.

Grain structures can be damaged by swelling grain inside being exposed to water. These structures will need to be inspected, any repairs made and then disinfected before more grain can be stored, he said.

Damaged grain should be destroyed and not fed to livestock, Yoder said. While damaged grain at the bottom of bin will have to be destroyed, grain above it could still saved. Different methods, like using grain vacs, can be used to remove the good grain, he said.

UNL Extension Environmental Infrastructure Engineer Bruce Dvork spoke in the webinar about well water safety after flooding. Wells that saw floodwater within 100 feet should be inspected and water tested, he said.

Newer wells are fitted with a sanitary seal to prevent contaminants from getting into the water supply. If the seal or anything else on the well head is damaged in a flood, a professional well person should be consulted to inspect the well, he said.

Dvork said the most vulnerable wells are ones which are older wells, ones with well pits, those without a grout seal, or wells submerged with floodwaters.

"If you think your well has been exposed to floodwaters, don't use the water until the water is tested and the lab work is back," Dvork said.

Options for a water source if the well water has been contaminated is to use bottled water or boil the water. The water needs to be brought to a vigorous boil for one minute, he said.

If the well water is found to be contaminated, the process of shock chlorination can be used to remove the contaminated components. Again, consult a licensed well professional, he advised.

Those who survived a flood also need to address their mental health, as well as physical health.

Associate Professor Christina Chasek, from the Department of Counseling and School Psychology at the University of Nebraska-Kearney (UNK), said people often have feelings of grief and loss after a flood. Common reactions can include disbelief, shock, fear, no control over events and a whole list of other reactions, she said.

"Natural disasters pile onto to everything else in agriculture," Chasek said. "This causes a lot of stress and people don't take care of themselves."

Chasek said people tend to have different stages of handling the effects of a disaster.

The first stage would be the "heroic phase" where people are getting things done in the cleanup process and this would be followed by the "honeymoon stage" where people have great support. These stages can last for a few weeks or maybe a month, she said.

The disillusioned stage would be the next phase: This is the phase of most concern if people have been in it too long. Normally, this could last as little as a few months or as long as a couple years, she said. "Full negative effects are seen in this stage and only compounds everything," she said. "This is when people don't sleep, begin to drink and have suicidal thoughts."

Chasek said the final stage would be the "reconstruction phase" -- this is when things are being rebuilt and there is hope for the person once again.

There are many things people can do to cope with flooding stress. One of the most important things to do is to ask for help if you need it, she said.

Mental health professionals stand by ready to help, Chasek said. Others in rural communities who would be willing to help would be any local clergy, she added.

Several different flood resources can be found at the AgriSafe network's website: https://www.agrisafe.org/… 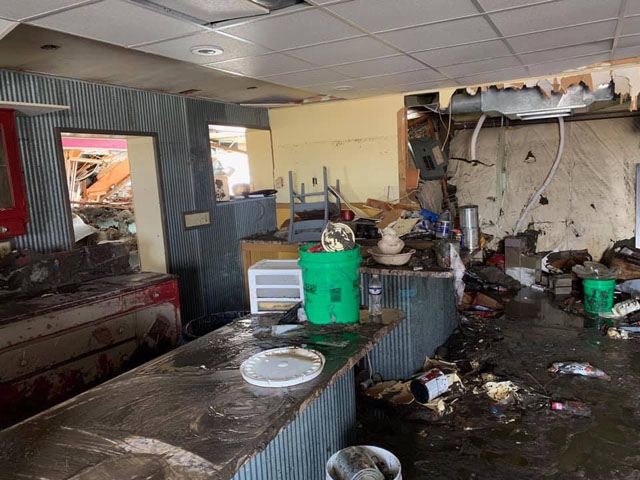