While a federal effort is underway on numerous fronts, rural areas search for their own solutions.

Cherokee Health Systems is a non-profit organization with 24 clinics in 13 counties in Tennessee. It provides primary care, behavioral health and addiction services to more than 70,000 people.

"Scarcity of resources is the No. 1 problem," she said. "We have so many counties that we are the only service provider. Something as simple as transportation is huge. Our patients cannot afford to leave the farm for nine hours a week."

To be more efficient with time, Cherokee Health Systems schedules patients with multiple doctors on single visits. Through telemedicine, middle-schoolers access care at school where internet is available, without parents having to take time off work.

Telemedicine has been used for about 20 years, but a lack of broadband access limits its usefulness in treating opioid use disorder, Khatri said.

"In D.C., jaws drop when I tell them some areas have zero internet," she said.

Jamey Lister, assistant professor in the school of social work at Wayne State University in Michigan, said rural Americans see a "great shortage" of evidence-based treatments that provide addiction medications along with counseling.

In Michigan, Lister said only two of 57 rural counties have an opioid-specialty clinic.

"Rural counties of relatively low-income levels are the counties hardest hit for shortages," Lister said. "As a result, many rural residents seek out informal supports -- church, family, 12-step meetings. These options provide a better chance for recovery than no action at all, but the science is much stronger for medication-assisted treatment's chances to lead to sustained recovery from opioids."

"We're never going to have enough money to treat our way out of this," she said. "Without money for preventions, we're all wasting our time."

Farming communities are particularly vulnerable to the opioid crisis, because vast open spaces can make it difficult for families to stay connected to provide needed support to people with opioid use disorder.

"We are a big farming community," Haskins said. "I think because farming is the occupation of choice, it makes it harder to afford insurance. Nobody can afford treatment on their own."

Additionally, this leaves states desperate for enough foster care for kids left behind by parents who die of overdose, Haskins said.

Dr. Andrew Kolodny, co-director of Opioid Policy Research at The Heller School for Social Policy and Management at Brandeis University, said rural America needs a sustained federal investment to build treatment centers. He added there also needs to be an emphasis on precaution in prescribing painkillers.

Kolodny said the federal government needs to invest about $60 billion a year for the next 10 years to expand treatment facilities.

"There has to be a commitment for long-term funding," he said. "If it is one-time money now, a state can't create a new program with staff and maintain it."

Kolodny advocates finding alternatives to opioid painkillers -- a position for which he takes heat from drug companies and opioid pain relief advocates.

An August 2018 study published in the journal Science found physicians changed their prescribing habits when they were notified that a patient of theirs died of opioid overdose.

Those doctors were notified by county medical examiners to prescribe safely, resulting in both a reduction in high-intensity prescribing and the amount of opioids taken by patients.

Kolodny said pain can be managed without opioids.

A study at the Northwestern University Feinberg School of Medicine in Chicago in 2015-2016, found no difference in pain reduction between using a combination of opioid painkillers and acetaminophen, and ibuprofen and acetaminophen for acute pain patients in emergency rooms.

While there has been promising results in prescribing less opioid painkillers, another big challenge for rural areas is finding medical staff in the first place.

Nationally, 65% of rural counties do not have a practicing psychiatrist, 47% lack a psychologist, and 81% lack a psychiatric nurse practitioner, according to the National Rural Health Association.

"One of the biggest challenges is mostly in MDs (medical doctors), people in psychiatry," he said. "I know in some areas it is a challenge to recruit people."

Nebraska has the third-worst need-to-capacity ratio for opioid addiction in the country at 6-to-1, behind Arkansas and South Dakota at 7-to-1, according to a 2016 University of Nebraska-Lincoln study.

At medical schools across the country, however, treatment of pain and addiction account for less than 1% of formal curriculum, the UNL study said. Just 2.2% of physicians are approved to prescribe the outpatient treatment drug buprenorphine, and 90% of approved physicians practice in urban areas.

This means about 30 million people live in counties where buprenorphine treatment is unavailable.

Though the opioid addiction crisis is a national problem, there is a need to tailor urban and rural treatment approaches differently.

For example, in rural Tennessee, young people struggle to find job opportunities. The spread of the opioid epidemic has led to more crime, and opioid painkillers are far more commonly used than they were 20 years ago.

"They start drugs, then they are less engaged," Khatri said. "I don't think job opportunity is the only thing, there is a lot of generational trauma. Lack of meaningful work -- that absolutely creates a vacuum in people's lives."

Every single demographic in rural Tennessee is affected by the crisis. Addicts range from teenagers hurt playing football to older farmers injured in accidents.

With so many generations involved and areas of the country, it's difficult to find a "one cure fits all" approach to addiction.

However, in 2018, a number of federal actions were set in motion.

Congress launched an investigation into drug manufacturers, distributors and others. The U.S. Department of Justice committed more Drug Enforcement Agency agents to investigate pharmacies and prescribers who appear to be prescribing unusual amounts of opioids.

The results of that investigation were released on Dec. 19, 2018. A House Energy and Commerce committee report concluded that both U.S. Drug Enforcement Agency and drug distributor oversight into prescription opioids flowing into West Virginia were inadequate.

On March 19, President Donald Trump announced a broad opioids initiative to address the driving forces behind the opioid crisis, reducing demand for and over-prescription of pain killers, to cut off the supply of illegal drugs, and to provide help to those addicted.

As part of a recent trade truce with China, the Chinese agreed to stave off the flow of illegal fentanyl into the U.S.

To date, USDA has approved $600 million to help expand broadband access in underserved areas. In April 2018, USDA reserved $5 million in grants for distance learning and telemedicine projects that propose innovative ways to address the epidemic in rural communities.

In September, USDA announced it was investing $10.7 million in 85 projects in 22 states through the community facilities program aimed at opioid prevention, treatment and recovery.

On Sept. 17, the full Senate passed a number of bills that would help communities build out treatment centers, expand telehealth, encourage the expansion of drug take-back programs, and allow the U.S. Drug Enforcement Agency to consider abuse and overdose deaths when setting opioid production quotas, among other things.

On Sept. 19, the U.S. Department of Health and Human Services announced more than $1 billion in grants awarded in all 50 states to help combat the opioid crisis. The grants will be administered by the Substance Abuse and Mental Health Services Administration, the Health Resources and Services Administration, and the Centers for Disease Control and Prevention.

On Oct. 3, the U.S. House of Representatives and the U.S. Senate both passed the Substance Use-Disorder Prevention that Promotes Opioid Recovery and Treatment for Patients and Communities Act. The measure includes dozens of bills aimed at various aspects of the crisis. The legislation was signed into law by the president on Oct. 24, 2018.

Sen. Charles Grassley, R-Iowa, said the legislation will help states in the Midwest fight the epidemic.

"More than 100 people in the United States die from opioid overdoses every day," he said in a statement. "Midwestern states like Iowa have seen opioid overdoses increase 70% from July 2016 to September 2017. The devastating effects of the opioid epidemic are clear and more has to be done to reduce its impact."

The legislation includes reforms to Medicare and Medicaid, and a few key public health measures. It directs the U.S. Food and Drug Administration to issue and/or update guidance on ways to bring new non-addictive treatments for pain and addiction to patients. The act makes permanent buprenorphine prescribing authority for physician assistants and nurse practitioners.

The measure permits waivered practitioners to immediately start treating 100 patients at a time with buprenorphine. Currently there is a 30-patient cap if a practitioner is board-certified in addiction medicine or addiction psychiatry, or if a practitioner provides medical-assisted treatment in a qualified practice setting.

The bills authorize grants to state and local agencies to establish and/or operate public health laboratories to detect fentanyl and other synthetic opioids.

Another provision provides resources for hospitals to develop protocols on discharging patients admitted for opioid overdose. The protocols would be to provide anti-opioid overdose drug naloxone upon discharge from a hospital, connect patients with peer-support specialists, and refer to treatment and other services.

The measure would establish a demonstration program to test alternative pain management to limit opioid use in emergency rooms.

On the telemedicine front, federal law allows the U.S. attorney general to issue a special registration to prescribe controlled substances via telemedicine in emergency situations. However, the waiver process has never been implemented through regulation. One legislative provision directs the attorney general and the secretary of health and human services to complete a final regulation within one year of the bill becoming law.

In addition, the package provides federal funding for housing choice vouchers to nonprofits that provide housing and job training for people transitioning out of substance abuse rehabilitation programs.

While the federal government assistance will be welcome in rural areas, more could be done.

"They are approving new opioids even as the epidemic is getting worse," he said. "FDA permits companies to promote use for consumers where they shouldn't use opioids, period."

The FDA announced an action plan in April 2018 to include reassessment of the risk-benefit framework for opioid use with the end goal to take into account risks in approval decisions.

"Congress is meeting with FDA to push for approval of products more quickly," Kolodny said. "We haven't seen Congress put FDA's feet to the fire to fix the mistakes of the past 20 years."

Click the link to read the FDA action plan:

Editor's Note: Next in the series: Actionable insights and what can you, your community, and others do to deal with the opioid crisis. 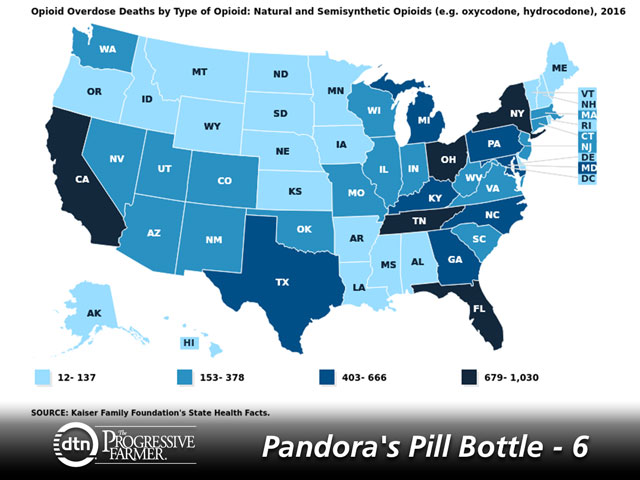