OMAHA (DTN) -- Pandora's box was an artifact from Greek mythology. In Greek poet Hesiod's "Works and Days," Pandora's box was a large jar given to Pandora that contained all of the world's evils. She unleashed it all when she opened the jar.

Only hope was left inside the jar.

Communities across the country are looking for hopeful approaches to combat what has spilled out of pill bottles: The scourge of opioid addiction that has become the modern-day Pandora's box.

Putting the problem back in the jar -- or bottle -- may be impossible.

Victims of opioid addiction often appear faceless and nameless in a national tragedy that buries families in stigma.

The victims can be any family member, friend, neighbor or co-worker, of any generation, in urban as well as rural America, lost to a crisis still on the rise nationally.

DTN is launching this special series for a closer look at the impact of opioid addiction on rural America, how it became such a big problem, and what is being done about opioids.

Ultimately, is there still hope left inside Pandora's pill bottle?

SAVED FROM BEING A STATISTIC

Columbus, Indiana, farmer Randy Hedrick could have been just another grim statistic.

Instead, he went from taking 400 milligrams of opioid painkillers a day, to deal with injuries sustained on the farm, to zero.

"My dad, as I was growing up in the '60s and '70s, he was addicted to painkillers," Hedrick said. "I fell right into the same trap. It is just off-the-wall bad right now. We've opened a Pandora's box and we can't get out."

Unfortunately, not everyone has survived. The human toll from opioid abuse has been staggering.

Between 1999 and 2016, 351,602 people in the United States died of opioid overdoses, according to a Henry J. Kaiser Family Foundation database.

Rural America is a key battlefront where the crisis is growing. At the same time, the agriculture-based economy continues to struggle and lacks the resources to support needed healthcare infrastructure improvements and growth.

Fifteen states have more than 50% of their population living in rural areas. This includes Alaska, Montana, Wyoming, North Dakota, South Dakota, Iowa, Oklahoma, Arkansas, Mississippi, Alabama, Kentucky, West Virginia, Vermont, New Hampshire and Maine, according to the U.S. Census Bureau. Those 15 states recorded 2,854 opioid overdose deaths in 2013, according to Kaiser. By 2016, there were 4,162 deaths -- a 46% increase.

Another 19 states are more rural than the national average, according to the Census. Those states -- Oregon, Idaho, New Mexico, Kansas, Nebraska, Minnesota, Missouri, Louisiana, Tennessee, Indiana, Wisconsin, Michigan, Ohio, Pennsylvania, Vermont, Virginia, North Carolina, South Carolina and Georgia -- had a total of 9,633 opioid overdose deaths in 2013. By 2016, the number spiked to 17,365.

"Certainly there is no corner of the country that's gone untouched," said Anne Hazlett, assistant to the secretary for rural development at USDA.

"Rural communities are particularly impacted. We believe strongly as we move forward that the most effective solutions are at the local level. Rural leaders have come together for generations. This is no different."

Centers for Disease Control and Prevention data highlights the growth of drug addiction in rural areas in less than two decades.

From 2000 to 2014, there was a 200% increase nationally in the rate of overdose deaths involving opioid pain relievers and heroin.

Jamey Lister, an assistant professor in social work who studies rural opioid addiction at Wayne State University in Michigan, said the scourge is hitting rural areas particularly hard because treatment can be difficult to access.

"I grew up in a rural town that was a 30- to 60-minute drive from the nearest specialty health services," he said. "There, I witnessed people struggle with behavioral health, mental health, substance use, and almost always that distance from cities kept them from accessing formal treatment."

Eighty percent of people addicted to opioids do not receive treatment, according to a 2015 study conducted by Johns Hopkins Bloomberg School of Public Health. This could be for various reasons, ranging from limited treatment options near them to avoiding treatment because of stigma or financial concerns.

Sometimes, treatment is hard to find; 92% of treatment facilities in the U.S. are located in urban areas despite higher rates of overdose deaths in rural America. Even if treatment is found, it may be limited in scope.

THE MOST COMMON OPIOIDS

The most commonly prescribed opioids are methadone, oxycodone and hydrocodone. Prescription drugs accounted for 40% of opioid overdose deaths in 2016, according to the CDC. Addiction to prescription opioids is the biggest risk factor for starting illicit heroin.

In recent years, the rise of the synthetic opioid fentanyl has created a whole host of new and more dangerous challenges. Fentanyl is 50 times more potent than heroin and 100 times stronger than morphine: it only takes 3 milligrams of it to be lethal. The CDC said death rates from fentanyl doubled from 2015 to 2016, when more than 19,000 deaths occurred.

"The opioid epidemic is not new," said Dr. Andrew Kolodny, co-director of the Opioid Policy Research Center at Brandeis University in Waltham, Massachusetts.

"It took a while for policymakers to think about it in the right way. There is a flurry of activity across the country, all trying to tackle the problem through public health interventions. The efforts are new so we don't yet have a good evidence base for what works and doesn't work."

Agriculture-based rural America is the center of a perfect opioid storm -- the risk of injury and need for pain relief may be greater while working on farms than in any other occupation.

He said doctors across the country have become increasingly likely to prescribe opioids rather than non-addictive alternatives to patients.

"I see these people as victims in our era of aggressive prescribing," Kolodny said.

"There hasn't been an honest discussion about how to treat these people."

Editor's Note: This is the first story in DTN's series about opioids.

Next in the series: How opioids became a problem. 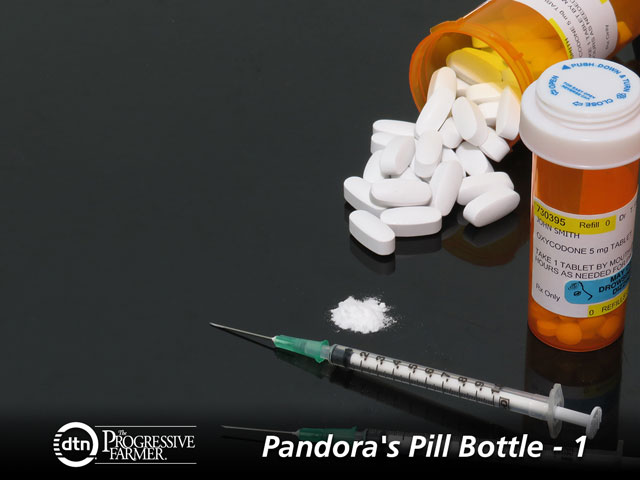