OMAHA (DTN) -- They were found dead in front yards and in cars on the streets of rural Jackson County, West Virginia.

The county of 29,000 people north of Charleston saw a side of itself many people didn't know existed.

Most of the victims had access to leftover prescription painkillers from family or friends.

"Most of the kids were from the same graduating class."

For the first time, after those tragic deaths, the county started an education program on prescription drug abuse.

Jackson County's take-back program in 2009 made a collection of an eye-popping 100 pounds of pills, excluding packaging.

While opioids in the form of heroin are sold illegally, opioid painkillers are widely available legally and often easily accessible in medicine cabinets across the country.

Addiction has become a problem, coinciding with a huge expansion in the number of opioid prescriptions in the past 20 years.

A July 2017 Centers for Disease Control and Prevention study said opioids prescribed in the United States actually peaked in 2010 at 782 morphine milligram equivalents per capita. That number fell to 640 in 2015, though the reasons are unclear.

"Despite significant decreases, the amount of opioids prescribed in 2015 remained approximately three times as high as in 1999 and varied substantially across the country," the study said.

Efforts have been expanding to collect opioids and reduce the temptation for abuse.

The U.S. Drug Enforcement Agency holds an annual national drug take-back day. Since May 2016, the event at more than 5,000 locations across the country has collected about 5,484 tons of prescription medications. It is unclear how much of that is opioids.

Some places, such as the Wexner Medical Center at Ohio State University, have adopted a year-round program to take back expired, unwanted or unused drugs. Some companies, such as CVS Health and Walgreens, have also installed machines or safe medication disposal kiosks for taking back medications.

Because young kids often find and use opioid painkillers from relatives' medicine cabinets, Haskins said her efforts focus heavily on educating kids on dangers of medications as early as elementary school.

"With kids, we need to tell them, 'Don't take anything that doesn't belong to you,'" she said. "A lot of these kids had access to meds and it was leftovers in the house and parents are not counting meds. Parents, tell them to never go into a medicine cabinet. Nobody wants their kids to be the next one. We talk to seniors (elderly) and tell them to switch locations for their medicines, put them in a new place. Don't put them in obvious places."

However, it isn't just the kids who can get hooked on drugs.

Farmer Doug Payne, from Brown County, Indiana, is a former heroin addict. He said he was introduced to the drug as a student at Purdue University.

On the farm, he said, he used anhydrous to produce methamphetamines -- then sold the meth to help support his drug habit.

Payne said he suffered a nervous breakdown and was beginning to lose everything. That's when he decided he needed help. Narcotics Anonymous was the answer.

"I came from a middle-class family, a wonderful upbringing," Payne said. "I had no business messing with drugs. I started drinking and smoking pot. It about killed me. More than one time I was looking at 20-some years in prison for use. Everybody's got it in them."

Payne, who has been drug-free for 11 years, said he is frightened by the wave of opioid abuse in the countryside.

"I talk to kids at school and tell them this is your one shot," Payne said. "One time and you could die. You'll see people eight to nine months clean, then dead the next day from overdose."

That includes prescribing the right dose to the right patient, analyzing prescribing patterns to stop fraud, offering alternatives to opioids, partnering on drug take-back programs, and conducting education programs to warn of the dangers of opioids.

Jamey Lister, assistant professor in social work at Wayne State University in Michigan, said opioids are particularly dangerous because it takes less time to become drug-dependent compared to other substances.

"Once people start using them regularly, three times a week or more, it is challenging to stop using without carefully stepping off of them," he said.

"The danger as well is that if people go cold turkey and then later relapse, that relapse can prove fatal since their body has lower tolerance to the drug than when they were using regularly."

Sometimes, small-town pharmacies or pharmaceutical distributors have raised suspicions on their prescribing practices.

In February 2018, the House Energy and Commerce Committee launched an inquiry into reports from West Virginia that several small-town pharmacies were receiving large volumes of opioid painkillers from drug distributors.

Distributors, including McKesson, Cardinal Health and AmerisourceBergen, supplied Family Discount Pharmacy in Mount Gay-Shamrock, West Virginia, (population 1,779) with about 16.2 million doses of hydrocodone and oxycodone between 2006 and 2016. A pharmacy in Stollings, West Virginia, (population 316) received about 3.7 million doses in the same time period. Combined, the Mount Gay-Shamrock and Stollings areas received about 20.3 million doses of hydrocodone and oxycodone in total prescriptions for customers, with those two pharmacies selling the majority of those two medications.

Dublin, Ohio-based Cardinal Health Inc. and other pharmaceutical wholesale distributors have been named as defendants in more than 1,000 lawsuits in nearly all states relating to the distribution of prescription opioid pain medications.

According to Cardinal Health's reports to the U.S. Securities Exchange Commission, the company is named in more than 300 of those cases and vows to "vigorously" defend itself. Settlement discussions are ongoing in those cases filed by government entities. Many cases allege drug companies have contributed to the spread of illicit opioids.

In small towns across the country, so-called "doctor shopping" to obtain prescription opioids has become a serious problem.

Rural health providers are trying to keep an eye on prescription traffic at local, middle-of-nowhere pharmacies. Doctor shopping is the practice of visiting multiple physicians to obtain multiple prescriptions for otherwise illegal drugs.

The National Institute on Drug Abuse in 2013 examined 146 million opioid prescription records from 76% of retail pharmacies. The study concluded there were about 135,000 suspected doctor shoppers. Each member of that group filled an average of 32 opioid prescriptions with 10 doctors in a 10-month period.

Dr. Parinda Khatri, chief clinical officer at Cherokee Health Systems in Knoxville, Tennessee, which serves some of the most-rural counties in the country, said rural health care providers have implemented programs to better track prescriptions, but progress is slow.

"I had a woman who had 56 prescriptions from 24 providers," she said.

"It is quite eye-opening to see. They're selling it, getting a lot to support their own habit. People do a lot of doctor shopping, and we're seeing an increase in theft and violence."

Editor's Note: Next in the series: A closer look at the impact of opioids. 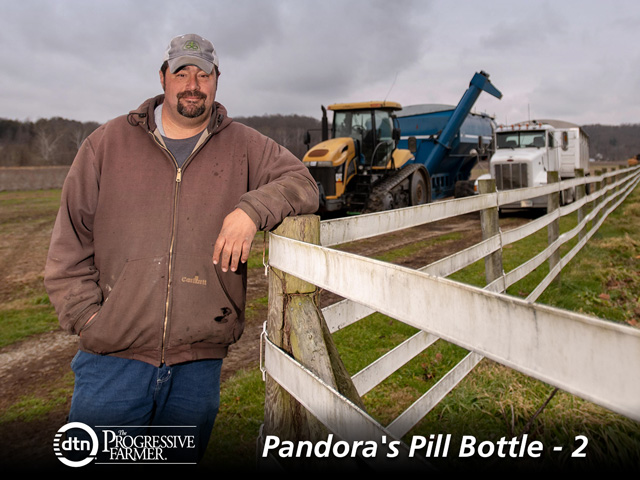