A solemn-voiced police officer said their daughter, Cami Dyreng -- a former scholar, college marching band member, high school cheerleader, and mother of three boys -- was found dead from a heroin overdose back home in their farming town of Gunnison, Utah.

"She knew if she used heroin again she would die," Annette told DTN as she choked back tears. "She was trying to die. I think it was just her mental health. It was the emotional battle. Where her life was, it was depressing. She just had no hope. She just couldn't see a bright future."

Near the time of Cami's death, she appeared to be on the road to recovery, they said, and was more like the cheerful girl of her youth.

"The last 16 months of her life, we had great times with her," Richard said softly.

However, Cami dabbled in heroin again less than one month before she died. For the first time in a long time, Cami's spirits were so low she sat out the family vacation.

Then Richard and Annette got the call that their 39-year-old daughter was dead.

Almost two years later, all the Dyrengs have left now are photos.

There is a grade-schooler in a red plaid dress and two red-and-white bows in her hair; a happy, little girl in a white dancing suit as she stands still with her arms stretched out; an energetic teenager in her blue-and-white cheerleading outfit and pom-poms in each hand; a beautiful young woman posing barefooted in her white wedding dress; and a mother holding her baby lovingly to her chest.

The reasons people turn to opioids, either through prescription or illegal drugs, are as varied and as complex as the human condition itself.

Even with all of the right treatment tools in place, there are no guarantees for happy endings, no matter how happy the beginnings.

Cami grew up on the family's 1,200-acre alfalfa, corn silage and small-grains farm near Gunnison, a small town of now about 3,300 people.

As a young girl, Cami was a vivacious, intelligent spirit who collected rocks and beads to make jewelry for everyone she knew. She loved hiking and rock climbing. That was her freedom, her escape.

However, something changed in her teens.

"She was an almost-perfect child," Richard recalled. "When she was younger, she was just a wonderful child. She went through puberty and came out different."

Cami's opioid addiction initially started with mental health problems identified during puberty, her father explained. Cami was diagnosed as bipolar and had anxiety issues. The mental illness led Cami to self-medicate at age 16, starting with methamphetamines in her teens.

Drug addiction became her prison. There was no turning back.

"It was very difficult," Richard said slowly, choking back his words. "She was angry often. It made things difficult. She had a hard time maintaining relationships. Guys would come around and take advantage of her. She was a runaway train. She was really depressed. She had a vision of what could have been. The drugs took over her life."

The drugs led to a change in friends and attitude. Cami distanced herself from family, her parents said. She spent more time alone in her bedroom and her interests changed.

Using drugs put her on a downward spiral for 20 years.

Cami was arrested on drug charges and was jailed twice in Sanpete County in 2015.

She pled no contest to possession or use of a controlled substance on Feb. 11, 2016. Cami was sentenced to a year in jail and ordered to pay a $4,783 fine. With time served, she was jailed for 50 days and placed on supervised probation for 24 months. As part of her sentence, Cami was required not to use drugs, continue with ongoing treatment and to take prescribed medications.

Around the same time as her legal troubles, Cami lost her three sons, Canyen, Brooks and Sawyer, in a divorce settlement -- a crushing blow.

Cami struggled to see life beyond her small town. She yearned to start a new life. She once attended Snow College and Southern Utah University but did not finish her studies.

She later applied for admission to the psychology department at Utah State University. But scars from more than 20 years of drug abuse lingered. Her illicit drug arrests scared away college admissions officials.

Cami's story is sadly all too common.

Annual opioid overdose deaths in the United States have increased dramatically from 1999 to 2016 for ages 35 to 44. Victims in that age group accounted for 3,238 overdose deaths in 1999, according to a national database maintained by the Henry J. Kaiser Family Foundation. By 2016, there were 9,747 deaths -- the highest of any age group in the country.

The rate of overdoses in rural areas is growing faster than in urban centers, although needed medical services often are few and far between. Patients must travel hundreds of miles for help in some areas of the country.

Although opioid addiction is a common rural experience, it is often swept under the carpet.

An American Farm Bureau Federation survey of farmers and ranchers administered by Morning Consult in October 2017 found an interesting dichotomy with the prevalence of opioid addiction and attitudes in rural America.

Three in four farmers and farmworkers surveyed said they are or have been directly affected by opioid abuse. Yet, the same survey showed one in three adults said there is a "great deal of stigma" associated with opioid abuse in their communities.

On a macro-economic level, there appears to be a correlation between opioid death rates and unemployment. The story may be entirely different depending on the community.

A study by Christopher J. Ruhm, an economics professor in the Frank Batten School of Leadership and Public Policy at the University of Virginia, however, found while narratives often tell the story of economic despair as a driving force of opioid addiction, the data doesn't entirely support it.

"These results suggest that the 'deaths of despair' framing, while provocative, is unlikely to explain the main sources of the fatal drug epidemic and that efforts to improve economic conditions in distressed locations, while desirable for other reasons, are not likely to yield significant reductions in drug mortality," Ruhm stated in his study.

Ruhm said a more likely driver is a change in drug environment, such as a move from prescription opioids as the primary driver of opioid overdose deaths, to the rise of heroin and fentanyl as a recreational drug. Fentanyl is a synthetic drug similar to morphine, but is said to be 50 to 100 times stronger -- and it's no longer the strongest.

The U.S. Food and Drug Administration on Nov. 2, 2018, approved a new pain tablet that is said to be 1,000 times more potent than morphine and 10 times stronger than fentanyl. The tablet was approved as a fast-acting alternative to intravenous painkillers. Concerns already are rising about the danger of this new drug reaching the illegal street market.

But even before a drug is sold illegally on the streets, parents struggle to figure out how their sons and daughters slipped down this path in life in the first place.

The Dyrengs believe a lack of opportunity near their town 130 miles south of Salt Lake City was ultimately the missing piece in their daughter's rocky road to health.

Even with drug counseling and other health services available in the Gunnison area, along with loving family and friends around to help, Cami struggled to find a new path.

"Counseling wasn't good for her, she fooled them," mainly because Cami learned to say all the right things to counselors to hide her inner turmoil, Annette Dyreng said. After all, Cami studied psychology at Snow College and Southern Utah University.

Perhaps Cami's life could have changed, the Dyrengs said, if not for the stigma society assigns to drug users.

All Cami wanted was a second chance.

"The way laws and society is, the first priority is punishment," Richard Dyreng said frustratingly. "The first thing, they take away her driver's license. In the little town we live in, everyone knows her problems. She couldn't get a job."

At the time of Cami's death, the unemployment rate in Sanpete County stood at just 4.4%, according to the U.S. Bureau of Labor Statistics. That was far below the national unemployment rate of 7.1% in January 2017.

Anne Hazlett, assistant to the secretary for rural development at USDA, said in an interview with DTN that economic opportunity is just one part of the big picture in attacking the opioid crisis in rural America.

In sharing Cami's story, the Dyrengs said they hope to help other parents who suspect their children are using drugs.

Cami sought help at Central Utah Counseling Center in Ephraim, Utah, and counseling was available through her church.

"She really needed in-patient help, but it was too expensive," Annette said.

She needed acceptance in her hometown.

"In her death, tons of people showed up to pay tribute," Richard said. "We stood in line for three hours shaking hands. All the help in the world would not help if communities are not willing to make a change."

Editor's Note: Next in the series: What needs to be done with opioids? 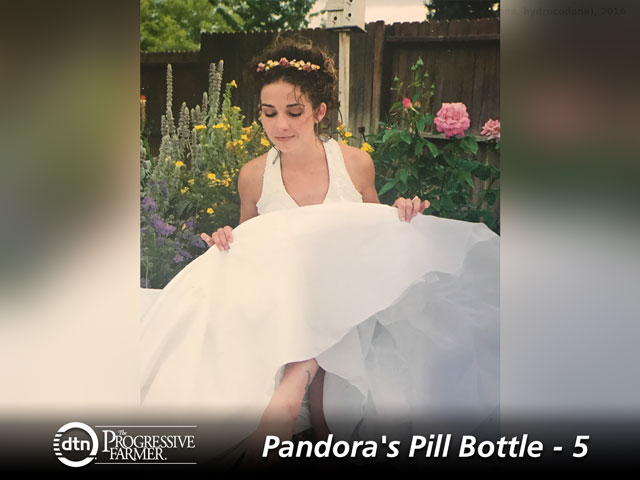