OMAHA (DTN) -- The signs were alarming.

The once physically fit employee in his 30s, who was usually prompt and hardworking, began showing up late to work back in 2014 at Midwest Poultry Services (MPS) in Mentone, Indiana.

"He came to us and said he's got an (opioid) addiction," said Dan Krouse, the company's general manager. "Until it hits you in the face, you don't know it exists."

Krouse made a visit to the employee's home.

The filthy and cold living conditions were shocking, but Krouse and the man sat down for a conversation.

The employee attended meetings at Narcotics Anonymous and visited a local pastor, but at 130 pounds, he was a shell of his former muscle-bound self. For years he battled chronic back pain as a result of a car accident.

A few months later, he died of a drug overdose.

Midwest Poultry Services is one of the nation's largest egg producers, earning Mentone the nickname The Egg Basket of the Midwest.

The painful reality is small communities with agriculture-based employers across the country are seeing the effects of an opioid crisis on the rise and it's hard to crack open the problem.

The base of workers is small and the demand for help high.

Some employees seek help. Some don't.

Krouse suspected other employees also may be fighting the effects of pain medication. They fall asleep at work -- even while standing up.

Another employee was training to become a plant manager. At some point, the man started showing up late to work, putting MPS in a tight spot, considering the employee base is small.

"We were counting on him to supervise people," Krouse said. "It's not like we can hire somebody new. This guy just disappeared. A few months later, we found out he had an addiction. He was so embarrassed."

As Krouse discovered, and other employers continue to learn, the opioid problem is much bigger than just within the walls of this single company of 575 employees, or this single town of 979 people.

Austin, Indiana, experienced an outbreak of human immunodeficiency virus, or HIV, in 2014. There were 194 people infected in the town of 4,200. The disease spread through intravenous drug injection. This is of particular concern for users of heroin, an opioid derived from morphine.

The Centers for Disease Control and Prevention said the lifetime cost of treating those patients could approach $100 million. Further, one in five Austin residents live below the poverty line.

Because poverty is common in rural areas, small towns lack resources to build critical treatment infrastructure. As a result, beating the opioid problem may require state and federal governments to invest in that much-needed infrastructure.

"Many rural communities lack residential treatment," the National Advisory Committee on Rural Health and Human Services said in an analysis. "Austin is no different, where those waiting for a treatment bed must travel to nearby communities and wait times can be up to eight weeks. Many who seek treatment are at higher risk of relapsing due to financial burdens and a shortage of supportive services within the county."

Since the Austin outbreak, the CDC identified 220 counties across the country where "similar conditions create vulnerability" to HIV and hepatitis C -- both potential risks for heroin users.

"Many rural residents live in poverty and lack the means to pay for treatment, and many don't have health insurance," he said. "Poverty and low-income levels are key risk factors for developing OUD (opioid use disorder)."

Krouse said some peer-reviewed studies show companies incur an average $11,300 in lost production per year for each addicted employee. An addicted person is estimated to cost a community on average more than $40,000 per year to treat addiction.

A 2018 study by the American Action Forum, a non-profit policy research group, found more than 2 million working-age people were not in the labor force because of opioids in 2015. Between 1999 and 2015, the decline in labor force participation cumulatively cost the United States economy an estimated 27 billion work hours.

In 2016, researchers at the CDC estimated the total economic impact of opioid overdose deaths at $78.5 billion in 2013. An analysis by the Altarum Institute, a health policy non-profit group, puts that at $95.3 billion in 2016.

A White House Council of Economic Advisers analysis in November 2017 estimated the economic cost to society of lives lost to opioids in 2015 at $504 billion.

Rural hospitals particularly are hit hard by opioid-related treatment costs, because of a shortage of resources. In 2016, the Nebraska Center for Rural Affairs stated that rural hospitals in the U.S. have been closing at a rate of one per month since 2010 -- at a time when opioid medical emergencies have been on the rise.

The research reveals even a handful of employees with opioid addictions in a small-town business can contribute to overall losses nationally in the billions of dollars economically.

While opioids are a national problem, dealing with it in the small Indiana town of Mentone needed to start at ground level.

Krouse said his community has started to talk more about the opioid epidemic. Momentum toward finding solutions is starting to build.

Earlier in 2018, Krouse was part of an opioid symposium held for Indiana farmers. The event drew a crowd of 400.

"Discussion is really starting to happen at an increasing pace," Krouse said. "It shows you how many people talk about this. Now it is a lot more out in the open -- people who lost loved ones.

"What I really hope, as a community, we will have a more defined pathway for someone with an addiction. My hope is that as we make this more of a people issue, the path is much clearer."

Editor's Note: Next in the series, a profile of some of the people directly affected by opioids. 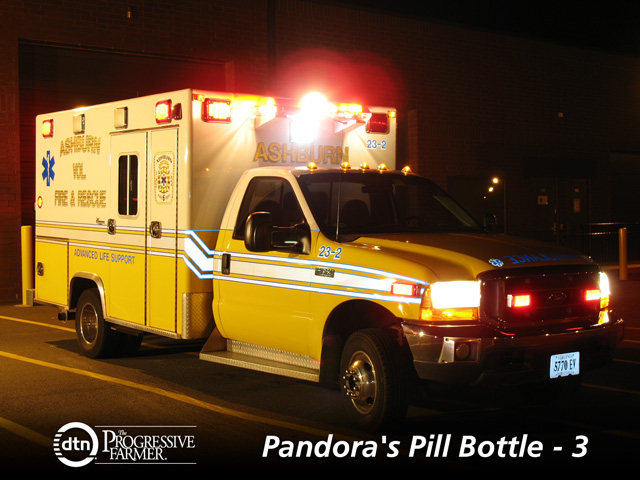