OMAHA (DTN) -- When the White House held its virtual forum Monday about unfair market practices of meatpackers and USDA investment plans for up to $1 billion in new packing capacity, White House officials cut off the event livestream before some of the producers invited got a chance to speak.

The event itself was a surprise -- given some of the other issues within the country -- but it was significant that President Joe Biden kicked off 2022 focusing on unfair and competitive practices in livestock and meatpacking industries.

Among the producers who spoke to the president and cabinet members after the cameras were turned off were Brent Johnson, president of the Iowa Farm Bureau, and Kelsey Scott, programs director for the Intertribal Agriculture Council.

"We had a nice exchange on the Grassley bill -- the Cattle Price Discovery Act that's sitting in the Senate right now -- and I encouraged him to find some ways to expedite that through as soon as possible," Johnson said. "So, he fully understood. We had a nice dialogue about a couple of different things."

Sen. Chuck Grassley's (R-Iowa) bill -- a bipartisan effort with 13 Senate co-sponsors -- would establish minimum regional negotiated cash trade for packers and improve the Livestock Mandatory (Price) Reporting Act, known as the LMR, to provide more data on meatpacker purchases of cattle. It would also create a library of cattle contracts -- similar to language that passed the House of Representatives in mid-December.

Johnson added there are opportunities for reforms in the next update or extension of the LMR that currently lasts into mid-February to give Congress a chance at reforms or a longer extension. The House passed a bill in December by a vote of 418-9 to again extend the LMR through September to provide more time for possible broader reforms. The House also passed its Cattle Contract Library Act, H.R. 5609, by a vote of 411-13. That bill directs USDA to establish a library of alternative marketing agreements to provide more details on the premiums paid under those contracts between producers and packers for the contract sale of fed cattle. (See https://www.dtnpf.com/…)

"That's an issue that's coupled right up there with those same topics," Johnson said. "So, hopefully there is an avenue to hitch those things together."

The White House announced Monday it would spend as much as $1 billion to increase packing capacity and job training and recruitment for meatpacking workers. As much as $800 million will go towards financing loans and grants for facilities to build or expand, as well as related infrastructure needs.

"That will basically improve shackle space through small- and medium-sized packers, creating a marketplace relief valve," Johnson said. "I think that's where a lot of these funds will be geared towards."

Another key point Johnson noted was the Biden administration emphasizing the need to enforce the Packers and Stockyards Act.

Scott, director of programs at the Intertribal Agriculture Council, and a rancher on the Cheyenne River Sioux Indian Reservation in South Dakota, also got to address Biden, Agriculture Secretary Tom Vilsack and Attorney General Merrick Garland. Scott said producers were asked about their own experiences and about particular infrastructure needs. She was also asked about the kind of challenges or barriers facing Native American producers.

"We talked quite a bit about the need for a fairer market and how compartmentalized or regionalized, or monopolized the processing sector of the industry is and how that directly impacts us as livestock producers out here on the land," Scott said.

Scott added, "I will say that it's not often on the first Monday of the year where you get to have that kind of conversation with the president."

The barriers that rural communities face are even more prevalent in reservations and tribal communities, Scott said. Some of those challenges in the past have been due to divisions within federal agencies and regulations that required Native Americans to go through the federal Bureau of Indian Affairs and prevented those farmers and ranchers from accessing USDA programs, particularly for rural development.

"We've had a historical void of economic investment and activity throughout much of Indian country as a result of a number of things, but most directly it really correlates to the lack of access historically to USDA resources for infrastructure development."

Scott added, "We had historical experiences of not qualifying for particular programs. The majority of our American Indian farmers and ranchers are prohibited from being able to incorporate or establish an enterprise based on Bureau of Indian Affairs regulations and tribal office regulations around leasing permits -- needing to be a sole proprietor. So that does place our American Indian farmers and ranchers at a disadvantage in being able to access particular business resources that would help generate economic development."

More recently, Scott said USDA programs have become more accessible and Indian producers who own a small processing plant, for instance, may be more likely to qualify for some of those USDA funds expected to be released during the next year. "That's due largely to part of the work of the Intertribal Agriculture Council, which is part of why I'm so passionate to be part of the team and consider it a privilege to carry out these conversations day in and day out," Scott said.

Scott wrote a column about Monday's panel discussion and challenges facing livestock producers on the land. She noted, "There is not a quick fix for the extreme crisis that America's farmers and ranchers are facing. We're looking at the result of generational abuse, neglect and harm inflicted upon our rural communities."

The plans laid out by the White House are a first step in re-establishing a better quality of life for farmers and ranchers, Scott wrote. She said the White House action plan "puts more power in our hands than we've seen before. Now is the time to dig in and learn how this can be a tool for us to reclaim ownership of our food systems of Indian Country."

Johnson became president of Iowa Farm Bureau in December after Craig Hill retired following 10 years as IFB's president. Johnson is a corn and soybean farmer in northwest Iowa and also operated an independent crop consulting business with his wife that focused on soil fertility and precision agriculture. Johnson said he was a little surprised when he got the call that the White House wanted to do such an event.

"Ultimately, at the end of the day I was really proud I was able to voice our members' opinions to the administration," Johnson said. "So, it's nice to be heard in an environment like that, have some one-on-one-dialogue with the president, Secretary Vilsack and Attorney General Garland."

The White House livestream of Monday's event can be found at https://www.youtube.com/…. 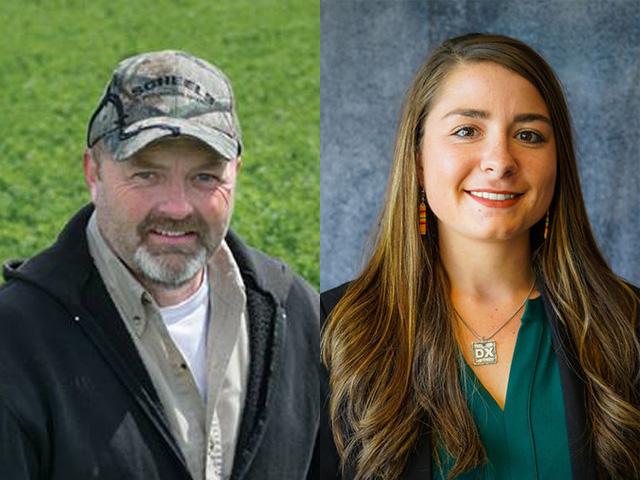