OMAHA (DTN) -- Laying out his administration's plan to invest as much as $1 billion to expand competition in the meatpacking industry, President Joe Biden said he overheard his wife, her sister and a friend on Sunday talking about a pound of hamburger costing more than $5.

A pound of beef today cost $5 compared to less than $4 before the pandemic, Biden said as he opened a "roundtable" discussion on Monday with cabinet members and a handful of producers on meatpacker consolidation.

The president started 2022 highlighting what the White House sees as unfair market practices by the largest meatpackers and detailing plans to diversify the meatpacking industry while increasing enforcement over antitrust practices in the industry.

The plan rolls out a variety of meatpacking processing initiatives at USDA, plans to tighten up enforcement of the Packers and Stockyards Act, and a strategy by USDA and the Department of Justice to "better coordinate" antitrust efforts as well.

The White House cited that the meat and poultry processing sector "is a textbook example" of corporate consolidation that is "hurting consumers, producers and our economy." The White House cited that the four largest packers control 85% of the beef market and 54% of the poultry processing. In pork, it's about 70% of the market.

"In too many industries, a handful of giant companies dominate the market," Biden said at the roundtable. The president pointed to the statistics on packer concentration. "Without meaningful competition, farmers and ranchers don't get to choose who they sell to."

During the White House roundtable, Scott Blubaugh, president of the Oklahoma Farmers Union, pointed to packer consolidation and noted that "Not since Teddy Roosevelt have we had a president willing to take on this issue." Blubaugh added, "For too long, we have seen the multinational meatpackers suck out all of the wealth out of rural America, to go to their corporate coffers, and in some cases overseas."

Biden asked Blubaugh about "going locally" with smaller operations to sell cattle. "How far do they have to take their cattle to actually sell them?"

Blubaugh responded that it can be misleading to suggest that there are four packer options. In many cases, a producer may have only one major packer in their region that is buying livestock.

The White House detailed $1 billion from the American Rescue Plan to expand packing capacity for independent meat processors through an array of initiatives. Vilsack had announced as far back as July that USDA would be providing up to $500 million in loans and grants to independent packers, but those funds have not been released.

USDA now will release plans for at least $375 million in funds by opening a request for proposals for approximately $150 million to "jump-start" at least 15 processing projects and release those funds this spring. Another $225 million will be rolled out in phase two this coming summer.

Also, to help independent packers, USDA will release another $275 million in loan guarantees with lenders to provide "long-term affordable capital" with those funds expected to be released by the summer.

USDA will also dedicate another $100 million to support the expansion of the workforce for packers "to support development of a well-trained workforce, safe workplaces, and good-paying, quality jobs by working closely with partner organizations, including labor unions, with expertise in workforce development and worker health and safety."

Another $100 million will go to reduce overtime inspection costs for small and "very small" processing plants to keep up with demand. Those funds had also been provided by Congress to help small processors ship meat across state lines with federal inspection approval. USDA had already issued $32 million in grants to 167 meat and poultry processing facilities for them to become certified for federal inspections.

Along with that, the Biden-Harris administration also highlighted plans to tighten the Packers and Stockyards Act, revisiting rules that USDA has been trying to finalize since the late days of the Obama administration. USDA has three proposed rules to tighten enforcement of the Packers and Stockyards Act meant to provide producers with more leverage and the ability to sue for unfair competitive practices by packers. The Trump administration had finalized its own P&S rules late last year that the Biden team immediately halted when they came into office.

"The last administration weakened that law, making it possible for the abuse that we're seeing now," Biden said. "We're going to strengthen that law to make sure it works as intended."

Attorney General Merrick Garland also highlighted that the Department of Justice will work with USDA on a strategy to help ferret out unfair competition practices by meatpackers.

The American Farm Bureau Federation, the National Sustainable Agriculture Coalition and the U.S. Cattlemen's Association were among the groups that commended the White House for taking actions to promote fairness in dealing with livestock markets.

"Today's announcement puts into motion what our members have, for years, urged action on -- empowering the independent producer and processor to create a more robust and resilient food system," said Brooke Miller, president of USCA.

R-CALF USA also pointed to progress in the White House plan, citing the "massive amounts of government funding" that will go to increase marketing options for producers. "We recognize that this level of government involvement is unprecedented and that it's critical for reversing the decades of inattention, neglect and denial that facilitated the elimination of competition in our U.S. cattle industry," said Bill Bullard, president and CEO of R-CALF.

Still, Bullard said his group remains skeptical about plans to deal with decades of non-enforcement when it comes to antitrust last and the Packers and Stockyards Act.

The North American Meat Institute, which represents the packing industry in Washington, D.C., criticized the White House plan, saying it would not help either consumers or producers. NAMI said the Biden administration's "government intervention" in livestock markets is "an attempt to increase prices livestock producers receive while blaming inflation on private industry," said Julie Anna Potts, president and CEO of NAMI.

"The Biden Administration continues to ignore the No. 1 challenge to meat and poultry production: labor shortages. This tired approach is not surprising because they have refused to engage with the packing and processing sector they attack, going so far as to hold a roundtable on meatpacking without a single beef or pork packer present."

Yet, despite NAMI's complaints about labor issues and other challenges facing packer, the two major packers that are publicly traded have continued to report double-digit growth in sales and earnings. Tyson Food in November reported "record performance in our beef segment" for the fiscal year of 2021 at $3.2 billion in operating income in its beef sector, an 18% operating margin, and more than twice the operating income reported for 2020.

Brazilian packer JBS also reported in November its U.S. beef segment reported a gross profit of nearly $1.72 billion, or a 23.3% net return, for its third quarter -- more than three times the profit reported for the same quarter in 2020.

In another move, USDA will also issue new "Product of USA" labeling rules to help consumers better understand where their meat comes from. Under current rules, meat can be labeled "Product of USA" if it was processed here -- meaning livestock raised outside the U.S. can be labeled Product of USA if the animal or meat is further processed in the U.S. The new rules, which will be voluntary, are expected to better define products from U.S. origin.

"We think this is going to help consumers know exactly how their dollars are being spent," Vilsack said.

The president also credited work in Congress to create more transparency in cattle markets. The White House endorsed legislation by a bipartisan group of senators that would require a set level of negotiated cash trade in cattle markets based on regions in the country. That legislation has been divisive in the Senate and in the cattle industry despite multiple hearings last summer about the state of cattle markets. 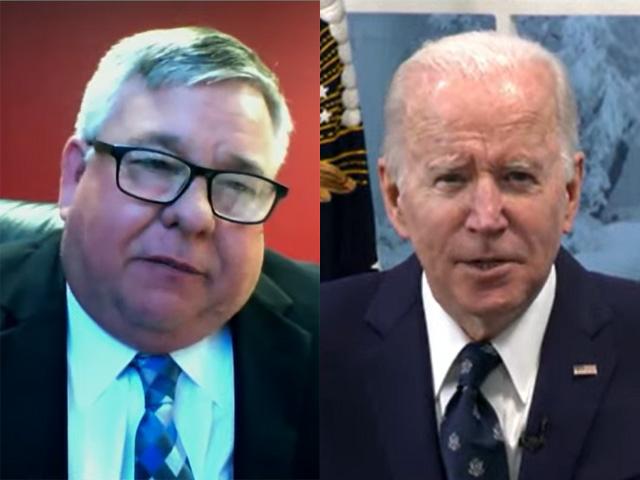