NEW ORLEANS (DTN) -- Agricultural ministers and secretaries from G-7 countries on Friday had a call with Ukraine Agriculture Minister Roman Leshchenko, who talked about the desire and will of Ukrainian farmers to still try to grow a crop. "And what they need is fuel," U.S. Agriculture Secretary Tom Vilsack said Friday.

Talking to reporters after his speech at Commodity Classic in New Orleans, Vilsack said Leshchenko's big request from European countries involved fuel needs for farmers. "He is putting us on notice we need to do as much as we can," Vilsack said.

Speaking at Commodity Classic's general session, Vilsack talked more about the conversation with Leshchenko, who he described as talking to G-7 ag leaders from a bunker in Ukraine. "And I thought to myself, what incredible courage it takes for him to visit with us -- to plead with us -- for supporting help. As I listen to him speak about the circumstances in his great country, it impressed up on me the importance of all of us who live in a free and democratic country to never take that privilege for granted." That drew a round of applause from farmers in the crowd.

Since the Russian invasion of Ukraine began, Vilsack has repeatedly sought to tamp down speculation or concerns about the wide-ranging impacts of Ukraine being taken out of the global agricultural markets, even for a short time. Still, the secretary said leaders from the World Food Program also spoke to G-7 agricultural leaders on Friday, concerned about hunger, the pandemic, drought and Ukraine. "We're talking hundreds of millions of people" at risk for hunger, Vilsack said.

Vilsack said USDA is looking at its aid programs, though many of those U.S. aid programs flow through the U.S. Agency for International Development (USAID). Vilsack said USDA has a trust fund available, but it requires jumping through a lot of hoops for USDA to use that aid. So, USDA is going through the process to make it easier to open up those funds if and when the time comes.

"So, we are going to put us in position to respond as quickly as we can, whatever the circumstances might be, when we have the facts to dictate what we do -- not speculation," Vilsack said.

Vilsack pointed to tools such as the Post Application Coverage Endorsement (PACE) pilot for split-application fertilizers in some Midwestern states. (See: "Split Nitrogen Applications? There's Insurance for That" at https://www.dtnpf.com/…)

The secretary also touched on research to make fertilizer applications more efficient. He praised state attorneys general that are collectively looking into questions about fertilizer prices such as "whether or not all of the increases that we have had in this country" are legitimate. He added, "So we will continue to promote those questions being asked."

While pointing to last year's $177 billion record agricultural exports, Vilsack talked about China during the trade war undertaking "systematic process of reducing their reliance on the U.S." Before the trade war, U.S. represented 25% of all agricultural products going into China, but afterward that came down to 18%. "They diversified," Vilsack said.

That was a message to take to heart as well. "As important as that market is, it can't be the only market."

Talking about the ability of renewable fuels to bring down fuel costs, Vilsack said, "We know -- you know and I know -- that E15 can do that, B20 can do that," drawing a round of applause from the Classic audience.

Speaking to reporters, Vilsack said USDA is spending $100 million to expand blender pumps and other infrastructure that will increase E15 availability. "As it becomes more available, consumers will see the price difference between E15 and regular gas, and then obviously they will make a decision on what they want to do."

Vilsack said he could not speak for other federal agencies, such as EPA, which sets the annual blend volumes under the RFS and also would be in charge of any rules to re-establish year-round E15. That topic has been a major focus among corn growers at Classic.

Vilsack also plugged USDA's $1 billion grant program for climate-smart commodities. The application deadline was extended from April 8 to May 6 for the larger tranche of grants that will run from $5 million to potentially $100 million. Vilsack stressed climate-smart commodities will not penalize farmers who have been early adopters of practices such as no-till or cover crops, but instead will quantify the results of those practices and measure reductions or savings in greenhouse gases "to allow us to set a standard about what a climate-smart commodity is."

The secretary said the voluntary greenhouse gas reporting from farmers under these pilot programs also would "help to educate the rest of the country on how sustainable American agriculture is today."

Vilsack added the program had drawn so much interest that it led to a number of requests from groups putting together large-scale projects to ask for more time to get their applications in.

"I think we can do this in a way that provides financial cover to producers that are involved in this and I believe we will see and explosion of technology and innovation that will inspire the next generation, and the next generation," Vilsack said.

Vilsack was asked about a letter from Sen. John Boozman, R-Ark., the ranking member of the Senate Agriculture Committee, to provide some flexibility on deadlines and sign up for the Conservation Reserve Program. The deadline for general CRP sign-up was set for March 11. Vilsack said CRP has a lot of flexibilities built into it that already allows for haying and grazing under certain conditions such as droughts.

"I certainly respect the senator's view on this. It's not one we necessarily share," Vilsack said. "Folks have the right to pull out of any contract at any time." He added, "I think we just need to maintain the existing flexibilities that we have and maintain them appropriately."

For more DTN coverage of this year's Commodity Classic, go to: 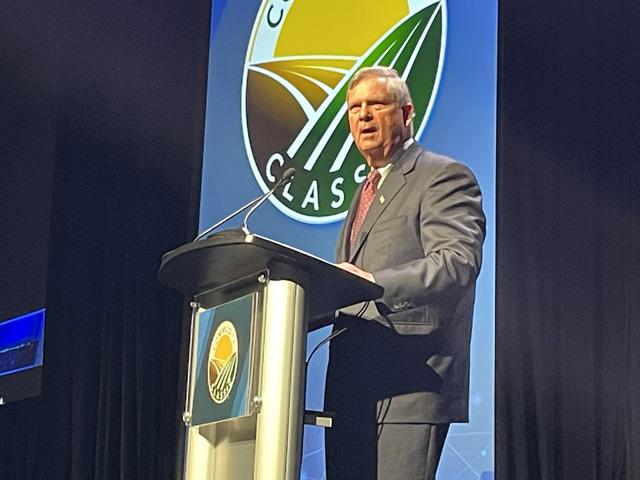