NEW ORLEANS (DTN) -- As USDA officials mingle with farmers at Commodity Classic this week, amid talk of price spikes and supply challenges come repeated questions about whether USDA is considering opening up the Conservation Reserve Program.

Robert Bonnie, USDA's undersecretary for farm production and conservation, said in an interview with DTN that CRP has been one of the major topics brought up by producers.

"There's sort of a sense that USDA is talking about this -- but we're not," Bonnie said. "We're moving forward on CRP with general signup that closes tomorrow (Friday). Crop prices are high, but we're going to see how many folks want to come in. And there is no interest in opening up the program."

Bonnie added it's important that USDA "get the right lands" into the program that are environmentally sensitive.

Bonnie spoke Thursday afternoon at Commodity Classic about the details of USDA's Partnership for Climate Smart Commodities, a pilot program with $1 billion from the Commodity Credit Corp., to develop a range of pilot programs. Once chosen, the pilot projects will offer ways for farmers to develop markets based on production practices that reduce or sequester greenhouse gases. The deadline for applications in the first round of funding -- for projects in the range of $5 million to $100 million -- is April 8.

"We have a lot of interest right now," he said. "There have been a few people asking for more time, but there's a lot of interest from commodity groups, conservation groups looking to partner with people in agriculture, some forestry groups as well. My sense right now is we will get a pretty diverse set of proposals in."

Speaking on a panel of commodity group CEOs, Chandler Goule, CEO of the National Association of Wheat Growers, said his farmers have concerns about the climate-smart program over issues such as cover crops and how farmers in more arid growing acres could be left out.

Goule added, "A lot of the cover crop programs that they're working on implementing are not going to be available to over 70% of wheat growers because that 70% is winter wheat," Goule said.

Tim Lusk, CEO of National Sorghum Producers, said sorghum growers are having discussions about the fine details of the program, pointing to geographical differences across regions as well. Lusk said sorghum farmers have been working with USDA's Natural Resources Conservation Services on programs related to carbon sequestration or emission reductions.

"And it's something that we believe there's a future there, but I think we have to understand that this is a learning process ... I hope it's not seen that we have all of the answers because I think certainly, from our crop's standpoint, there are still a lot of questions that have to be answered as part of this process."

Doggett said the biggest issue he hears about now from corn farmers is fertilizer prices and he said there should be some type of investigation into fertilizer markets.

"We are very concerned about the fertilizer markets, how fertilizers are imported into this country, and the companies that produce those products," Doggett said. "We are working hard to address that."

Doggett said there needs to be "some kind of investigation" into what's really happening with fertilizer markets and supply chains. The situation creates significant uncertainty "at a moment when the world's going to need us to maximize our productive potential."

Doggett added farmers are becoming increasingly innovative about how to use less fertilizer in their operations.

Doggett later noted, "Imagine what the nightmare would be for corn if for prices you had a three in front of it instead of a seven, and you have all of these input costs," he said. "It would be a whole different world today."

Lusk said all of the organizations are looking at ways to address fertilizer costs. Farmers could be facing a "perfect storm" when it comes to crop improvement tools. Lusk also pointed to problems with steel shortages, labor and trucking.

"So, this is a multi-faceted problem and one we'll have to work through," he said.

Steve Censky, CEO of the American Soybean Association and a former deputy USDA secretary under the Trump administration, said his growers are concerned about how the Biden administration's EPA makes decisions on crop protection tools that farmers rely on.

"Our message to them is, don't be making a decision to take tools away when we already have high herbicide costs and availability quite low," Censky said. "We can't be taking those tools away from farmers because that will just add to the supply chain issues."

That's one reason ASA, NGCA, NAWG and NSP have each tried to appeal to the International Trade Commission to rescind import tariffs placed on phosphate from Morocco, as well as opposition to putting tariffs on nitrogen products from Trinidad and Tobago that are under review. "It just does not make any sense and the economic circumstances just don't warrant that," he said.

Depending on the outcome of the fall elections, the House Agriculture Committee could have more than half of its members who weren't around for the 2018 farm bill vote, Goule noted. That would require spending a lot of time in 2023 just educating newer members about the various titles of the farm bill and programs involved in each area of USDA.

NAWG likely will wait until this summer to focus more on farm bill policies, but Goule and Censky both pointed out the need to raise reference prices. Censky said the reference price soybeans under the Agricultural Risk Coverage/Price Loss Coverage programs, $8.40 a bushel, is so low it didn't trigger payments even during the trade war with China that dragged down commodity prices. He also said higher production costs should factor into reference prices as well. 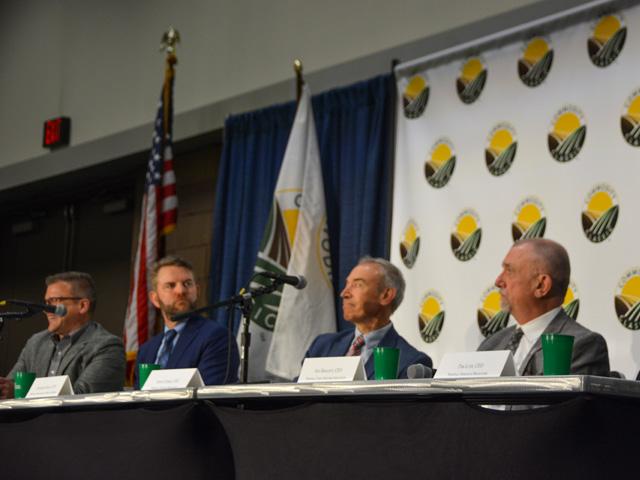