The growing number of cases comes as the spring migratory season is peaking in major flyways along rivers such as the Mississippi and Missouri rivers. Millions of geese and other migratory birds are moving through the region. Wild birds often carry HPAI but do not show symptoms. Domestic backyard and commercial flocks of chicken and turkeys are more susceptible to the bird flu carried in by those migratory birds.

As cases have cropped up, the European Union has banned imports of eggs for a ten-kilometer (6.2 miles) radius around each infected farm, though there have been no links to HPAI and the food supply. Japan, South Korea and other countries have also continued to place import restrictions on eggs or other poultry products after HPAI confirmations.

Also on Monday, the Iowa Department of Agriculture and Land Stewardship announced a commercial turkey flock in Buena Vista County, Iowa, had a confirmed positive case of HPAI. Last week, Iowa had its first cases of bird flu confirmed in a backyard flock. Officials did not immediately release the number of turkeys involved on this latest farm.

On Saturday, APHIS reported a commercial egg-laying chicken farm was confirmed with HPAI in Cecil County, Maryland, which is part of the Delmarva poultry production area. USDA did not immediately release how many birds were involved in the flock.

Press staff for APHIS did not respond during the weekend to questions about the flock sizes for the Maryland or South Dakota operations. The agency's website listing those details was not updated.

USDA on Friday confirmed HPAI in a flock of 240,000 broiler chickens in Stoddard County, Missouri, in the southeast corner of the state. As protocol, the farm was quarantined, and the birds will be depopulated on the premise. None of the birds will enter the food chain.

"The Missouri Department of Agriculture is working closely with federal animal health officials to contain and eliminate the disease," Director of Agriculture Chris Chinn said. "Protecting the health and welfare of livestock and poultry is a top priority. We encourage both commercial and backyard poultry producers to tighten their biosecurity protocols to help stop the spread of the virus."

USDA has reported cases in domestic flocks in 12 states. By earliest date confirmed, those include Indiana, Kentucky, Virginia, New York, Maine, Delaware, Michigan, Connecticut, Iowa, Missouri, Maryland and South Dakota. The new confirmed cases mean USDA, state officials and farmers have had to depopulate at least nearly 1.9 million chickens and turkeys since early February when the first cases were reported.

"While we have not seen HPAI in Nebraska since 2015, protecting the health of poultry in the state is a top priority," said Nebraska State Veterinarian Roger Dudley. "It's important for poultry owners to know about this disease, take the necessary steps to help prevent its spread, and protect Nebraska's poultry industry."

The Kansas Department of Agriculture's Division of Animal Health encouraged poultry owners, with both commercial and backyard flocks, to take steps to protect their flocks from avian influenza by monitoring their birds for symptoms and by implementing biosecurity practices.

"Protecting the poultry in the state is a high priority, and we need all poultry owners to be part of the effort to prevent the spread of disease in Kansas," said Kansas Animal Health Commissioner Justin Smith. "Our best defense is to follow strict biosecurity practices and vigilantly monitor birds for any signs of illness."

HPAI is an airborne respiratory virus that spreads easily among chickens and turkeys through nasal and eye secretions, as well as manure. Avian influenzas are classified as either low or high pathogenic based on the ability of a particular strain to produce the disease in domestic poultry. The virus can be spread in various ways from flock to flock, including by wild birds, through contact with infected poultry, by equipment, and on the clothing and shoes of caretakers. Wild birds often do not show signs of illness, but HPAI can be fatal to domestic birds.

The growing number of cases raises concerns that the poultry industry could experience an outbreak comparable to 2015, which USDA considers as the largest and most expensive animal-disease outbreak in U.S. history. In that outbreak, 43 million chickens had to be depopulated, including 33 million in Iowa alone. Another 7.4 million turkeys had to be depopulated as well. USDA spent nearly $1 billion for depopulation, disposal and producer indemnity payments in 2015. 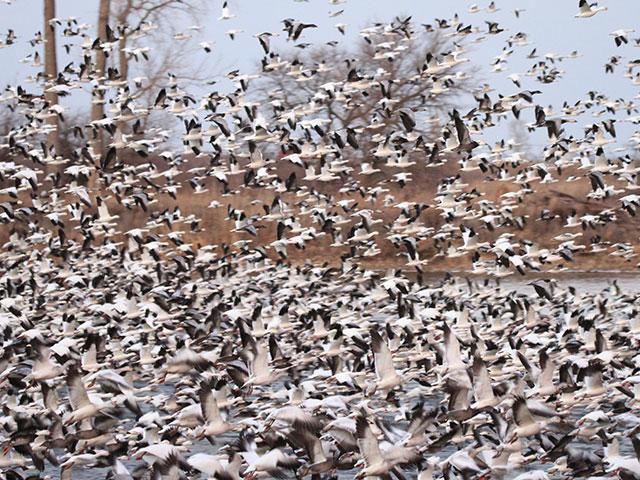