Kevin Shea, USDA's administrator for APHIS, spoke about the risks Tuesday and met with state agricultural directors at the National Association of State Departments of Agriculture (NASDA) winter policy meeting just outside of Washington, D.C. Shea stressed the importance of tighter biosecurity measures to the ag directors.

"We ask everyone in this room to double-, triple-, quadruple-down on the biosecurity message right now."

After a commercial turkey flock was reported as infected last week in Indiana, USDA followed up with a report Monday of a commercial broiler flock in Fulton County, Kentucky, and a backyard flock in Fauquier County, Virginia. Dubois County, Indiana, had a 29,000-bird flock test positive Feb. 8 with another similar-sized flock awaiting test results. Tests on another Kentucky flock are pending as well.

Shea said USDA monitoring of wild birds has led to a high volume of cases of the H5N1 strain found among migratory birds this year.

"Our wild bird surveillance has found tremendous loads of high-path avian influenza," Shea said. "So, everyone is at risk, not just in Kentucky or Indiana. So be prepared for that."

Shea acknowledged there will likely be more cases in commercial flocks as migratory birds begin to move through their normal late-winter and spring travel.

"There's not much we can do about wild birds injecting high-path avian influenza into a flock," Shea told state ag directors. "We can handle one injection at a time. What we are worried about, what came to be known in the early COVID days, is community spread. That's what we're worried about is farm-to-farm spread, and that's why biosecurity is so important because the easiest slip up can happen."

The 2015 HPAI outbreak was the largest and most expensive animal-disease outbreak in U.S. history. More than 7.4 million commercial turkeys and 43 million chickens had to be depopulated, including 33 million in Iowa, the country's largest egg-producing state. At least 21 states reported outbreaks, which also caused disruptions to poultry exports. USDA ended up spending about $950 million to respond to the outbreak, including indemnity payments to poultry producers. The industry learned a great deal and refocused on tighter biosecurity measures, but the industry could face similar risks now because of the ease in which the bird flu can spread from location to location.

"Sometimes there are slight differences to it, but it has the same kind of threat potential, for sure, from what we saw in 2015," Shea told DTN. "My message is the producers need to triple-down on biosecurity and do everything they can. If they get an inject from a wild bird, that we can stop it right there. Our goals are to stop community spread from farm to farm."

The key lesson learned in 2015 is the need to work quickly and improve biosecurity at the farm level. Reporting cases quickly also is critical to minimize the spread, Shea said. "I know it's sometimes an unsatisfying answer. We look for a better answer or a silver bullet. But it's really all about quick detection. Then we can quickly depopulate an infected premises."

Increased biosecurity means attention to detail and doing the little things such making sure people going in and out of barns wear slip-on covers over shoes, as well as making sure equipment is cleaned when it moves in and out of a location and moves from farm to farm. That's especially true for producers with multiple barns in one location or multiple farm operations.

"When people move from place to place, it's important that they don't bring anything from the other facility that could be infected," Shea said.

Producers need to watch for the signs of illness in birds and particularly increased mortality rates. A major red flag on a farm would be decreased water consumption by a flock.

"We need that quick reaction by producers to call their veterinarian and get those birds tested," Shea said. "So that's important."

USDA noted federal and state partners are working jointly to increase surveillance and testing in areas around the affected flocks. "The United States has the strongest AI surveillance program in the world, and USDA is working with its partners to actively look for the disease in commercial poultry operations, live bird markets and in migratory wild bird populations," USDA stated.

Once cases of HPAI are found in a barn, USDA will move to euthanize the flock as quickly as possible. If the circumstances warrant, that could lead to USDA ordering ventilation shutdown in barns, which means sealing up the building, causing temperatures and gases to rise to kill the flock. Shea called that a last resort scenario. "We prefer to make that a last resort, but the more dire the situation, the quicker the last resort comes to you." Going to a ventilation shutdown scenario "will undoubtedly lead to some in the animal-advocacy community and in the AVMA (American Veterinary Medical Association) and others talking to us. So that's why I put it that way, as a last resort. But dire times can cause you to go to the last resort a lot quicker."

USDA noted, according to the U.S. Centers for Disease Control and Prevention, avian influenza detections do not present an immediate public health concern. No human cases of these avian influenza viruses have been detected in the United States. As a reminder, the proper handling and cooking of poultry and eggs to an internal temperature of 165 F kills bacteria and viruses. 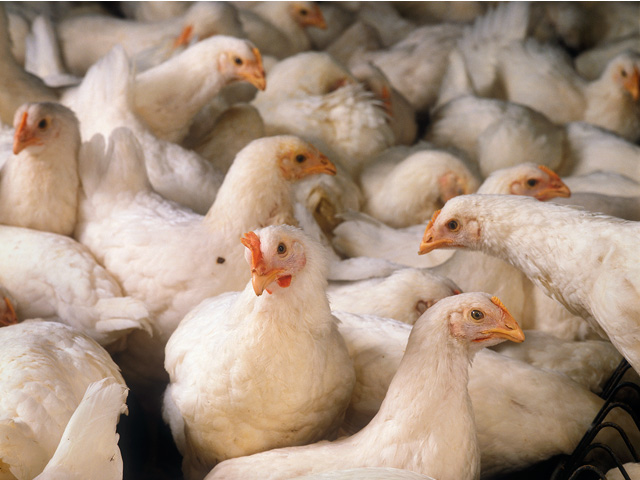