OMAHA (DTN) -- The great hope for the soybean trade is that China will have to come back to the U.S. for beans this fall when Brazil's stocks lower and the bumper U.S. crop is coming out of the field.

Instead, export terminals like those in the Pacific Northwest likely will see less rush this fall, but a slower, steadier flow of soybeans moving west as other countries turn to the U.S. for cheaper beans.

In our "Tariff Realities" series, DTN is looking this week at some of the harvest challenges facing farmers and grain elevators this fall marketing and storing soybeans due to the 25% retaliatory tariffs by China. Even as the trade dispute continues, the market has to absorb a projected record soybean crop of 4.69 billion bushels and larger-than-expected beginning stocks of 438 million bushels of old-crop beans.

October and November normally would be big months for shipping soybeans out of export terminals in the Pacific Northwest, but there are few export sales on the books this year even though old-crop soybeans out of Brazil are still trading at $2.50 above U.S. prices. Still, there are larger national pride issues at stake currently than the price of soybeans.

"When it comes to China, the message is very strong that this is bigger than the soybean crush industry, it is bigger than the feed industry, and it is in support of President Xi and this trade misunderstanding and trade war," said Emily French, managing director of the trading and strategies firm ConsiliAgra. "It's much bigger than soybeans."

She returned from China last week where she said the industry message was clear. The optics just wouldn't look good for a buyer to go ahead and order U.S. soybeans.

"The general feel is no one will take the risk to import U.S. soybeans right now," French said. "Even if they already have the export certificate, there's always the risk it could get rejected in port because of an SPS (sanitary or phytosanitary) issue, 1% FM (foreign matter), so on and so forth."

Feed in China could be tight from November through January, as China continues relying on Brazil and Argentina to fill its needs. But China is already planning on early harvested beans in Brazil, whose farmers are already ahead of planting schedule and expected to bump up soybean acreage nearly 2%.

U.S. soybean sellers have to find replacement buyers for China, a country that purchased roughly 36.2 million metric tons of U.S. soybeans in the 2016-17 crop year, accounting for 62% of all soybeans that left U.S. shores. Soybean exports to China fell nearly 24% to 27.6 mmt in the 2017-18 crop year that ended Aug. 31, but China still accounted for 49% of U.S. soybean exports.

Chinese exports started to die off in early April. China would typically buy 4.5 mmt to 5 mmt of beans from April to August, but bought just 1.5 mmt this year. After July 5 tariffs, buys fell off to just 200,500 metric tons.

In a typical year, Chinese buyers shift from South America to U.S. in the fall and start pulling in 5 mmt to 10 mmt of soybeans each month until March.

Jim Sutter, CEO of the U.S. Soybean Export Council, said what French heard in China was reiterated at the U.S. Soy Global Trade Exchange in late August in Kansas City, Missouri. A global Chinese buyer, Mu Yan Kui, vice chairman of Yihai Kerry -- a major Chinese food processor -- told the crowd that China would reduce soybean imports overall by as much as 14 mmt (514 million bushels) and also cut protein levels in feed rations while diversifying the oilseed mix with more buys of sunflower seed, rapeseed, peanuts and palm pulp from other Asian countries.

Also, at a private meeting between USSEC leaders and the entire Chinese delegation, Mu said Chinese businesses would like to buy U.S. beans, but the political situation prevents it.

"With the political situation, or the trade war, in place, he doesn't foresee they will be free to buy U.S. soybeans," Sutter said.

Yihai Kerry normally buys heavily from the Pacific Northwest, which will be the region with the most challenges this year because historically roughly three-quarters of soybean exports out of the PNW have gone to China. As of now, PNW terminal buys have dwindled in states such as North Dakota looking for ways to store soybeans.

Exports out of the PNW, though, are often lower in July to September but pick up dramatically in October and November. North Dakota has now become the classic example of where grain elevators aren't even offering bids right now.

"It's really challenging North Dakota grain handlers to hold these beans and not find a home, yet, elsewhere for them," said Simon Wilson, executive director of the North Dakota Trade Office. "What we do know right now is it has already been dramatically different than any year of the last two decades with soybean flows out of the state, and that's catching a lot of people looking for the best solution."

Everybody is looking to bin their beans and bag their corn if they can, said Joe Ericson, president of the North Dakota Soybean Growers Association. "It will be a whole new way to operate this year and we'll see how things go." Ericson added, "The elevators around here are built for moving grain, not storing it."

Sutter and others in the grain trade are concerned the lack of progress on the farm bill will end up tying up funding they often use to help keep trade offices going. The end of the farm bill left one particular program, Foreign Market Development, essentially frozen until a new farm bill is done. It's the smaller of the trade funding programs, but at $34.5 million a year, FMD helps pay for staff and offices overseas.

Trade programs such as those in the farm bill may help reach more deals such as the Taiwanese announcement this week to buy up to 3.9 mmt of soybeans from Iowa and Minnesota for 2018-19. Officials in both states took credit for the deal.

The Taiwan buy fits into the current mitigation strategy for soybean exports. USSEC and others are trying to encourage Asian countries, including Japan, South Korea and Vietnam, among others, to look at beans coming out of the PNW, especially because of the improved quality of the crop.

"I think it's not such a quality spread as it used to be, so we have been working with some of those countries," Sutter said. "Taiwan, who hasn't been buying beans out of the Pacific Northwest for 10 years, maybe more, has recently made several purchases out of the PNW. So, we need to see that happening, even though Taiwan's certainly not going to replace China, but if we put enough of those countries together over there, the markets do their thing. If markets get a little cheaper there, as it becomes a better value, more countries will start taking PNW beans."

Sutter also noted Argentina is both exporting soybeans to China, while importing U.S. beans to meet domestic demand. That could also happen with a larger share of Canada's domestic soybean crop in western provinces going to Asia while Canadian buyers bring in U.S. beans for domestic crush.

Tariffs affect not just commodity beans, but also organic, food-grade soybeans, which make up about 6% of production in North Dakota in the state, Wilson said. China traditionally is the largest market for those food-grade soybeans.

"We've been able to get over the shock value of those initial deliveries that were canceled and make up for those -- sometimes at a loss -- but going forward, the challenge is with the new crop coming off, and this next year, there's only so much demand, and where are the rest of the beans going to go?" Wilson said.

Canada also is a large grower of food-grade soybeans, and those growers appear ready to reap the rewards, Wilson said. If Canadian food-grade beans are going to China, that ideally will open up some other markets for the U.S. to step in, he said.

At the same time, people are concerned about what happens if China gets out of the rotation of buying U.S. beans once the trade dispute is resolved. China is sinking significant investment in South America, including in infrastructure there.

If this continues to linger, countries that have not been big markets for China will become big markets for China. While most of the attention also is focused on soybeans, other commodities such as dried distillers' grains and ethanol are also affected by the lack of Chinese market said Brian Schouvieller, senior vice president of ag business for Minnesota-based CHS Inc.

"Long term, we are concerned we could lose a share of our market," Schouvieller said.

Mike Steenhoek, executive director of the Soybean Transportation Coalition, always has an eye out for infrastructure improvements. He noted that the growth of exports out of the PNW in recent years led to billions in private and public investments to improve the flow of soybeans and other commodities to the PNW through shuttle-loading facilities, railroads, dredging the Columbia River to deeper depths and the building and expansion of several export terminals in the PNW.

That's partially why it's not so easy to just reverse the flow and start sending soybeans in another direction. "So many of these things were based on this growth of demand from China," Steenhoek said. "The argument that you have got a restriction in one direction, that you just pivot to another direction to sell, doesn't work."

With commodities in a pinch going west, Steenhoek said one of the ways the federal government can help farmers is to improve long-term competitiveness with targeted infrastructure investments.

He and others are advocating for the Army Corps of Engineers to dredge the lower Mississippi River to 50 feet, hitting a depth that would allow bigger Panamax ships to steer into the lower Mississippi. Doing so would translate into improved basis for interior states near the major export waterways. It wouldn't make up for all the lost exports, but it would improve basis for soybeans alone by more than $450 million a year, according to a Soy Transportation Coalition study.

"The closer you are to the river, the more efficient your supply chain is, the more narrow your basis is," Steenhoek said. "It is a specific investment the government can make that would have a specific benefit for farmers in the interior of the country."

This is the third story in DTN's Tariff Realities series.

The first story can be seen at https://www.dtnpf.com/…

The second story can be seen at 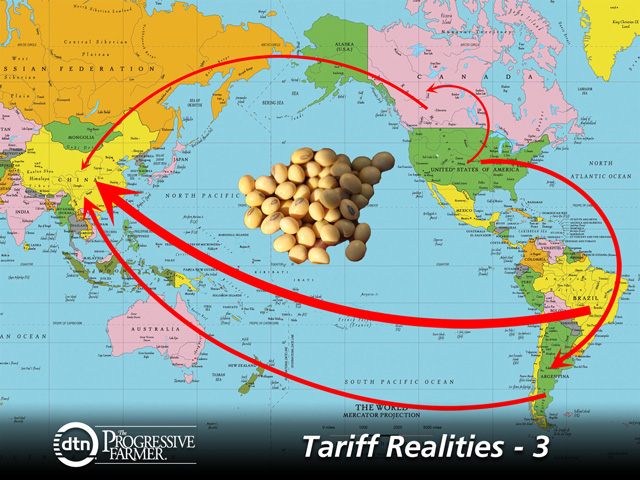