MOUNT JULIET, Tenn. (DTN) -- Justin Topp usually puts a portion of his soybean crop in storage every year, but with cash prices below $7 per bushel, he thinks this year will be the most he's ever stored.

"They'll be stored for a while I'm assuming," the Grace City, North Dakota, farmer told DTN from the cab of his combine.

China's 25% tariff on U.S. soybeans brought trade to a halt, forcing dramatic changes to the grain supply chain in the Northern Plains. Cash prices plummeted, and some elevators simply stopped offering bids for soybeans. Most are raising storage rates, and some warn they could run out of storage space for soybeans altogether.

Many farmers are selling corn straight off the combine to meet their cash flow needs and make room in storage for the bean crop, a dramatic reversal of typical harvest logistics.

Topp said that, for the past few years, soybean prices were the highest at harvest. Now, he's unsure when he'll be able to sell his beans without taking a loss.

Farmers who didn't pre-sell soybeans for harvest delivery and lack on-farm storage could find themselves with nowhere to go. Bankers worry the longer the tariff standoff lasts, the more farmers could go out of business.

October and November are usually busy months for grain elevators, with unit trains ferrying soybeans to the ports in the Pacific Northwest as soon as farmers bring them in.

"Well, this year it's just not going to happen because you don't have the Chinese demand. So we're going to back up all these soybeans in the country," Dusek said.

With few options on where to ship soybeans, storage will become a competitive issue. "Those rates have gone up this year just simply because the value of storage is greater than it has been in quite some time."

Most elevators will dedicate their covered, upright storage space to soybeans and use bunkers and ground piles for corn and wheat to manage quality.

"I think eventually there might be some elevators who say 'I would love to help you but I just can't. I don't have the physical storage,'" said Will Secor, an economist at CoBank's Knowledge Exchange group. "Without that Chinese demand, elevators don't really know where they're going to be shipping those soybeans, or how long they're going to have to hold them."

Many are considering arbitrage opportunities, like selling to soybean processors in other states or shipping soybeans by train to St. Louis to be loaded onto barges.

Dusek said elevators' biggest challenge will be to maintain enough space to handle all the corn and wheat that wants to come to market in place of soybeans.

"When harvest comes to completion, we want our facilities to be full," he said. "So we're kind of trying to thread the needle, in a sense, to be full but yet stay liquid enough to serve our owners and be able to get through this harvest."

Cash soybean prices in the Dakotas range from about $6.50 to $7.50 per bushel, with basis in some areas reaching $2 per bushel below futures prices.

In the beginning of July, Topp thought he had sold about a quarter of his bean crop for delivery at harvest, but now with lower yields, it looks like that will be more like 30 to 40%.

"This was a year where the producers that were aggressive in their forward pricing earlier in the spring are really going to turn out much better than folks that haven't done any pre-harvest marketing," said Nate Franzen, president of the agribusiness division at First Dakota National Bank. "The unfortunate thing is you look out and there's not a lot of options other than patience and trying to position yourself to wait and hope the market gives you something else, which is always a little bit stressful."

Franzen said he thinks more farms will use USDA's CCC marketing loans, even though the loan rates fall far short of the cost of production. Rates vary by county and range between $4.47 and $4.90 per bushel across North and South Dakota. (For more on the rising popularity of CCC loans, visit: https://www.dtnpf.com/…)

From a purely cash perspective, the 83-cent-per-bushel trade assistance payment will help offset some of soybeans' price challenges, but it's a short-term fix.

"It's a Band-Aid," Franzen said. "The producers we work with would much rather get it out of the market than have to get it from a government program or a disaster program, but it's certainly better than not getting anything at all. That's for sure."

In the meantime, the corn market is helping farmers meet their cash flow needs. Franzen said prices are lower than in spring, but about on par with last year.

The overall demand picture for corn is more positive than soybeans, said CHS Hedging Director Kent Beadle. Even with USDA calling for record yields, the carryout is expected to decline year over year. Global stocks-to-use are the tightest they've been since the early 1970s.

"We can make the case to the grower that with reasonable basis opportunities at harvest and the potential for decent board rallies post-harvest, on a seasonal basis, we might at least be able to take what's a not very good situation and be able to enhance what they ultimately receive for that crop," Beadle said.

Topp said he's planning to shift more acres to corn next year and has already made some sales. "We'll sell corn out to the future, and I guess hold these beans as long as we have to until price comes back around."

THE LONGER IT LASTS, THE DEEPER IT CUTS

From a banking perspective, Franzen said it's hard to say if the present situation in the Dakotas could translate into long-term financial problems.

"If the market opens up in the next six months and we can start marketing beans again at a reasonable price with reasonable basis, it's probably something that can be worked out," he said. But if the trade disputes drag on and the Chinese market doesn't open back up to U.S. soybeans, financial problems could escalate.

"It's challenging because carrying inventory comes with costs as well," Franzen said. "So, if the market doesn't give us an opportunity to sell, you've just compounded a problem because you've added additional cost."

Farmers are already worrying about 2019. If futures don't rebound, revenue protection on crop insurance could decline even as inputs become more expensive, he said.

Topp said anhydrous prices in his area increased $70 per ton in the last month. Cash rents aren't coming down either.

Franzen said farmers who didn't position themselves for tighter margins may need to consider deleveraging, "and that's hard in this environment because the asset that brings the most value and can give you the most bang for your buck is land. I think it's getting tighter and tighter, and more and more producers are going to have to make some of those tough decisions."

George Sinner has been a banker in North Dakota for 40 years, and while farmers have more liquidity and are in better shape overall than they were in the 1980s farm crisis, he's worried.

"There's not going to be anybody, I don't think, that really does well in this marketplace today, and depending on the extent of how long this thing goes on -- I think we could see a loss of some farmers, some auction sales next year," he said.

If there's one thing he learned from the 1980s, it's the pain didn't stop there. It hurts grain elevators, seed suppliers, implement dealers and a lot of other small-town businesses.

"I'm scared for some of the rural areas," he said. "You take out part of the businesses, and what's it do to the school district? Well, all that stuff's kind of a ripple effect."

He'd like to see Congress be more proactive this time around, perhaps by waiving or lowering fees on Small Business Administration loans and USDA's business and industry loans. He'd also like to see new programs to help farmers restructure, but acknowledges it takes a long time for those types of changes to happen.

"The outlook is gloomy and sometimes when the outlook is the most gloomy is when the light's about to shine through," Sinner said. "I guess we better all go to bed at night and say our prayers that something happens." 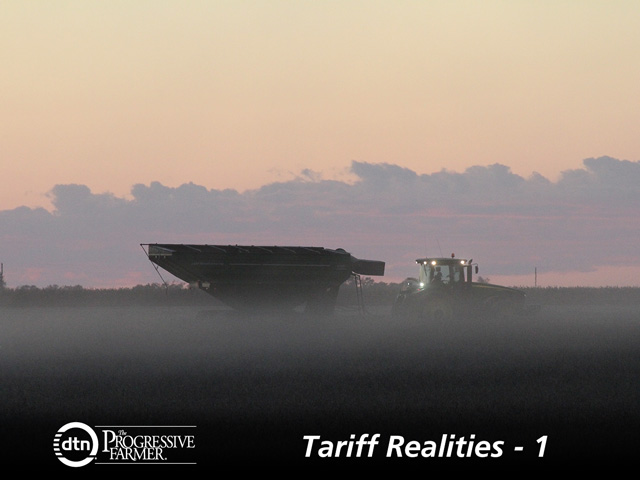