OMAHA (DTN) -- Farmers plan to put more soybeans in bins this year amid a record harvest and trade dispute with China, the U.S.'s largest soybean buyer, but storing soybeans comes with its own set of challenges.

Many farmers plan to utilize older, smaller grain bins to store their beans. Others are more comfortable storing corn. Experts say some practices apply to storing all grains correctly, while certain differences can present a learning curve in storing beans.

Farmers and grain elevators in some parts of the country are already carrying over more old-crop soybeans than normal. USDA reported Sept. 28 that soybean stocks on Sept. 1 stood at 438 million bushels, up 45% from a year ago.

Shane Stutzman, a grain bin dealer for Hynek Construction located in Friend, Nebraska, told DTN he would not be surprised if farmers decided to store more soybeans than usual this fall. With big corn and soybean crops on the way, he said it won't be unusual for farmers to use bins they may not typically fill in a normal year because they are small or not easy to clean out.

"They (soybeans) are generally pretty easy to store, and they don't have nearly as many bushels to store compared to corn," Stutzman said.

Stutzman said one thing farmers typically do incorrectly when storing soybeans is they put them in the bin and start the fan to cool them down without monitoring the relative humidity and temperature of the air. Stored beans absorb moisture and dry out much easier than corn, just like they do in the field, he said.

He gave a specific example of a 10,000-bushel bin with soybeans stored at 12% moisture. Using an over-drying net-loss formula, if the farmer runs the fan too long and dries the beans down to 9% moisture, this would end up costing $2,250 in shrink plus the expense to run the fan, he said.

In a post titled "Soybean Storage Tips" (https://crops.extension.iastate.edu/…), Iowa State University (ISU) Extension and Outreach said farmers should be careful when drying soybeans. Compared to corn, soybeans are fragile and can be damaged by air that is too hot or too dry and also can be damaged from rough handling.

ISU recommends reducing heat for soybeans by limiting air drying to 130 to 140 degrees Fahrenheit (F) for commercial beans and 100 to 110 F for seed beans.

If beans are too dry, either when they are put in the bin or if they are dried down too much, it is possible to rehydrate the crop by running the fans during warm, rainy weather, Stutzman said. The best time of the year to do that is during warm, rainy months, most likely from March until late May or early June in most of the Corn Belt.

He said producers need to try to cool soybeans when the relative humidity is between 65% and 80%. Running fans in over 80% humidity causes condensation in the bottom foot of the bin, which can cause the beans to crust and rot.

Stutzman said a fan controller or humidistat is important to the process of maintaining stored soybeans.

Stutzman also said green pods mixed in with stored grain can cause issues.

Farmers may want to harvest soybeans at 12% to 13% moisture so they can avoid shrink issues when they put them in the bin, but he said soybeans may contain quite a few green pods at that moisture. If the bin doesn't have a spreader, the pods tend to sift out of the beans and slide to the walls, where they quickly rot because of the high moisture content, he said.

"Rotting pods along the bin wall is very hard on bins, and they fall off in big clumps plugging sumps as the bins are unloaded," he said. "The best remedy is to use a grain spreader."

Stutzman said grain spreaders in new, larger grain bins are not very popular because they can slow the filling of the bin, but there are some spreaders that will handle 4,000 to 10,000 bushels per hour, he said.

Storing any grain requires producers to keep a watchful eye out for pests. The general rule is the longer grain is stored, the greater the chance of an infestation.

A post from Sept. 24 titled "How do I Manage Insects in my Stored Grains" (http://igrow.org/…) by South Dakota State University (SDSU) Extension Field Crop Entomologist Adam Varenhorst includes a section on the Seven Components to a Stored Grain Integrated Pest Management (IPM) Plan. These detailed strategies examine all issues with stored grain, from keeping all bins clean and in good repair to treating detected infestations when necessary.

DTN Entomologist Scott Williams said there are pests such as moths and beetles that will feed on all types of stored grain. Soybean-specific pests include various bean or seed weevils.

Williams said coring bins (removing grain along with some fines) will pull most of the fines out of the bins and limit pest feeding as the source of feed has been mostly removed. If producers do find pests, there are a range of options to control them.

The weather when the bin is being filled could also affect the condition of soybeans. DTN Senior Ag Meteorologist Bryce Anderson said weather conditions for fall harvest could see some back and forth in terms of temperatures and precipitation.

The 30-day forecast for October has a cool look to it with a good portion of the western Midwest in line for below-normal temperatures, he said. The rest of the Midwest has a near- to below-normal look on temperatures with precipitation looking near normal.

"Over the longer term, the 90-day forecast through the end of the year has a warm pattern with above-normal temperatures indicated," Anderson said. "Precipitation looks to be near normal except for the Southern states during the 90-day time frame."

This is the second story in DTN's Tariff Realities series. The first story can be seen at https://www.dtnpf.com/… 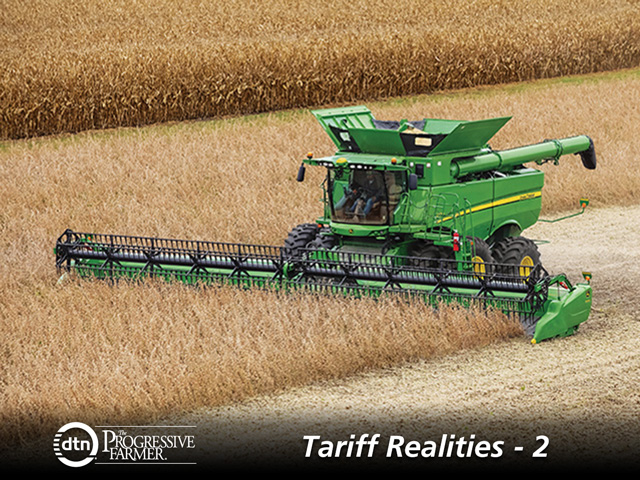