ANKENY, Iowa (DTN) -- The final day of the week-long DTN Digital Yield Tour, powered by Gro Intelligence, finds below-average corn yields in South Dakota and Minnesota due to heat and dry conditions. Soybeans fared better in both states, projected to yield at or near USDA's five-year averages.

On Friday, Aug. 12, Gro's yield models estimate South Dakota corn at 128.9 bushels per acre (bpa), on average. That's more than 20 bpa under USDA's five-year average. If Gro's projection is realized, it would be the lowest corn yield in the state since 2012 when the average was 101 bpa, according to USDA.

South Dakota soybeans are projected to average 42.8 bpa, according to Gro. That's only 0.5 bpa under the five-year average.

Despite a promising start soil moisture-wise to the growing season in the upper Midwest, levels declined since July, and that hurt corn yields.

"That matches what our yields have done as well," said Mintak Joo, Gro Intelligence senior analyst. "A little over a month ago, our yields for South Dakota were like in the 140-ish range (bpa). There's been a steady downward trend in the last 30 days."

Cooler temperatures and rain are in the forecast through the end of the month, which is expected to help soybeans, Gro officials said. "I think this is similar to what we've talked about with soybeans ... the ability in August to improve the crop," Gro Intelligence Senior Analyst Jon Haines said, explaining why the company's yield models show promising soybean yield potential in South Dakota and Minnesota.

One of the key components of Gro Intelligence's yield models is the normalized difference vegetation index, more commonly referred to as the NDVI, which measures the color of a crop from satellites and compares it to more than 20 years of historical data. Generally, a greener map reflects a healthier crop. You can see the NDVI map for South Dakota at https://app.gro-intelligence.com/…. Find Minnesota here: https://app.gro-intelligence.com/….

There are pockets in both states that experienced favorable growing conditions. In South Dakota, that occurred in the north-central and northeast, according to Gro's NDVI maps. The Red River Valley in Minnesota stood out on NDVI imagery. However, the good areas weren't enough to overcome large, dry areas that curtailed corn development in both states.

"I think Gro has done a remarkable job of giving us a much more detailed look at this year's corn and soybean crops," Hultman said, adding that USDA's Crop Progress reports give us a broad image or perception, but they're just one piece of data that goes into Gro's model.

"When Gro takes it under the microscope, we see a much more detailed picture of problems and crop stress, not only from state to state, but within the states," he continued.

"To have this kind of insight on every county in a growing area, I think it's just unparalleled and gives us a much richer, more meaningful view of what's happening in the country right now. It has definitely changed my view on yield expectations this year."

DTN will follow up with the analysts at Gro next month to see how their corn and soybean yield estimates change over time.

"There's a little nice pocket that's doing pretty well in north-central South Dakota. So, we've got some green and better-than-normal yields there. The whole northeastern region is better off than the rest of the state," Haines said. "But most of the state is having a real tough time with drought."

Joo added, "If you look at daily soil moisture (data for South Dakota), it's similar to other states. It had some rain in early July, but since then, soil moisture has basically been at the bottom of that historical range."

-- For the most part, rainfall has not been very kind to the state, DTN Ag Meteorologist John Baranick said. When it has come, it has been isolated.

"We haven't seen the large thunderstorm complexes moving through the state as often this summer," he continued. "Heat has also been a big factor as well. It might not have been as hot as some of the other states, or for as long, but when you add in the lack of precipitation, the two have combined for some poorer crop conditions, especially toward Nebraska where drought has been the deepest."

Two derechos, which resemble inland hurricanes, moved through the upper Midwest this year. The first was in early May, and nearly no fields were yet planted. The second derecho moved through South Dakota and into Iowa on July 5.

"With the crop being pretty short, it luckily just added rainfall to the soil column instead of blowing down well-developed crops," Baranick said. "A couple of wind reports over 90 mph were recorded in South Dakota with that windstorm."

-- Scott Stahl farms in western McCook County near Bridgewater. He said the growing season started great. Corn and soybeans got planted in a timely manner, which means starting in late April and finishing in mid-May. Emergence and stand counts were good.

"We were able to get a few spring rains in May that helped everything get going and fertilizer and herbicide activated," Stahl said. "We had everything that the crop needed."

Then, excessive heat and dry conditions in July and early August, coupled with limited soil moisture, doomed Stahl's crops. "As corn and soybeans moved into their reproductive cycles, that was a devastating combination," he continued.

When asked last week to describe current crop conditions and yield potential, he responded: "I'm going to try not to get emotional; I try to be optimistic. But it's devastating. We are about 180 (bpa) annual production history on corn and in the upper 50s (bpa) for soybeans. This year we're going to be well under half that. I would say we're looking at a 50-bushel-per-acre corn crop, and beans are maybe in the 20s (bpa)."

-- While Minnesota yields are below average, they've moved in a more consistent range around 170 bpa, Joo said. That's unique to this year's tour, where many states, like South Dakota and Kansas, have seen yield prospects drop precipitously.

Haines said Minnesota's NDVI is in the middle of the state's historical range going back to 2000. "Unlike some of the other states where we're particularly low, this one is kind of in the middle," he said.

Heat in June and July kept a lid on yield potential in most places, but there are some pockets doing better than average up in the Red River Valley and in southeast Minnesota.

But as far as this year goes, "Minnesota basically lines up as normal -- whatever you want to call normal," Joo said. The state's yield average matches the five-year average.

Baranick said the wet spring set soil moisture up for a good start across the north, but it was less wet across the south.

"During June, the southern half of the state got pretty dry, and flash drought built into the region," he said. It got hot like in South Dakota, but it didn't last as long. "Some rains have picked up there recently, but the heat and dryness earlier in the season likely had a significant impact on yields.

"The northwest corner of the state extending through North Dakota is somewhat of the darling of the crop conditions this season. Sure, planting was well behind normal because of a cold and very wet spring, but the moisture has stuck around all summer. Several systems that have gone through Canada reached down into these areas. The heat has also been very infrequent. There have been a lot more days with highs in the 70s and 80s and only a few days in the 90s -- especially when you compare it to last year. Such an incredible turnaround in conditions from a year ago."

Rains in southern Minnesota this past weekend "likely helped out soybeans more than corn, a potential reason that soybean yields are at the average while corn yields are behind."

For more on the DTN Digital Yield Tour, please read: 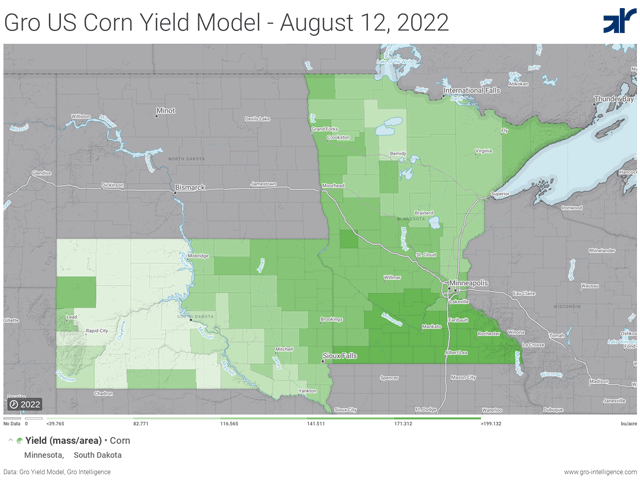