On Thursday, Aug. 11, Gro's yield models estimate Kansas corn at 118.5 bushels per acre (bpa), on average. That's nearly 15 bpa under USDA's five-year average. If Gro's projection is realized, it would be the lowest yield in the state since 2012 when the average was 95 bpa, according to USDA data.

Kansas soybeans are projected to average 34.8 bpa, according to Gro. That's nearly 6 bpa under the five-year average. If realized, like corn, it would be the lowest yield in the state since 2012 when the average was 23 bpa.

Gro Intelligence projects Missouri corn yields at 142.8 bpa, which is more than 16 bpa below the five-year average compiled by the USDA and 11% lower than last year. The state's soybean yields, according to Gro models, are estimated at 44.8 bpa, which is 3.2 bpa less than normal and 9% worse than last year. If Gro's estimates for both crops are realized, it would be the state's lowest yields in five years.

Gro Intelligence Senior Analyst Will Osnato said high temperatures and low soil moisture the past 2.5 months has greatly reduced yield potential in both states. However, there's more hope yields could increase yet in Missouri than in Kansas, based on recent weather and yield trends. He said yield estimates have climbed 4 bpa for corn and almost 5 bpa for soybeans in Missouri during the past week due to cooler temperatures and the possibility that rain could still help the crops.

"I think the trajectories might be different for these two states," Osnato said. "Kansas has been trending worse into the season with high levels of drought. It only got a slight relief (with a little rain recently), but it is trending in the wrong direction. Missouri has some better pockets, and overall conditions are closer to normal. It's been a little bit better recently with the cooler temps, both realized and forecasted."

DTN Ag Meteorologist John Baranick said rain is forecast in the near term in Missouri, including the southwest corner that's been hit hard by drought, which could help crops.

"The southwest corner is more likely than anywhere else (to get rain), and that's according to the European (forecast) model," Baranick said. "The GFS (Global Forecast System) kind of has it (rain) a little bit more widespread across the state and lighter. So, there's a lot of variability in the forecast right now."

One of the key components of Gro's yield models is the normalized difference vegetation index, more commonly referred to as the NDVI, which measures the color of a crop from satellites and compares it to more than 20 years of historical data. Generally, a greener map reflects a healthier crop. You can see the NDVI map for Kansas and Missouri here: https://app.gro-intelligence.com/….

-- Osnato said the weather will curtail yields in Missouri, especially the southwest corner. The NDVI map, soil moisture and temperature all point to crop production being down this year, in some regions drastically.

"In the bad areas, like in the southwest, the (yield) forecast is down like 30% to 50% from last year. Almost all (the region) has sub-100 (bushel-per-acre) yields for corn there instead of being in the 130- to 160-(bpa) range last year," he continued. "In the north, it's usually pretty strong with yields in the 180s and 190s last year, so you're taking a little off of the best areas this year."

Corn yields in the northern one-third of Missouri counties, according to current Gro estimates, range from 115 bpa to nearly 180 bpa.

For soybeans, if temperatures remain normal with high in the mid-80s and some rain falls, Gro analysts think soybean yields could increase.

-- Missouri and Kansas had a lot of the similar climatic conditions, but Missouri is not nearly as bad, said Baranick. Missouri's southwestern quadrant started to see drought building over the summer, and triple-digit temperatures at the same time really burned this section.

"Rainfall has been better across the north, and there have even been some heavy precipitation events. There was an event around St. Louis that produced nearly a foot of rain in a small section, but moderate rainfall in other spots," Baranick continued. "The Bootheel area started with great soil moisture this spring but saw it dwindle this summer. They've been getting better showers recently, though, and that likely has kept this part from getting too bad."

-- Clint Stephens farms with family in the Bootheel of Missouri near Advance. The Stephens planted roughly 4,000 acres of corn and soybeans, split equally.

Crops started going in the ground in mid-March, but persistent rain didn't allow planting to wrap up until early June. As a result, crop progress is highly variable.

The good spring rains that delayed planting and got crops off to a good start, though, dried up in June and July, Stephens said. Even though 95% of his corn and soybean acres are irrigated, the lack of rain hurt corners where the pivots don't reach. Prolonged temperatures in the mid- to high-90s Fahrenheit and low 100s also took a toll on crops during the reproductive phase.

He said corn yields are typically 180 to 210 bpa. Soybeans usually yield in the 60-plus bushels per acre. Optimistically, Stephens is hoping for per-acre corn yields in the 160s this year. He expects harvest to start on early planted corn at the end of August.

Stephens said it's too early to predict how soybeans will yield since pods are just beginning to develop in many fields. "There's areas of fields that look pretty rough."

-- If Gro's 118.5 bpa estimate is realized, it'd be the lowest since the drought of 2012, Joo said. Gro's soybean estimate is 6 bpa below USDA's five-year average. "It's comparable to corn, especially when comparing to last year. We would be down by close to 15%, and then for beans, we'd be down 12%."

Osnato said drought in southeastern, north-central and northwest Kansas is driving yield estimates substantially below average. Largely irrigated counties, despite boasting some of the state's best yield potential, are suffering a yield impact from this year's drought too.

Gro's yield model for Kansas has been trending down over the past week as the forecast grew hotter and drier.

-- Drought has been a constant in Kansas this season, but so has the heat, Baranick said.

"Days above 100 F have been well above normal, especially when you include the forecast going into next week, that should add a couple more. The northeast quadrant of the state has had a bit more rainfall, and that has contributed to some better-looking corn on the NDVI map, but yields are still down, I think, largely due to the extensive heat," he added.

Baranick said the GFS, or American, weather model shows primarily hot and dry weather over the next week. The European model shows more rain potential. "So, there are battling forecasts, but we all know it's been really hot and dry there all summer long. It's not surprising the numbers are well below average."

DTN Lead Analyst Todd Hultman said it was expected that Kansas' yield estimate would come in on the low side.

"I think traders tend to ignore Kansas. They don't see it as a major player, but the reality is, they've been increasing their corn acres," he said. In 2021, for example, Kansas harvested 5.4 million acres of corn for grain. That's more than Indiana and Ohio.

"They've transitioned a lot of wheat land to corn land in the past several years, so this low yield is a bigger factor than probably most expect," Hultman said. 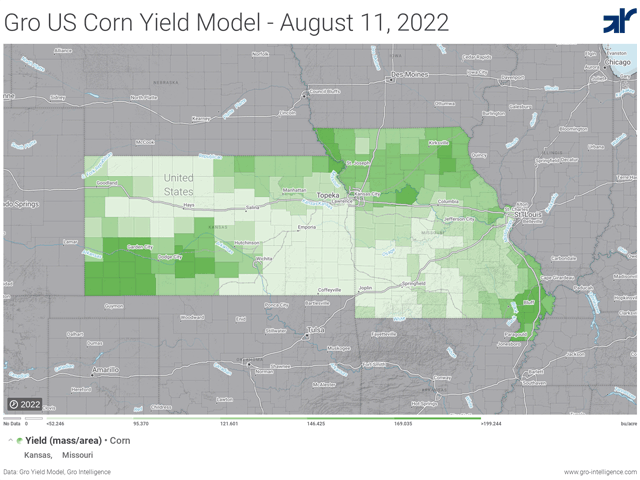