ROCKVILLE, Md. (DTN) -- With corn and soybean planting starting to fall behind the five-year average, some farmers may be considering pushing the planting envelope.

"It's late enough that people are getting nervous," said Lance Tarochione, a DeKalb technical agronomist who covers northwest Illinois. "It's still early, but it is starting to feel like one of those springs where if you wait for everything to be perfect, you'll be waiting forever."

In the Northern Plains, growers now have piles of snow just starting to melt, noted DTN Ag Meteorologist John Baranick. And, with the exception of Iowa and southern Wisconsin, most fields east of the Plains are pretty wet.

The result? Some farmers are almost certain to succumb to nerves and time pressure and plant into soils that are colder and wetter than ideal, Tarochione said. Those looking to avoid planter's remorse would do well to consider the following four tips, he said: Look at long-term forecasts, consider planting soybeans first, pick your earliest fields carefully and remember planting date is only one of many factors affecting yield.

LOOK BEYOND THE THREE-DAY FORECAST

Hard as it is to wait, the weather forecast isn't likely to cooperate with planting plans in the next week or two for many growers, said Baranick.

"Cold conditions keep moving through the country, making it difficult for soils to warm up consistently," he said. Temperatures are set to rise at the end of this week, but don't be fooled.

"Another system will bring widespread showers to the country this weekend into early next week, including potential blizzard conditions in the Northern Plains yet again and renewed wetness from the southeastern Plains through the Midwest," Baranick warned. "Cold air filtering in behind that system will not be as cold as we are seeing this week, but still well enough below normal for soil temperatures to either stall out or decrease a bit again."

Excessive soil moisture is as big of a concern as soil temperature, especially in the Eastern Corn Belt, added Tarochione. "Wet soils tend to be a problem, whether they are warm or cold," he said. "If it stays dry, a seed can withstand a lot of cold and be fine. To me, moisture is the bigger boogeyman."

To see more on the risks of seeds taking in cold water and experiencing imbibitional chilling, see this DTN story here: https://www.dtnpf.com/….

Seed treatments can help with early season risks from insects and diseases, but if a seed is sitting in cold, wet soils for three weeks, even those defenses might not save you, he noted.

Don't count on your planter to bail you out all the time, either. Planter attachments can help with the risk of sidewall compaction, seed furrows splitting back open and poor seed-to-soil contact, Tarochione noted. "But there is no replacement for good soil conditions -- at some point, if soils are too marginal, none of that will save you," he said.

As operations and planters get bigger and more efficient, an ill-considered planting date can set an operation further back than ever before, Tarochione added: "When you're running three 24-row planters, you can screw up a lot of stuff in a hurry on a single bad day to plant!"

The conventional wisdom on which crop to plant first -- corn or soybeans -- has undergone a major reversal in the past decade. "It turns out soybeans are actually the tougher crop when it comes to early planting," Tarochione said.

While corn yield potential relies heavily on fast, uniform emergence, soybeans can handle a sloppier start, he pointed out. Early planting field trials from across the industry have shown soybean seeds can better tolerate cold and saturated soil conditions, and the soybean plant can compensate for uneven emergence and diminished stands without necessarily losing yield potential.

That comes with two big caveats, though. First, early planted soybeans are much more likely to need the protection of fungicide and insecticide seed treatments, Tarochione warned. Growers who opt for naked soybean seeds should not push the early planting envelope.

Second, anatomy matters. Corn keeps its all-important growing point coyly tucked away inside its stem and underground during its early growth stages. In contrast, soybeans rather recklessly thrust their growing point up into the air almost immediately after emergence.

If temperatures plummet below 28 degrees Fahrenheit for too long, this can doom early planted beans, Tarochione said. He estimated that one or two years out of 10, early planted soybeans might have to be replanted, a risk mitigated by the industry's practice of offering free replant for fully treated beans.

Some fields will handle a cold start to the season better than others.

"Drainage is my No. 1 requirement," Tarochione said. "Only push planting dates on your best, naturally draining field."

And as much as he advocates for no-till and cover crops, tilled fields are far more likely to be warmer and drier and safer for early planting, he added.

Finally, remember that planting date is just one of many factors affecting final yield. "During the spring, we get so wrapped up in timely planting that we forget it's just one -- and sometimes a minor -- factor in how the crop turns out," Tarochione cautioned.

And while the data is growing to support the idea that soybeans do start to reliably lose maximum yield potential as you enter May, the same is not true of corn.

Even with soybeans, an early planting date only gives them a yield boost if they emerge equally early to take advantage of the longer growing season. "If you plant beans on April 15 and May 1 and they both emerge on May 7, they will yield the same," as Tarochione pointed out.

"It's true that at some point, calendar date starts looming pretty large," he added. But as of April 20, "It's too early to be doing anything stupid!"

See more on risks from planting into cold, wet soils for corn and soybean from DTN here: https://www.dtnpf.com/…. 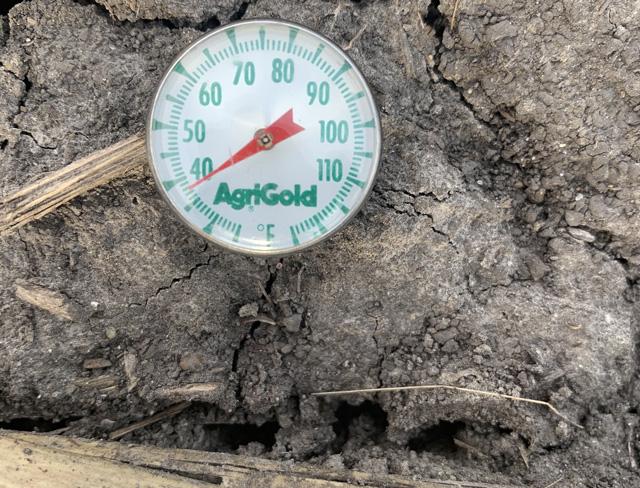