This is the optimal period for planting to begin across the southern half of the United States. From the South to the middle of the Midwest, planters are usually out in full force. Anecdotal reports of antsy farmers wanting to get out into their fields to plant are rising. Increased soil moisture has already led to some delays. (See https://www.dtnpf.com/….)

But soils have also been slow to warm up into their optimal range for corn planting. Air temperatures had been increasing and were above normal in the Eastern Corn Belt, Delta and Southeast for much of March through early April. But that has not always translated to soils warm enough for germination.

After a cold front went through the Corn Belt on April 13, falling air temperatures have reversed the trend of increasing soil temperatures and have largely kept them below 50 degrees Fahrenheit after a brief shot upward last week.

Air temperatures are one part of the equation for forecasting soil temperature fluctuations, but so is soil moisture.

That is partly because wetter soils take longer to warm up across the Eastern Corn Belt. Water has a higher heat capacity than soil particles. This is easy to imagine if you think about a nice sunny day. If you sit next to a pond and a rock, which one is going to be warmer in the afternoon? You might burn your bottom sitting on that rock, but the pond will feel much cooler. That is an oversimplification but illustrates the point. The same is true for soils. Wetter soils need more energy to increase temperature than drier soils. The energy that goes into the soils is partly used to raise the temperatures but also works to evaporate water out of the soil.

And those wet soils are in abundance across the Eastern Corn Belt, Delta and parts of the Southeast. Rain last week only exacerbated the issues.

While average soil temperatures have briefly come up to the optimal range due to some higher air temperatures early last week, the trend is certainly downward and below the 50-degree-F benchmark since a cold front moved through on April 13. With temperatures rising for the next few days, soils should warm up, but more cold air is on its way. Producers may hold off even longer to plant their corn.

Colder soils lead to uneven growth in plants and can increase risks for disease. Farmers are keen to this fact, so planting in colder soils is usually avoided. According to the Iowa State University Extension (see https://crops.extension.iastate.edu/…), planting in cold soils "opens up opportunities for insects and pathogens to attack seeds resulting in poor emergence especially if poor seedbed conditions are prolonged."

So, long periods of colder conditions are also a situation to avoid. With the forecast of colder weather settling into much of the country next week, anticipate spring planting progress to fall behind the normal pace.

Of course, the soil temperature situation is even worse farther north in the Northern Plains. Folks wanting to plant early to take advantage of some better soil moisture this spring with a summer that is forecast to be hot and dry will have to wait. The blizzard in North Dakota last week and parts of the Prairies is certainly going to keep planters out of the field for some time. And when the snow finally melts off, wetter soils will still be slower to warm up.

In addition to the soil temperature issue, soil moisture may yet be another reason that planting is delayed, either with too much or too little depending on location in the country. 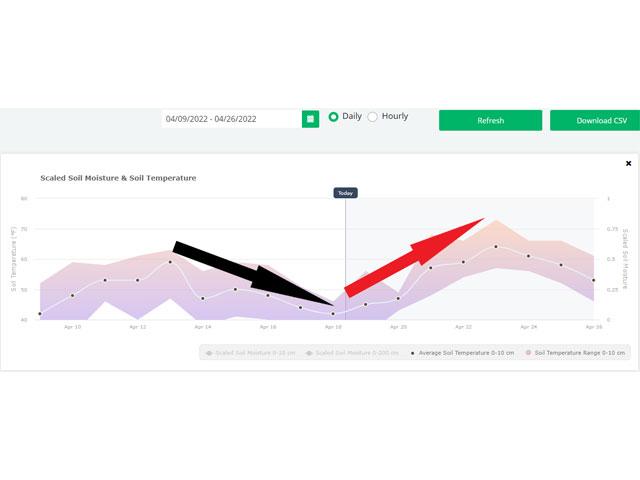