As a sales agronomist for his family seed and consulting business in Thomasboro, Illinois, Ehler Bros., he is fond of reminding grower-customers that he has boosted average soybean yields on his test plots by nearly 9 bushels per acre over six years by planting in April instead of May.

But even Ehler has his limits.

"Soil temperature is the No. 1 determining factor for planting from March 20 through May 15," he said. "And right now, soil temperatures are saying don't plant."

"We've seen a lot of temperature values running around 20 degrees below normal," he said of the Corn and Soybean Belts. "Then you factor in the snow that fell in the northern Midwest over Easter weekend and continued snow in portions of the Midwest this week, and the summation is unfavorable for a quick rebound in soil temperatures."

The drastic delays from wet weather in 2019 have a lot of farmers spooked, Ehler said. They see soil conditions that are dry enough to support equipment and want to jumpstart planting to stay ahead of inevitable spring rains.

"A lot of this goes back to the memories of 2019, and the upcoming forecast," he said. "A handful of growers are ignoring soil temperatures and basing planting decisions on soil conditions alone. That scares me because it's just asking for imbibitional chilling."

Imbibitional chilling occurs when corn or soybean seedlings get their first taste of moisture in the ground. Seeds are programmed to take in water as soon as they have access to it, Ehler explained. "It's not a choice," he said. "When you put a seed in a damp environment, it automatically starts drawing moisture in."

Specifically, corn kernels need to take in about 30% of their weight in water before they can germinate, and soybeans need to absorb close to 50%, Purdue University corn agronomist Bob Nielsen explains in this university guide to germination: https://www.agry.purdue.edu/….

This water absorption happens quickly -- usually within 12 to 24 hours for a soybean seed and 24 to 48 hours for a corn seed.

Soybean seeds can experience chilling injury from water below 50 degrees, and the seed can die from imbibing water at 40 degrees or lower, according to research from University of Nebraska crop scientists, summarized here: https://cropwatch.unl.edu/….

For corn, chilling injury is likely when the seed absorbs water in the low-40s, and water colder than 40 degrees is almost certain to rupture and damage the cell membranes of the seed, the Nebraska scientists explained.

(For more details on how to diagnose frost and imbibitional chilling injury on corn and soybean seedlings, see this Iowa State University article: https://crops.extension.iastate.edu/….)

Once the initial period of water absorption is achieved, corn and soybean seeds are generally safer and more tolerant of cold soils, Ehler noted.

But other threats remain.

Cold soils can slow emergence and development, leaving the seedling vulnerable to a host of opportunistic insects and soil diseases, he noted.

And because cold soil puts the brakes on a seedling's metabolism, it can also leave plants vulnerable to damage from pre-emergence herbicides on the soil, Ehler added.

"Basically, you're putting multiple stresses against a seedling right away, and that is just not a good recipe for emergence," he said.

Growers may need rapid and even emergence more than ever this year, as replant options for some seed may be scarce, he added. New soybean herbicide-tolerant platforms like Enlist E3 are still in the process of scaling up production, which means growers will not necessarily have access to the first or even second choice if they require substantial replant seed, he stressed.

"If there is no supply left in a replant situation, some growers may have to switch [herbicide-tolerant] platforms entirely," he pointed out. "And that's a concern since many growers chose their seed based on what chemicals they could use for weed control."

For now, Ehler is urging his Illinois growers to watch soil temperatures and wait for stretches of rising temperatures before planting corn or soybean seeds -- and to remember that soil temperature and conditions will continue to eclipse calendar concerns for many weeks to come.

And keep an eye on that long-term forecast, because cool temperatures aren't leaving the picture anytime soon, DTN's Anderson said.

"As far as the rest of the spring is concerned, I think we are likely to see stretches of cool temperatures and showers well into May," he said. "It will not take much for rain occurrences to form, given that the soil [moisture] profile is high over almost the entire central U.S." 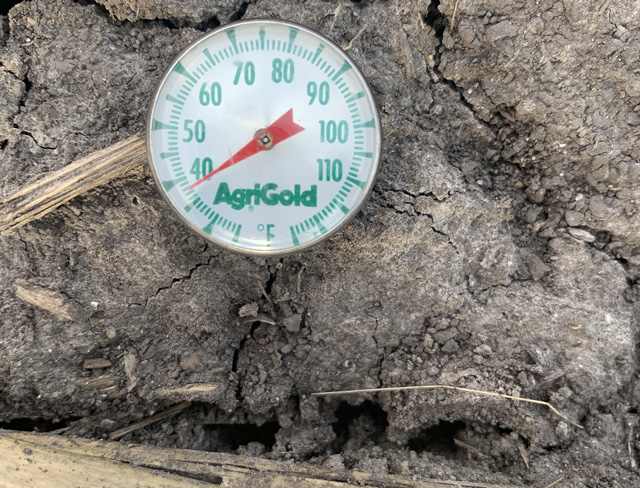