ROCKVILLE, Md. (DTN) -- If you ever needed evidence that life isn't fair, the radar maps from the storm systems that have moved across the country this past week should suffice.

For some, the blasts of wind-driven rain were a well-timed tonic, refilling parched topsoils and giving heat-stressed crops a break. But for those who missed out, the closing weeks of June have deepened the divide between the have and have-nots, at a critical time for crop development.

That contrast played out repeatedly as DTN Farm Advisers across the country updated DTN via email on their weather, crops and concerns this month. Over two-thirds were enjoying adequate -- even plentiful -- moisture, as northern and westernmost growers endured deepening drought.

"It's been very disheartening to see our crops burning up and the markets falling due to the rains in other places," said Dan Lakey, a southeast Idaho farmer whose region has seen only two inches of rain since April. "It's not a good situation but I've been trying not to let it get me down."

No one is more aware of the capricious blessings of Mother Nature this season than drought-hardened farmers in the Southern Plains, where things are looking uncharacteristically lush this summer.

Oklahoma Panhandle farmer Kenneth Rose was astonished to watch five inches of rain in May rescue his winter wheat crop, after a dry spring and hard March freeze. "Wheat harvest will be late this year due to late green growth after the rains, but I'm expecting average yields," he marveled. Likewise, in the Texas Panhandle, Mike Lass is reveling in recent rains, which have moved his area out of drought conditions for now. "Cows are belly deep in grass for now, and I've got my fingers crossed for continued moisture!" he wrote.

"We were starting to get really dry until the weekend of Father's Day," north-central Missouri farmer Kyle Samp explained. But, as many experienced this past weekend, the two big rains Samp caught also came with some impressive winds. "It looks like we'll have some goosenecked corn to contend with at harvest," he said.

See more on that storm front and wind damage from DTN here: https://www.dtnpf.com/…

Farmers from Indiana, Maryland and even southern Michigan -- which is still contending with drought conditions -- also reported catching timely rains in the past week or two.

The radar has been unkind to Ashley Andersen's family in eastern Nebraska. "Man, it has been miserably hot and dry, so dry," she reported. "We seem to have a circle around where we live." Corn there is rolling, and soybeans paused their growth to wait for rain.

The hot, dry trend persists up through the Canadian Prairies, said Alberta, Canada farmer John Kowalchuk, who is watching extreme heat dissipate his adequate moisture recently. "It is drying up quickly and things are burning a bit," he said.

Things are even more dire in southeast Idaho, where Lakey is seeing crop conditions decline rapidly. "It's common for us to start to burn on drier years in July, but I've never seen it go south the first part of June like it has," he said. Wheat and barley are taking it the hardest, while irrigation has kept his yellow peas and mustard going, and flax is hanging on.

Drought has mostly deepened in the Northern Plains in the last month, as well. In southern Minnesota, where Mark Nowak's farm has received 28% of its normal precipitation since April, heat is adding insult to injury. "We've already had 11 days of 90 degrees or higher this growing season -- that is more than any total for an entire season over the last five years," Nowak reported. His corn is rolling, and subsoil moisture is shrinking. "Right now, my most important farm asset is our crop insurance policy," he said.

See more on drought effects on corn and soybeans from DTN here: https://www.dtnpf.com/…

Corn development was moving along briskly for DTN Farm Advisers, thanks to plenty of recent heat units. Growth stages ranged anywhere from V3 in Canada to silking in Arkansas. Soybean development was even more varied, with some farmers, such as Missouri's Samp watching twice-replanted soybeans try to catch up, while soybeans were flowering in southern Indiana.

As growers finish up post-emergence herbicide applications and weigh fungicide and insecticide needs, some noted that lags in the agricultural supply chain are still a problem. In east-central Illinois, Reid Thompson was "glad I started hunting early" for sulfur, which he had trouble getting to his farm. And now, after spraying his first pass of Liberty, he discovered that prices had doubled for any second applications to clean up escapes. "Our biggest concern is waterhemp that didn't die all the way," he said.

Local retailers seem to be constantly out of multiple products, added Genny Haun, in northwestern Ohio. "We are already buying both liquid and dry fertilizer products for next year -- prices are skyrocketing," she said. Meanwhile, glyphosate costs have risen 30% for Dan Petker in Ontario since May, and neighbors are talking of tight fungicide supplies.

Most of the farm advisers ranked weather -- namely, rainfall chances -- and markets as their top concerns for the weeks ahead. In particular, the volatility in crop prices has taken its toll on many farmers' marketing plans and sanity.

"How do you make a decision when corn is down 40 cents one day, up 36 cents the next?" southwestern Indiana farmer Scott Wallis vented. "Same for beans -- down 90 cents, then up 60."

Several farm advisers were hopefully anticipating that midsummer respite that sometimes occurs when in-crop applications are done, and cereal harvests are still a few weeks away.

Alberta's Kowalchuk is hoping to sneak in a little camping before it's time to head back into the field for fungicide applications. And in southern Ontario, Petker calls it his favorite time of year, when fieldwork wraps up for a couple weeks before wheat harvest. "We get too busy and focused on raising the crops that we forget we need to nurture the relationships with those we love," he said.

Mental health was top of mind for Idaho's Lakey, as well, who is still grappling with the sudden death of his father and farm patriarch this winter, on top of the drought conditions ruining his crops' potential.

"I think we as farmers need to do a much better job on the mental health aspect of farming," he reflected. "We do an awesome job at growing crops, but seldom do we focus on our mental health. I've been focusing a lot on how I react to disappointment, which in farming happens a lot. Disappointment is unavoidable in agriculture, and I believe how we discipline ourselves to react to it will determine if we'll be successful or not."

See where the DTN Farm Advisers were last year at this time: https://www.dtnpf.com/… 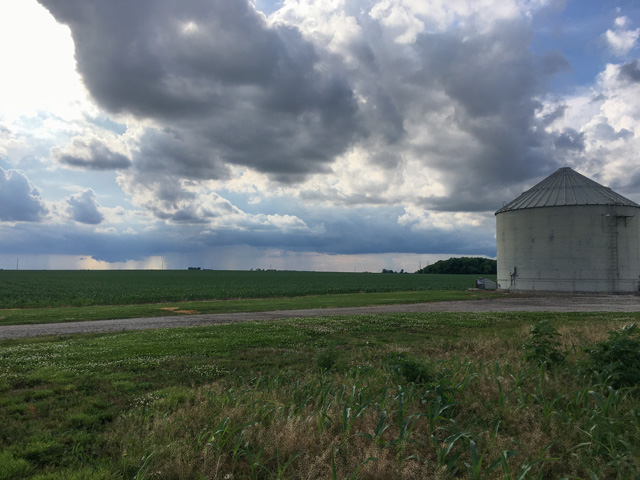