But by golly, cereal crops were happy.

"It has been fantastic for winter cereals!" Dan Petker, a farmer from Ontario, Canada, enthused. "There are some phenomenal-looking wheat and cereal rye crops around us." That was the conclusion of the Hard Winter Wheat Tour, as well, which found the crop exceeding yield expectations throughout Kansas this past week, thanks in part to the timely moisture and moderate temperatures that have been less ideal for the emergence of spring crops. (See more of DTN's coverage of the wheat tour here: https://www.dtnpf.com/….)

Now it's those spring crops' turn to shine, Petker said.

"We're hoping to finish corn by the May long weekend, something we have never done before," he remarked. "Daily and -- just as important -- nightly temperatures are starting to rise, after what was a cold, windy first 10 days of the month."

Petker's experience -- a rapid planting pace despite cool and wet conditions -- was a common one among DTN's Farm Advisers, a group of trusted farmers and ranchers who update DTN every month via email about their farming operations. This month, farmers in the central and eastern Corn Belt, the Southeast, Mid-South and even the recently parched Southern Plains reported adequate or even plentiful moisture, and a welcome rise in temperatures this week, after an unseasonably cool start to May.

"The first half of May had an upper air pattern that certainly was unfavorable for spring farm work," DTN Senior Ag Meteorologist Bryce Anderson explained. "A large cold-air trough over the north-central U.S. got hemmed in by a very warm upper-level ridge of high pressure in the Canadian Prairies. This pattern brought much-below-normal temperatures to many areas."

It also brought welcome rain to many, he said. "Precipitation was focused in the south-central and eastern areas, which were on the edge of that cold upper low and in the boundary between large air masses where we typically find storm formation."

For some, that moisture was a bit much. Kyle Samp thinks the spigot might be stuck in the on position above north-central Missouri where he farms. His fields have received more than 5 inches of rain since Sunday, with more on the way. "I think I could have gone water-skiing on several of our fields today," he quipped.

Other Farm Advisers were much more grateful for the moisture they received this month, none more so than northeastern Colorado farmer Marc Arnusch, who was considering idling most of his acres last month in the face of severe drought conditions. Now, thanks to timely rains, his operation has some irrigation water allocations to work with. It's only 30% of their normal supply, but Arnusch isn't complaining. "Our moisture levels have improved significantly since last month," he wrote. "Our corn planting conditions were excellent, and we should see stands coming up in the next five to seven days."

Mike Lass, who farms and ranches in the Texas Panhandle, was similarly thrilled for recent rains, which have greened up pastures and lightened spirits. "The spring thunderstorms have arrived; the irrigated crops are going in and dryland will soon follow," he said. Central Kansas farmer Kyle Krier is also enjoying a rare season of plentiful moisture in the Sunflower State, and recent rains helped move Keith Peters' central Ohio operation out of a concerning dry trend, as well. In northeast Arkansas, Reed Storey is feeling a bit like Goldilocks -- not too wet, not too dry. "I would say soil moisture is good, but not excessive," he said.

Unfortunately, that trapped cold air this month kept a lot of northern and north-central parts of the country dry, Anderson noted. That was bad news for the Northern Plains and northern Corn Belt, where drought has deepened and become more dire, particularly in the Dakotas. Central North Dakota was assessed in exceptional drought this week, its worst condition since the summer of 2017, Anderson noted.

Dry conditions are deepening in southern Minnesota, as well, where precipitation is running at 6% of normal this spring for farmer Mark Nowak. His corn has mostly come up, with the exception of 80 acres that got an anhydrous ammonia application earlier this spring. "There was no moisture to disburse the nitrogen gas, and so now, the seeds are suffering burn," Nowak explained.

The only silver lining? "The top 3 inches are so dry, weeds are not even germinating," he added. That's a small blessing, since preplant soybean herbicides he applied are unlikely to activate in the absence of moisture.

Some temporary relief might be on the way to these parched Northern producers, but the long-term outlook does not bode well, Anderson said.

"We are seeing some moisture in the Northern areas this late week that will ease drought, but long-term relief is not going to happen with just one precipitation event," Anderson said. "Longer term, drought outlooks have drought either continuing or getting more intense in a big swath across the northern Midwest, and then continuing over almost the entire Northern Plains and all of the Western U.S. along with western Texas."

About a third of DTN's Farm Advisers reported they have finished their planting season. In northeast Arkansas, Reed Storey has wrapped up corn and soybean planting the earliest he could recall; now he's working on weed control. "When we started planting soybeans, we were really cool, nothing was growing and we planted like no tomorrow," he noted. "Then we warmed up and weeds grew."

Farmers in Colorado and Minnesota also reported a rapid end to the planting season but at the steep price of seriously dry conditions. Dry weather has also moved spring planting along for Jennie Schmidt, who farms on the Eastern Shore of Maryland and who -- up until the past month or two -- was reeling from frustratingly wet weather. Schmidt is done with corn, halfway through soybeans and expects to start June 5 with green beans, a crop she has to stagger with other growers, so the market gets a steady supply of fresh beans throughout the summer.

Planting was underway and ahead of normal for the rest of the Farm Advisers. Kansas' Krier finished corn planting and is near the end of soybean planting. Once ground dries up more, he'll tackle milo. In north-central Missouri, things were moving at such a brisk clip that Samp purposely put the brakes on. "We could have already finished planting, but we decided to intentionally slow down to spread things out a bit," he said.

Things are a little slower in the Eastern Corn Belt, with Ohio's Peters about 70% done with corn and 45% done with soybeans.

But while planting has sped ahead of the average pace for both corn and soybeans, emergence didn't always keep up this spring. (See more from DTN on that here: https://www.dtnpf.com/….) Farm Advisers from Colorado, Ontario, Kansas, Missouri, Minnesota, Ohio and Arkansas all reported being a little low on the all-important heat units needed to get corn and soybeans off to the races.

"We could use more heat at this point to fully head out our wheat and get soybeans and corn moving forward," said Krier. This week's warmer temperatures have been a balm to the crops that have emerged in central Ohio, said farmer Keith Peters. "Everything that is up looks pretty good now," he said.

See where DTN Farm Advisers were at this time last year here: https://www.dtnpf.com/…. 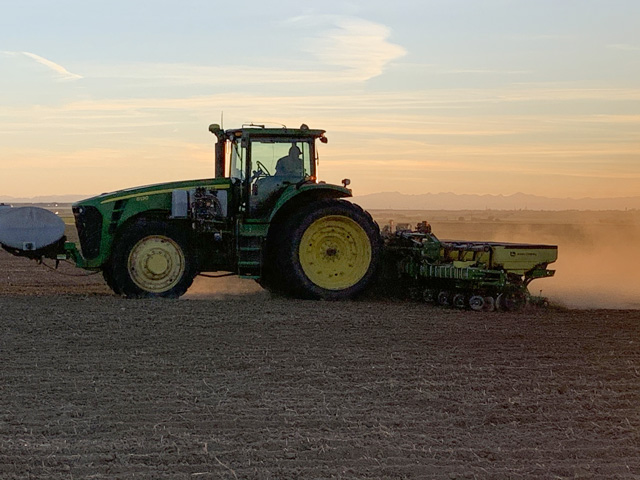