ROCKVILLE, Md. (DTN) -- With crop fields simmering in the early July heat, some farmers are missing those soggy days of spring.

"Too much rain early on was the hold-up; now we NEED rain and can't buy one," said Genny Haun, who farms in northwest Ohio. "I'm fearful crops will begin to go backwards if we do not get a measurable rain soon."

It's a common summer tale, and one that was echoed by farmers across the country when DTN consulted its Agronomy Advisers this week, a group of trusted farmers and ranchers who report on crop conditions and current events in agriculture throughout the season.

From Texas up to Ontario, and from Ohio out to the Rockies, farmers are watching the weather carefully as the corn crop enters the critical stage of pollination, soybeans begin flowering and spring cereals start grain fill.

"Drought conditions have begun in the Northern Plains and in the Eastern Midwest and have intensified and spread in the Southern Plains," noted DTN Senior Ag Meteorologist Bryce Anderson. "In the Eastern Corn Belt -- Michigan, parts of Illinois, Indiana and Ohio -- soil moisture conditions have really tailed off from very saturated to now dry, even borderline drought. I've also heard comments from the southwest Plains that the pivots have been running almost non-stop since planting began."

HOW HOT IS TOO HOT?

In some parts of the Corn Belt, soaring temperatures aren't worrying farmers just yet.

"We have had 14 inches of rain in the month of June here in southeast Iowa, so we are going into this period of hot weather with a full tank of moisture," said Iowa farmer Mike Berdo. Likewise, in southwest Indiana, Scott Wallis caught a nice rain last week and his corn and soybeans are thriving.

"The heat here is coupled with high humidity -- hard on humans but good for the crops," he noted.

In parts of Missouri and Kansas, good subsoil moisture is keeping spirits up and crops healthy, but overly dry conditions are on the horizon.

"The corn has recovered from a really wet spring, and it's nice to have the beans root down a little," noted north-central Missouri farmer Kyle Samp. "Nothing is hurting yet, but it won't be much longer before we are wanting a rain." In central Kansas, cool nighttime temperatures are keeping the worst effects of the July heat at bay, added farmer Kyle Krier.

Minnesota farmers Justin Honebrink and Mark Nowak are also watching crops thrive in the summer sun -- thanks to a deep well of soil moisture -- but with an anxious eye toward dry conditions. "Another month might change my attitude, but for now it looks good," Honebrink said.

Elsewhere, normal summer heat and dryness has tipped into drought.

"Hot and dry is the storyline out here in the desert," said Texas Panhandle farmer and rancher Mike Lass. "The majority of dryland crops have failed."

Pivots will be running hard in eastern Arkansas this month, farmer Charles Williams added. And in central Ohio, Keith Peters is grateful for the overgrown rye cover crop he struggled to terminate this spring, now that its residue is providing much-needed cover for soil moisture in his crop fields.

In Michigan and Ontario, farmers are watching crops start to go downhill.

"With two weeks of 88- to 94-degree days, and no rain beforehand to help, corn is really starting to suffer," said southern Ontario farmer Dan Petker. "The heat stress and lack of significant rain couldn't have come at a worse time for the winter wheat and cereal rye crops. We had perfect conditions at pollination, but now during grain fill, we're seeing stress and fast die-off, rather than proper maturing."

Farmers reported a range of crop development -- from brown silks in corn in Arkansas and cotton starting to bloom in Texas, to the first tassels poking out in Iowa and Indiana, and beans just starting to flower in Missouri.

Winter wheat harvest is well underway, as well. Ohio's Peters expressed relief at how well his wheat fields had yielded, as he headed back into the field for double-cropped soybeans.

As summer deepens, the pest spectrum is widening. The shiny backs of Japanese beetles are catching eyes in Missouri, Samp noted. "We'll have to keep an eye out for silk clipping again this year," he said.

In Kansas, Kyle Krier is monitoring head worms in sorghum and soybean loopers on his soybeans.

Armyworms marched through the northern Corn Belt with a vengeance recently, added Michigan's Simpkins and Ontario's Petker. And soil-borne insects were so intense in both states that they chewed through full insecticide doses coated on seeds in some fields, both noted.

For others, weed pressure will be the season's biggest pest. Spray windows this spring and summer were limited by both weather and, in the case of dicamba, court decisions and state cutoff dates.

Pigweed plagues Arkansas' Williams, where Xtend crops still dominate the state despite Arkansas' continued use of restrictive cutoff dates for dicamba use. Farther north, waterhemp and marestail were at the top of Agronomy Advisers' problem weeds.

"The weeds took off a little late, but once they did, they grew faster than expected," Minnesota's Honebrink noted. Fortunately, residual herbicides held up well in some of his fields, and he managed to clean up the fields where weed pressure broke through. A lot of work -- but no complaints, he concluded.

"With everything else going on right now, the farming aspect of life is looking great," he said. "Hopefully, it stays that way through fall." 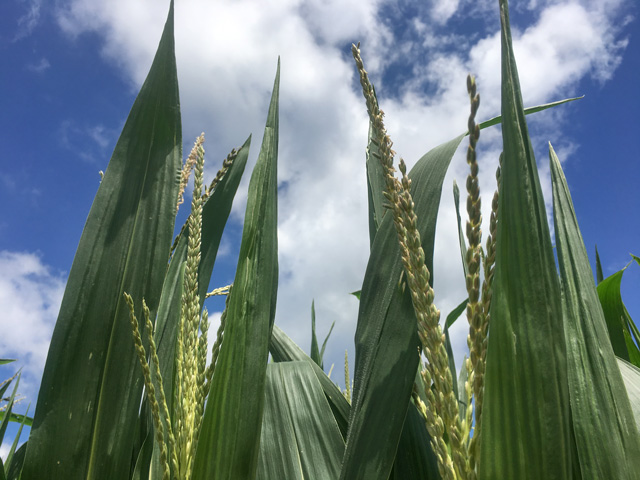