These thirsty plants are clearly battling moisture stress, but the bigger question remains: when do those rolled leaves and wilting bean branches actually translate to lost yield?

University of Minnesota crop scientists tackled this topic for the state's growers in a recent newsletter, and DTN checked in with one of them, Extension Corn Agronomist Jeff Coulter, for help answering this question.

The biggest takeaway? Drought stress early in the season isn't as damaging as drought stress that continues through or occurs later in the season. For corn, drought and heat stress start taking their greatest yield toll after the V13 growth stage; for soybeans, it's closer to seed filling, as the plant enters R5.

That's good news for the farmers who saw much needed rainfall this past weekend, noted DTN Ag Meteorologist John Baranick.

"Drought areas in southern Iowa, northern Illinois, and southern Michigan really benefited from the rainfall over the weekend," he said. "There were good strips of more than 2 inches to help reduce the drought that has been building over the last couple of months. Some of it did come down a little too heavy with some runoff, but for the most part, the rain was useable."

But many others watched rain chances dissipate on the radar -- or never appear at all.

"Areas that missed out completely were much of South Dakota and Nebraska, southwest Minnesota, and even northwest Iowa," Baranick reported. For some, rainfall amounts that did materialize were pretty scant, generally totaling half an inch or less, he added. "The rain that fell over North Dakota and northern Minnesota was helpful, but only slightly as the intense drought continues."

For these growers, all eyes will remain on those drought-stressed fields. There are rain chances ahead this week. A similar storm system is shaping up that could scatter rainfall across the Corn Belt, with Iowa seeing some of the best chances for widespread, heavy rains, Baranick said. Overall, the Eastern Corn Belt will probably see more than the western regions.

"As far as the drought areas, those in the Eastern Corn Belt continue to show signs of likely improvement while those in the west, especially in the Dakotas and Minnesota likely will not see enough rain to put much of a dent in the ongoing drought," Baranick concluded.

With that in mind, here's a quick review of how drought-stressed corn and soybean plants will manage if more hot, dry days lie ahead, starting with corn.

By the V3 growth stage in corn, the plant is mostly relying on its nodal root system -- a group of roots often called brace roots, which become visible above soil later in the season.

Drought stress early in the season can complicate that, Coulter explained. "When it's dry, that makes it hard for the nodal roots to fully develop because they develop at around three quarters of an inch below the soil surface," he said.

By V5, corn plants with underdeveloped nodal roots can be spotted as the heavier plant begins to lean. Worse yet, these plants are less able to take up much needed water from deeper in the soil profile.

The good news is that if plants finally do receive adequate moisture, they can grow additional, better developed nodal roots in the freshly watered soil, Coulter said. "If we get moisture soon, those plants will be able to have more nodal root development and can recover to some degree," he said.

But they'll still be at higher risk for lodging later in the season, so even if rain comes, make a note of fields that showed this problem in June.

This is indeed a critical time for the corn plant, Coulter noted. The width of the corn ear, or the number of kernel rows, is being established between V5 and V8.

The good news is that much of that size determination is a function of genetics, Coulter said. "It's less influenced by the current growing environment, although that can have some impact," he explained.

The potential number of corn kernels -- how many little seats the corn plant will set up in its ears' rows, ready to be filled -- is also starting to be established around V5. And unlike ear girth, this number can be readily affected by the environment.

"If we have stress during that period, the number of kernels can be reduced a little bit, but it's typically not a huge problem," Coulter explained. "Because that's just the number of potential kernels." These tend to be more abundant than the actual final number of kernels, which are determined by how successful pollination is and how many are retained throughout the season, he said.

Around V13, the game changes, and heat and drought stress become a more serious yield threat, Coulter explained. "The critical period for corn is typically between 10 days before silking to 14 days after," he said.

High temperatures and moisture stress can delay those emerging silks, but at the same time, the stressed corn plant speeds up its pollen shed. "This little bit of mismatch can cause a quite a big yield reduction," Coulter said. See more on that dynamic here: https://www.agry.purdue.edu/….

So, expect greater yield loss from drought-stressed plants at V13 and beyond, with losses dependent on the intensity and duration of that dryness through July, Coulter concluded.

In the face of heat and dryness, they shy away from light, tilting their leaves strategically to avoid sunlight and slowing leaf growth to conserve water and energy, he noted. Instead, the plant puts that energy into its root development, sending them deeper in search of moisture.

"From a practical standpoint, significant drought stress during the vegetative period of soybean development primarily pauses plant growth," Naeve explained. "Leaf expansion is slowed or stopped and only under severe drought does photosynthesis slow or stop."

Surprisingly, despite this reduced growth rate, it's only at R1 that these drought coping mechanisms can begin to chip away at yield, Naeve said. Ultimately, the greatest yield reductions come when the plant must turn its attention to filling the seeds it has set, he added.

"(S)oybean is quite resilient to most stressors through early reproductive growth," he wrote. "... While stresses during seed filling can have a large effect on seed yield, little research, including that on drought, has demonstrated significant yield losses to stressors prior to seed filling."

See more on why corn leaves roll their leaves up under drought stress here: https://www.dtnpf.com/…. 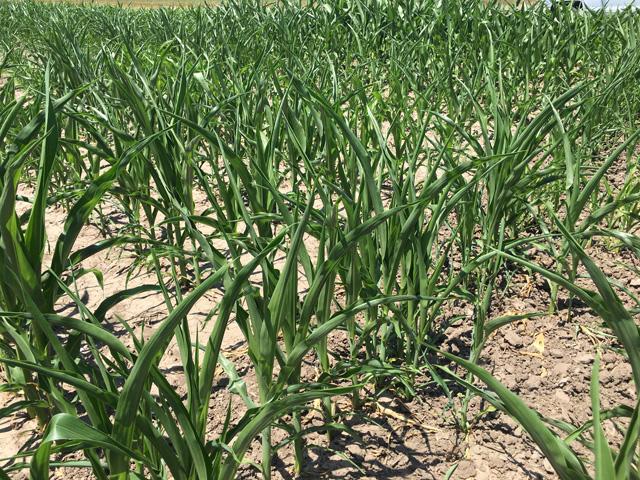