Cotton: The December 2018 contract closed at 92.36 (cents per pound), up 5.71 cents for the week. The new-crop contract extended its sharp rally last week to a new high of 93.73. However, with weekly stochastics still well above the overbought level of 80% Dec cotton has increased its vulnerability to renewed selling, leaving little support underneath. Initial retracement support is down at 86.03.

Cocoa: The July 2018 contract closed at $2,458 (per metric ton), down $98 for the week. The contract remains in a secondary (intermediate-term) downtrend with the initial signal being a bearish crossover by weekly stochastics above the overbought level of 80% the week of April 2. Next support is at $2,385, the 50% retracement level of the previous uptrend from $1,826 through the high of $2,943. However, with weekly stochastics still above the oversold level of 20% the contract could test support at the 61.8% retracement level of $2,253. 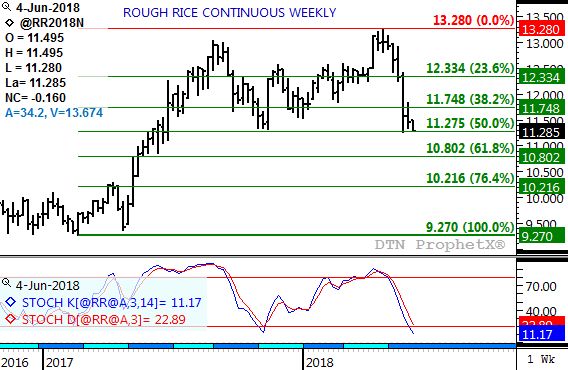